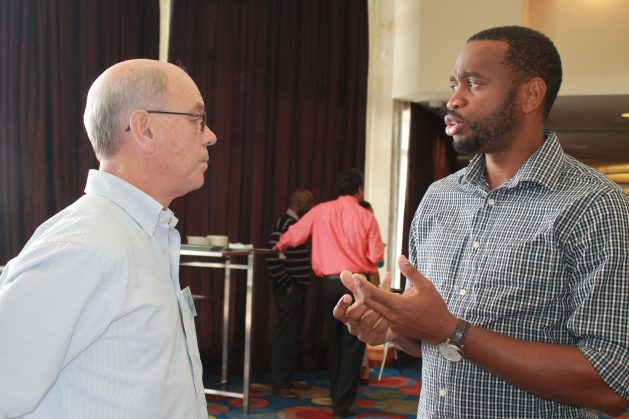 Dr. Donneil Cain (right), the Caribbean Community Climate Change Centre's (CCCCC) project development specialist who worked with the BWA on the Barbados Water Resilience Nexus for Sustainability Project, in discussion with Dr. Adrian Cashman from the University of the West Indies, Cave Hill on the educational institutions that assisted with the project's development. Credit: Zadie Neufville

BRIDGETOWN, Apr 19 2018 (IPS) - At the start of 2017, the Caribbean Drought and Precipitation Monitoring Network (CDPN) warned eastern Caribbean countries that they were facing “abnormal climate conditions” and possibly another full-blown drought.

For Barbados, it was dire news. Previous drought conditions impacted every sphere and sector of life of this historically water-scarce country. But a new project promises a new water future for Barbadians by increasing the awareness of islanders to the water cycle and the likely impacts of climate change on the island’s drinking water supply.

The project is being funded by the Green Climate Fund and is a collaborative effort between the Caribbean Community Climate Change Centre (CCCCC) and the Barbados Water Authority (BWA) with assistance from University of West Indies, Cave Hill Campus (UWI-CHC), and University of South Florida (USF).

WSRN-Barbados was one of several Caribbean funding commitments announced at the GCF 19th Board meeting in Korea in February to the tune of 45.2 million dollars (including 27.6 million in GCF funds and counterpart funding of 17.6 million from the BWA).

He explains that within the project, there are provisions for collaboration among academic partners like UWI-CHC and USF. The aim is to develop a sharing platform that will serve as an incubator for novel ideas that will boost efforts to combat the impact of climate change and propel the discussion on climate change adaptation and mitigation.

“This project proposes to gather the relevant human resources from these institutions and form a team of scientists and engineers to drive the in-depth operational research to build capacity,” Dr Cadogan explained.

The WSRN S-Barbados project will replace 16 kilometres (about 10 miles) of existing mains to reduce leakage by 0.03 MGD per km. This is expected to result in greater availability of water, which when valued at current costs, is an avoided expense to society of 1.3 million dollars.

“Increased availability of water will reduce the instances of water outages currently being experienced by many customers,” Dr. Cadogan explained.

“Previous instances of outages have had the adverse effects of persons reporting for work late or absent from work and businesses closing. Schools have had to close due to lack of water and the potential unsanitary conditions are likely to increase health treatment costs. In addition, there have been some cancellations of tourist stays and bookings,” he continued.

Tourism is one of the backbones of Barbados’ economy. In 2014, the total contribution of tourism and travel accounted for 36.1 percent of Gross Domestic Product (GDP) and employed 37.5 percent of total employment (WTTC, 2015).

Another vital sector is agriculture. Agriculture, which in 2014 contributed 1.4 percent (value-added) of GDP and employed 2.7 percent of total employment (WDI, 2016), is essential for food and nutrition security and household income.

From the feasibility study, it was found that Barbados’ already dwindling water resources are not sufficient to meet demand in the medium to long terms. Implicit in that analysis is the demand for water by the tourism and agriculture sectors.

“This project contributes to the stability of Barbados’ macroeconomic environment, mitigates its susceptibility to inflationary pressures and external shocks and increases revenue to the government,” Dr Cadogan said.

“Barbados will benefit from foreign currency savings resulting from reduced dependence on fossil fuels due to the installation of photovoltaic panels. Barbados imported 322.7 million dollars of crude oil (2014 figures) and a significant portion is used in the production of electricity and transportation.”

The WSRN S-Barbados project will ensure that there is improved resilience to climate change and that communities have access to clean potable water.

With respect to vulnerable populations as well as hospitals, polyclinics, schools and community centres, water tanks for water storage will be installed.

The project is expected to create 30 new jobs at the Belle Pumping Station, while the efforts to implement rainwater harvesting initiatives will create another 15 new jobs.

“In addition, the BWA will also ensure that Barbados plays its part to reduce the fossil fuel consumption by engaging in renewable energy solutions by the use of photovoltaic technologies. By using RE technologies, this would ensure that the Government of Barbados would have some stability with respect to tariffs and therefore be able to assist the most vulnerable on the island,” Dr Cadogan said.

“It is also envisioned that there will be (a) enhanced capacity, knowledge and climate resilience in institutions, households and communities, (b) improved knowledge on water conservation and recycling and (c) improved policy and legislative environment for climate proofing and building climate resilience,” he added.

Meanwhile, over at the CCCCC, the regional agency charged with coordinating the region’s response to climate change, project development specialist Dr. Donneil Cain, the point man on the WSRN-Barbados, is looking for the next opportunity for resilience-building in the region.

“This is why we do it,” he said. “The satisfaction comes from getting these projects up and running.”