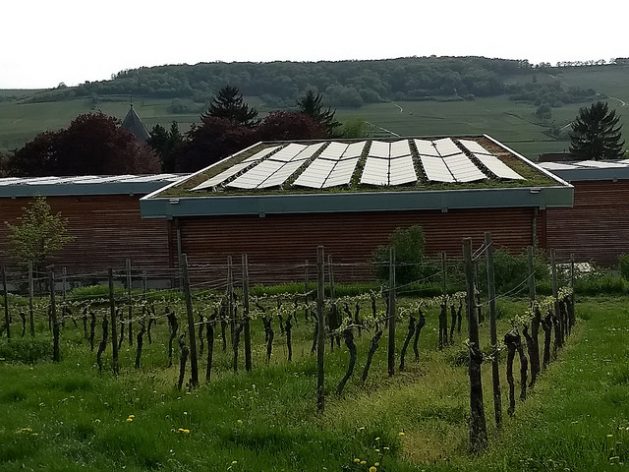 Public buildings and businesses, such as this organic vineyard in the town of Ingelheim-Großwinternheim in the western state of Rhineland-Palatinate, have embraced renewable energy in Germany to encourage citizen participation, create local employment, promote the local industry and protect the environment. Credit: Emilio Godoy/IPS

WÖRRSTADT, Germany, May 24 2018 (IPS) - “It made me angry that a company from outside the region was making money from renewable energy and I wondered why people weren’t getting involved,” says Petra Gruner-Bauer, president of the German co-operative SolixEnergie.

So Gruner-Bauer, founder of the organisation, began to raise awareness among her neighbours in Wörrstadt, a city in the western state of Rhineland-Palatinate, about what a co-operative was, the importance of citizen participation and community benefits.

“I wrote down on a piece of paper the things that needed to be changed and tried to convince people, and they got involved. It’s the power of people. We are at the same time members and entrepreneurs, we focus on making sure that each person receives renewable energy,” she told IPS in an interview.

The cooperative, which has 116 members, was set up in 2011 and has already developed two solar panel projects and a wind farm, generating more than seven million kilowatt-hours a year, benefiting 5,000 people in a town of 30,000.

To become a co-op member, the minimum investment is 1,022 dollars, and this year the rate of return on capital is less than one percent.

This co-operative is one of 42 of its kind operating in the energy sector in Rhineland-Palatinate, a state that has been a pioneer in the development of alternative renewable energy sources in Germany, generating 10,000 jobs. Nearly 50 percent of the region’s energy supply is based on renewable sources.

At a national level, energy co-operatives currently comprise 900,200 members, with an investment of some 1.83 billion dollars.

In 2016, German individuals and co-operatives owned 31.5 percent of the renewable energy facilities, making it the segment that receives the most investment in the energy sector, according to a study published in February by the German consulting firm Renewable Energies Agency.

German co-operatives have been instrumental in the progress made towards the country’s energy transition by fostering citizen empowerment, producing energy locally, providinga source of socio-economic wellbeing and reducing polluting emissions.

Of the basket of alternative energies, 36 percent of electricity generation comes from renewable sources, such as wind power, biomass, solar, hydroelectric and waste.

The energy transition, through a gradual replacement of fossil fuels with environmentally friendly alternatives, is part of the mechanisms established at the global level to contain global warming.

“Energy co-operatives are a very safe and easy way to participate in the energy transition, investing little money. They are highly decentralised, they help strengthen the local value chain, encourage public support for the transition and unleash financial potential,” Verena Ruppert, president of the Network of Citizen Energy Co-operatives of the State of Rhineland-Palatinate, told IPS.

This network brings together 24 members, 22 of which are energy co-operatives, which in turn comprise 5,000 individuals and more than 200 businesses, communities and religious organisations. The members of the co-operatives have invested some 85 million dollars in solar roofs, wind farms, biogas plants and residential retrofit projects. 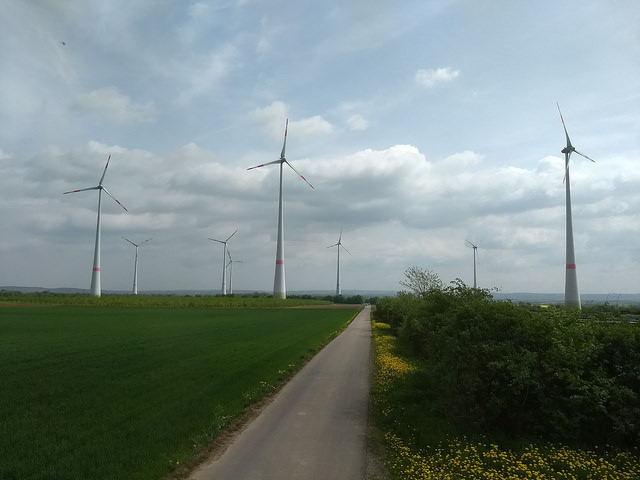 Based on wind and solar energy, Germany is moving towards a future based on alternative energy sources, such as with this private wind farm in the city of Wörrstadt, in the state of Rhineland-Palatinate. Credit: Emilio Godoy/IPS

These energy cooperatives have a favourable environment in Germany, which facilitates their leadership in this field, as is also the case in Australia, Denmark and the United States, leading models in the industry.

In contrast to Germany, in Latin America these co-operatives have not taken off, except in a minority of countries, despite the benefits they offer.

In countries such as Mexico, Peru and Venezuela, laws related to co-operatives recognise their role in various sectors, such as energy, but electricity regulations create barriers blocking their development.

The legislation does facilitate a role for co-operatives in countries such as Argentina and the Dominican Republic, while Bolivia, Colombia and Costa Rica also have regulations aimed at promoting such participation.

In Argentina, a country of 44 million people, energy co-operatives date back to the 1990s and already cover 16 percent of the domestic market, with some 500 electric co-operatives comprising more than one million members, according to figures from the Buenos Aires Federation of Electric and Public Services Co-operatives.

In 2016, the government of the northern province of Santa Fe created the Prosumidores– a play on words combining “producers” and “consumers” -Programme, which finances citizens who go from being mere consumers to also becoming producers who generate electricity and sell their surplus to the grid.

Brazil, for its part, has provided financial incentives since 2016 for distributed (decentralised) small-scale solar energy systems to enable individuals and businesses to generate their own electricity.

This is highlighted in a report published in September 2017, “Renewable Energy Tenders and Community [Em]power[ment]: Latin America and the Caribbean“, prepared by the international Renewable Energy Policy Network for the 21st Century (Ren21).

These Costa Rican entities generate some 400 megawatts – mainly from hydroelectric power plants and a small volume of wind power -, comprise more than 200,000 members, provide electricity to some 400,000 customers and employ almost 2,000 workers.

Since 2015, Chile has also been promoting participatory generation through the government’s Energy Commune programme, which seeks to promote efficiency through the use of local renewable energies and for which it has created a community fund.

So far, the initiative manages eight projects in six municipalities and has organised two calls for proposals for more than 112 million dollars for the benefit of 34 communities.

The German transformation formally started in 2011, based on six laws that favour alternative generation through a surcharge for producers, the expansion of the electricity grid to encourage the incorporation of renewables and cogeneration to take advantage of energy wasted in fossil fuel facilities.

The reform of the Renewable Energy Law, in force since January 2017, set a fixed rate for the sector – fundamental for the progress made in renewables – and created auctions for all sources.

The changes reward those who generate electricity at a lower cost, impose generation caps, and limit the setting of fixed tariffs only for cooperatives and small producers.

In Mexico, the Electricity Industry Law, in effect since 2014, makes it possible to launch local projects generating less than one megawatt, but virtually excludes them from the electricity auctions that the government has held since 2016.

At least 12 countries in the region organise renewable energy auctions that, because of their financial, technical and business requirements, exclude cooperatives, preventing them from further expansion.

That’s not the case in Germany, where they are now aiming for a new stage.

“The transition needs heating and transportation. We don’t want to focus only on power generation, but also on environmental protection,” said Gruner-Bauer, whose organisation is now moving into electric car sharing to reduce use of private vehicles.

Ruppert said they can cooperate with Latin American organisations. “But it’s a decision of the board of directors. We can help, but first we need to know the needs of co-operatives,” he said.

The REN21 report recommends reserving a quota for participatory citizen projects and facilitating access to energy purchase agreements, which ensures the efficiency of tenders and the effectiveness of fixed rates for these projects.

This article was made possible by CLEW 2018.