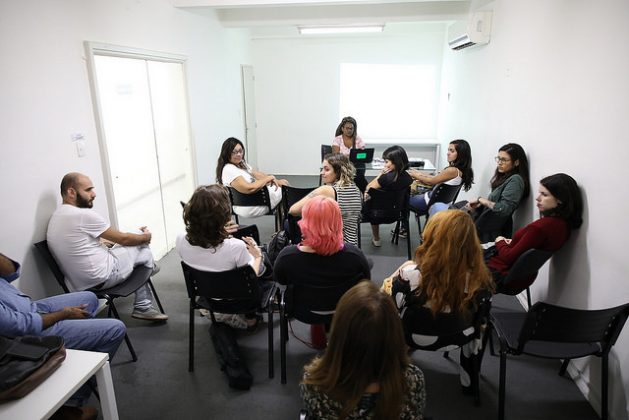 The first meeting of women media workers from Mídia Ninja, at the organisation's headquarters in downtown Rio de Janeiro. Driáde Aguiar (front), coordinator of the initiative to help women candidates in their campaigns in Brazil’s October elections. Credit:: Gonzalo Gaudenzi/IPS

BUENOS AIRES, Aug 10 2018 (IPS) - An alternative network in Brazil promotes women’s participation in elected offices with media support. This campaign, like others in Latin America, seeks to reverse a political landscape where, despite being a majority of the population, women hold an average of just 29.8 percent of legislative posts.

It is the first meeting in Rio de Janeiro, and journalists, press advisors, social media activists, designers, photographers, video producers, all interested in participating in the Women’s Campaign launched by this alternative collective of citizen journalists, are beginning to arrive at Mídia Ninja‘s headquarters.

“The general idea of the campaign is to support women to have a real chance of being elected,” Mídia Ninja coordinator Driáde Aguiar told IPS.

The elections in Brazil are approaching, in which the president, state governors, and members of parliament will be elected on Oct. 7, and there is little time left for debate.

"There are multiple and varied obstacles and for those who do or try to do so, it means facing a set of discriminatory practices, stereotypes, a culture of privilege, cultural patterns and models that has not been, and still is not easy to confront." -- Alejandra Valdés

Aguiar and the women communicators are organising without much ado. Receiving a list of more than 100 female candidates who registered as soon as the call was launched, they check their time availability, distribute tasks, set up teams, and establish campaign guidelines.

Midia Ninja summons them so that each one, in relation to her expertise and time availability, can prepare campaign videos, posters, press releases, and materials to disseminate through social networks, and train them in how to communicate their ideas.

The aim is to “demonstrate that politics is also for women,” they underscore during the meeting.

Although Brazil’s election laws establish that each party or political coalition must include a minimum of 30 percent and a maximum of 70 percent of candidates of each sex, the rule is not applied rigorously.

In addition, there are 13 women in the 81-member Senate and seven male council members for every woman in the city councils.

The requisites for women candidates to participate in the Women’s Campaign are that they have a “progressive, democratic and feminist” electoral platform, for example “that they will fight to end violence against women or fight for equal pay.”

“We are looking for feminist candidates who take women seriously in their programme,” Aguiar said.

Daniella Monteiro, candidate for provincial deputy for the Socialism and Freedom Party (PSOL), said the campaign, in which she is registered, “promotes a necessary debate.”

In an interview with IPS, she pointed out that women are responsible for child-rearing and housework, meaning a double workday, besides often having to deal with problems in their communities.

“And this is the situation for middle-class women and for black women in the favelas (shantytowns), who also do all this without help, without a family structure and without access to adequate rights such as health, education and public safety,” she said.

“To have women in politics is to consider those patterns necessary for society as a whole but especially necessary for women. It means thinking about women as political beings,” added the candidate, who comes from a favela and was the first in her family to graduate from the university, in Social Sciences.

Monteiro recalled that many women “did not become candidates by chance” but as a result of the social movements they represent.

“For example, I am Dani Monteiro, from the black youth movement, from a favela… but outside the campaign I am a black woman who faces a structural problem on a daily basis,” which is expressed in difficulties of all kinds when it comes to participating in politics, she explained.

Monteiro wonders if women who “run a household and who have to feed four children on a minimum wage” do not understand more about administration than an economist who holds a PhD.

“The biggest challenge is to take up this practice of day-to-day politics that we already carry out and that is not seen as political activity,” she said.

But for her it’s not enough to be a female candidate. For example, she said, on the Rio de Janeiro city council, there are women members who “undermine, rather than defend, women’s issues,” such as the gender debate in schools.

Despite situations like that of Brazil, not everything is complicated in Latin America.

Mabel Bianco, president of the Foundation for Studies and Research on Women (FEIM), told IPS from Buenos Aires that “in general, progress has been made in terms of women’s political participation, especially in legislative posts, due to the adoption of positive discrimination laws and mechanisms.”

She also attributed it to positive campaigns like the “50/50 Parity is Now!” campaign conducted in Bolivia in 2014 by Oxfam and other organisations.

That campaign “managed to get the Electoral Court to issue a ruling indicating how the positive discrimination mechanism should be applied in the elections of that year,” Bianco said.

“In addition, they drafted a women’s policy agenda with a series of proposals for the candidates to use in their campaigns and then in their legislative performance,” she said.

“Bolivia set an important example as a result of this campaign that mobilised not only women politicians but also women from social movements, and which achieved parity,” Bianco said.

In fact, according to UN Women, Boliva is one of only two countries in the world (following Rwanda) where the proportion of seats held by women in parliaments is over 50 per cent.

Bianco also cited the case of Argentina where last year Amnesty International and the Latin American Justice and Gender Team (ELA), based in Buenos Aires, launched a campaign for gender parity called “A woman’s voice has the same value as a man’s,” with posters of well-known male legislators wearing lipstick.

“There was also strong support of women from NGOs and social movements with actions in parliament and mobilisation in the streets,” she said.

Alejandra Valdés, of the Gender Equality Observatory of the Economic Commission for Latin America and the Caribbean (ECLAC), told IPS that “although the presence of women in decision-making positions has grown, there is still no balanced representation.”

“There are multiple and varied obstacles and for those who do or try to do so, it means facing a set of discriminatory practices, stereotypes, a culture of privilege, cultural patterns and models that has not been, and still is not easy to confront,” she said from ECLAC’s headquarters in Santiago, Chile.

In addition, she said, “reduced access to financial resources and time also creates resistance to change. Parity must involve changes in democratic systems.”

According to Valdés, the presence of women in Latin American parliaments as of May 2018 was 29.8 percent, reflecting a tiny increase of 0.78 percent with respect to the same month in 2017.

In 15 countries, by contrast, fewer than 20 per cent of legislators are women, and in Haiti and Belize the proportion is below 10 per cent.