This is an op-ed contributed by the Caribbean Community Climate Change Centre (CCCCC). 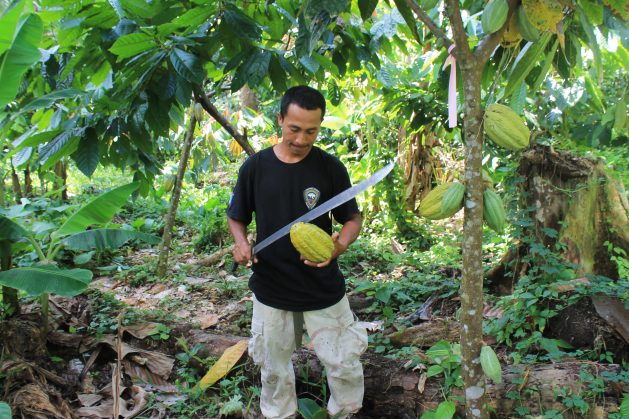 Magnus Tut a member of the Trio Cacao Farmers Association cuts open a white cacao pod from one of several bearing treen in his plot. The group is hoping to find more buyers for their organic white cacao and vegetables. Credit: Zadie Neufville/IPS

BELMOPAN, Sep 5 2018 (IPS) - In one of Belize’s forest reserves in the Maya Golden Landscape, a group of farmers is working with non-governmental organisations to mitigate and build resilience to climate change with a unique agroforestry project.

The Ya’axché Conservation Trust helps farmers to establish traditional tree crops, like the cacao, that would provide them with long-term income opportunities through restoring the forest, protecting the natural environment, while building their livelihoods and opportunities. Experts say the farmers are building resilience to climate change in the eight rural communities they represent.

The agroforestry concession is situated in the Maya Mountain Reserve and is one of two agroforestry projects undertaken by the 5Cs, the Caribbean Community Climate Change Centre (CCCCC), in its efforts to implement adaptation and mitigation strategies in communities across the Caribbean.

Close to 6,000 people both directly and indirectly benefit from the project which Dr. Ulric Trotz, science advisor and deputy executive director of the 5Cs, noted was established with funding from the United Kingdom Department for International Development (UK DFID).

“It is easily one of our most successful and during my most recent visit this year, I’ve seen enough to believe that the concept can be successfully transferred to any community in Belize as well as to other parts of the Caribbean,” he told IPS.

The Trio Cacao Farmers Association and the Ya’axché Conservation Trust have been working together since 2015 to acquire and establish an agroforestry concession on 379 hectares of disturbed forest. The agroforestry project was given a much-need boost with USD250,000 in funding through the 5Cs.

According to Christina Garcia, Ya’axché’s executive director, the project provides extension services. It also provides training and public awareness to prepare the farmers on how to reduce deforestation, prevent degradation of their water supplies and reduce the occurrence of wildfires in the beneficiary communities and the concession area.

Since the start, more than 50,000 cacao trees have been planted on 67 hectares and many are already producing the white cacao, a traditional crop in this area. To supplement the farmers’ incomes approximately 41 hectares of ‘cash’ crops, including bananas, plantains, vegetable, corn and peppers, were also established along with grow-houses and composting heaps that would support the crops.

This unique project is on track to become one of the exemplary demonstrations of ecosystems-based adaptation in the region.

The 35 farming families here are native Maya. They live and work in an area that is part of what has been dubbed the Golden Stream Corridor Preserve, which connects the forests of the Maya Mountains to that of the coastal lowlands and is managed by Ya’axché.

Farmers here believe they are reclaiming their traditional ways of life on the four hectares which they each have been allocated. Many say they’ve improved their incomes while restoring the disturbed forests, and are doing this through using techniques that are protecting and preserving the remaining forests, the wildlife and water. 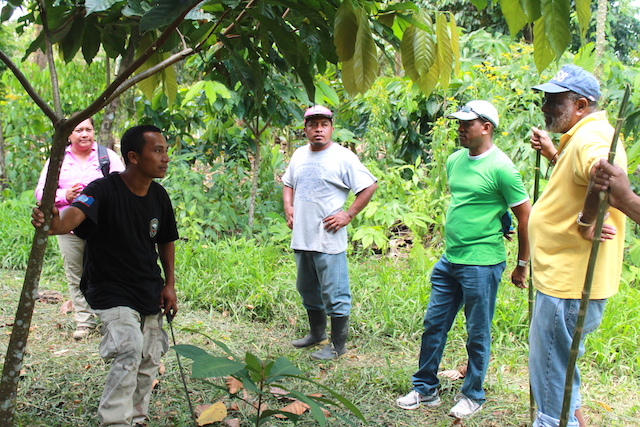 Other members of the communities, including school-age teenagers, were given the opportunity to start their own businesses through the provision of training and hives to start bee-keeping projects. Many of the women now involved in bee-keeping were given one box when they started their businesses.

The men and women who work the concession do not use chemicals and can, therefore, market their crops as chemical free, or organic products. They, however, say they need additional help to seek and establish those lucrative markets. In addition to the no-chemicals rule, the plots are cultivated by hand, using traditional tools. But farmer Magnus Tut said that this is used in conjunction with new techniques, adding that it has improved native farming methods.

“We are going back to the old ways, which my father told me about before chemicals were introduced to make things grow faster. The hardest part is maintaining the plot. It is challenging and hard work but it is good work, and there are health benefits,” Tut told IPS.

The Intergovernmental Panel on Climate Change (IPCC) supports the farmers’ beliefs, reporting that up to 11 percent of greenhouse gases are caused by deforestation and “between 24 and 30 percent of total mitigation potential” can be provided by halting and reversing deforestation in the tropics.

“The hardest part of the work is getting some people to understand how/what they do impacts the climate, but each has their own story and they are experiencing the changes which make it easier for them to make the transition,” said Julio Chun, a farmer and the community liaison for the concession. He told IPS that in the past, the farmers frequently used fires to clear the land.

Chun explained that farmers are already seeing the return of wildlife, such as the jaguar, and are excited by the possibilities.

“We would like to develop eco-tourism and the value-added products that can support the industry. Some visitors are already coming for the organic products and the honey,” he said.

Ya’axché co-manages the Bladen Nature Reserve and the Maya Mountain North Forest Reserve, a combined 311,607 hectares of public and privately owned forest. Its name, pronounced yash-cheh, is the Mopan Maya word for the Kapoc or Ceiba tree (scientific name: Ceiba pentandra), which is sacred to the Maya peoples.

Of the project’s future, Garcia said: “My wish is to see the project address the economic needs of the farmers, to get them to recognise the value of what they are doing in the concession and that the decision-makers can use the model as an example to make decisions on how forest reserves can be made available to communities across Belize and the region to balance nature and livelihoods.”

Scientists believe that well-managed ecosystems can help countries adapt to both current climate hazards and future climate change through the provision of ecosystem services, so the 5Cs has implemented a similar project in Saint Lucia under a 42-month project funded by the European Union Global Climate Change Alliance (EU-GCCA+) to promote sustainable farming practices.

The cacao-based agroforestry project in Saint Lucia uses a mix-plantation model where farmers are allowed to continue using chemicals, but were taught to protect the environment. Like the Ya’axché project, Saint Lucia’s was designed to improve environmental conditions in the beneficiary areas; enhance livelihoods and build the community’s resilience to climate change.

In the next chapter, the Ya’axché farmers project is hoping that, among other things, a good samaritan will help them to add facilities for value-added products; acquire eco-friendly all-terrain vehicles (ATVs) to move produce to access points; and replace a wooden bridge that leads to the main access road.

Tut and Chun both support the views of the group’s chair Isabel Rash, that farmers are already living through climate change, but that the hard work in manually “clearing and maintaining their plots and in chemical-free food production, saves them money”, supports a healthy working and living environment and should protect them against the impacts of climate change.