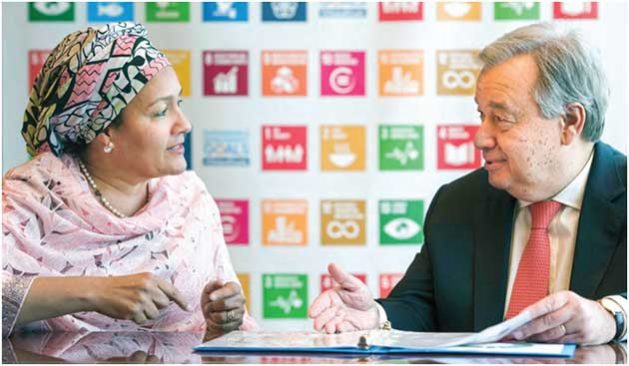 NAIROBI, Kenya, Nov 25 2018 (IPS) - ‘Do not let us off the hook; keep our feet to the fire’. These were the words of the UN Secretary General Mr. Antonio Guterres when he promised to personally lead the global body towards greater gender equality.

As the world observes the start of 16 Days of Activism against Gender-Based Violence today 26 November 2018, an independent United Nations system-wide survey on sexual harassment is taking place around all UN country offices.

It is the first of its kind and it demonstrates the UN’s common resolve to eradicate sexual harassment and ensure a safe and inclusive workplace for all personnel across the UN.

The UN initiative is in lock-step with the theme for this year’s 16 Days of Activism – ‘Orange the World; Hear Me Too’. The aim is to raise awareness on violence against women and its impact on a woman’s physical, psychological, social and spiritual well-being.

The now-famous ‘MeToo’ movement brought out from anonymity the shame that many women were forced to live with, fearing that to reveal the various inappropriate remarks and unwelcome advances they had endured would jeopardise their careers.

Statistics indicate that more than one in three women across the world have experienced physical or sexual violence, usually perpetrated by an intimate partner. In a study by Edison Research and Marketplace on sexual harassment, 27% of women and 14% of men reported that they had been harassed at some time at their workplace.

Despite the progressive policy commitments and institutional frameworks on gender equality and women empowerment, implementation remains slow and inconsistent. To date, the Protocol to the African Charter on Human and Peoples’ Rights on the Rights of Women in Africa has not secured universal ratification.

While the HeForShe campaign has gained high momentum since its launch in September 2014, a lot still needs to be done to bring men on board towards addressing sexual harassment towards women in public and private spaces.

Such campaigns have brought considerable gains towards raising consciousness and self-assurance for women. Increasingly, they are speaking out against the indignities of work-related sexual advances and intimidation.

It is time for another crescendo to rise as we consider the multiple dimensions of gender violence. This is the cost that countries are paying when women are girls are denied the chance to live to their full social and economic potential.

This is the insidious aspect of gender violence that needs the most urgent restitution.

Consider the aspect of employment: according to a World Bank report released this year, countries are losing $160 trillion in wealth because of differences in lifetime earnings between women and men. This amounts to an average of $23,620 for each person.

UNDP in its Africa Human Development Report for 2016 says, “Gender inequality is costing sub-Saharan Africa on average $US95 billion a year”

In education, girls still have catching up to do. While Kenya has done relatively well in balancing school enrolment among genders, there remains work to do towards demonstrating to young women that they have a future after their education. According to a recent survey by Kenya National Bureau of Statistics (KNBS), only about a third of Kenyans in formal employment are women.

Estimates indicate that the return on one year of secondary education for a girl correlates with as high as a 25% increase in wages. In addition, ensuring that all girls get at least secondary education in sub-Saharan Africa, would reduce child marriages by more than half.

All these demonstrate the cyclical benefits, from one generation to the next, of education as an intervention strategy. However, while evidence abounds that parity with women is the best driving force for economic growth, wealth creation and poverty eradication, women’s rights are being “reduced, restricted and reversed”, according to UN Secretary-General Mr. Guterres.

There cannot be any illusions about the enormity of the task ahead. Misogyny is a deep-rooted expression of male entitlement that often excuses sexual harassment and violence, even at times by the victims themselves. For instance, a World Bank Gender Data Portal shows that 76.3 per cent of women in Mali and 92.1 per cent in Guinea believe a man is justified in beating his wife if she goes out without telling him, neglects the children, refuses sex, burns the food or argues with him.

Such attitudes are often rooted far beyond the reach of social media hashtags. Shifts in attitude must begin from the home, before we can expect corporate bodies and national governments to enact gender-sensitive legislation.

The UN in Kenya is taking some concrete steps in this direction, starting with the establishment of a coordination network on protection from sexual exploitation and abuse in the Nairobi duty station.

Women shouldn’t have to feel ‘grateful’ for opportunities says the UN DSG Amina Mohammed in a recent BBC interview. So true. Ultimately, countries need to begin breaking structural barriers, not just with gender equality as a lofty ideal but as deliberate strategy for sustainable development.