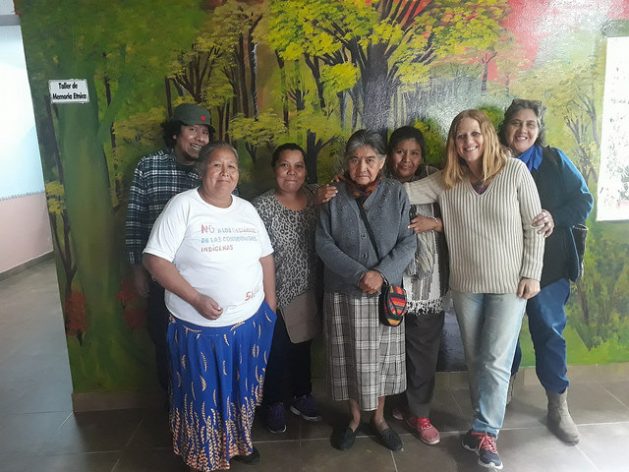 Women who make up the commission that runs the radio station La Voz Indígena, in the city of Tartagal, in northern Argentina, along with one of the operators and Leda Kantor (2nd right), an anthropologist who promoted the project over the past 20 years. Seven different indigenous communities live in Tartagal, just 50 km from the Bolivian border. Credit: Daniel Gutman/IPS

TARTAGAL, Argentina, Nov 14 2018 (IPS) - The seed was planted more than 20 years ago by a group of indigenous women who began to gather to try to recover memories from their people. Today, women are also the main protagonists of La Voz Indígena (The Indigenous Voice), a unique radio station in northern Argentina that broadcasts every day in seven languages.

“At first the leaders asked us why we didn’t stay at home, taking care of the children and grandchildren. Today these men come to take refuge under the roof of these women,” Felisa Mendoza, a Guaraní woman, told IPS in one of the radio station’s large, colourful rooms, decorated with murals painted by indigenous artists.

"Indigenous women are strong. They are the ones who bring home water or firewood. And traditionally, men who got married went to live in their wives' communities. The evictions from their territories have left women at the mercy of men to some extent." --Leda Kantor

The two-storey building is just a few metres from the bus terminal in Tartagal, a city of some 80,000 inhabitants in the province of Salta, just 50 kilometres from the Bolivian border.

On the western edge of the Gran Chaco lowland plain, at the foothills of the mountain ranges that announce that the Andes are not far away, Tartagal was founded less than 100 years ago in a hot land, both in terms of climate and social situation.

The discovery of oil and gas deposits marked the boom and decline of this city and the neighboring city of General Mosconi, whose names are associated in Argentina with the violent social conflict of the 1990s, triggered by massive layoffs at the national oil company YPF, as part of the neoliberal policies of then president Carlos Menem (1989-1999).

Seven indigenous peoples live in this area: Guaraní, Wichí, Chané, Toba, Chulupi, Tapiete and Chorote. While for decades indigenous peoples were displaced from their territories by oil, forestry, cattle ranching and urban expansion, in the last 20 years the trigger has been the expansion of the agricultural frontier.

The daily struggle for land is reflected by the T-shirt worn by Aída Valdez, a member of the women’s commission that runs the station, which reads: “No to the evictions of indigenous communities.”

Valdez brings, to sell at the entrance to the radio station, some vegetables from her home garden. She lives in Yariguarenda, a Guaraní community located 13 kilometers from Tartagal, who are currently facing trial in a process to evict them from a portion of their land.

“We’ve been there for many years. In 1904 the cross of the cemetery of Yariguarenda was erected, because until that moment the Guaraní people buried their dead in their homes. And we need space to plant,” she told IPS later during a visit to her home.

The process of military occupation of indigenous lands near Tartagal, in the 19th and 20th centuries, and the suffering of the Indians were recounted in a 13-episode radio theater, recorded in Wichí and Spanish. 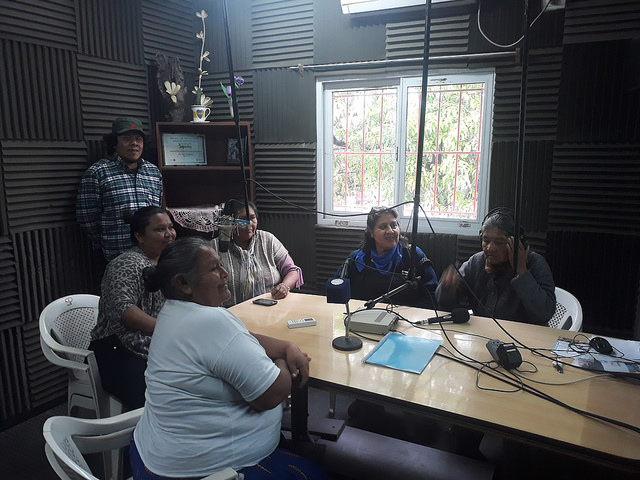 Several women sit in the studio of the La Voz Indígena radio station, which broadcasts in the languages of the seven native peoples of the province of Salta. The radio broadcasts most of its programmes live, such as a 13-episode radio theater, in Spanish and the Wichi language, which shows how indigenous people have been dispossessed of their lands in northern Argentina. Credit: Daniel Gutman/IPS

“The peri-urban communities, for the most part, have been displaced from their places of origin in the forest by occupants who were looking for a place to graze their animals, and lately by the interests of big agriculture,” English anthropologist John Palmer, who arrived 35 years ago to study the area’s indigenous communities, married a Wichí woman and now lives in Tartagal with her and their five children, told IPS.

The latest Argentine census, from 2010, showed that there are 955,032 indigenous people, 2.38 percent of the total population, divided into 31 different native groups, according to figures that specialists consider an under-estimate. In the province of Salta, the proportion triples, with 6.5 percent of the population self-identifying as indigenous.

Although since 1994 the Argentine constitution has recognised indigenous peoples’ communal ownership of the lands they had ancestrally occupied, that right has so far rarely been translated into reality.

The land issue, of course, occupies a fundamental place in the programming of La Voz Indígena, which used to broadcast for 12 hours, from 8:00 to 20:00, but now is only on the air from 7:30 to 15:00, due to the same budgetary restrictions suffered by most people in Argentina, due to the rise in public service rates and inflation.

But the station also tackles other issues relating to the defence of indigenous cultures and languages, the history of their peoples and the lives and rights of women, in programmes that are generally broadcast live and that in the early hours of the morning are devoted to current affairs.

María Miranda, from the Guaraní community of 9 de Julio, told IPS that the radio station fulfills a fundamental task, because “today there are many indigenous people who deny their ethnicity, because they have suffered discrimination. The children no longer know about the history of their grandparents, and we are trying to make sure these things are not lost.”

She revealed that her grandfather arrived in the 1930s to the Tartagal area, walking from Bolivia: “He was a survivor of the Chaco War,” she said, referring to the bloody conflict between Bolivia and Paraguay from 1932 to 1935. 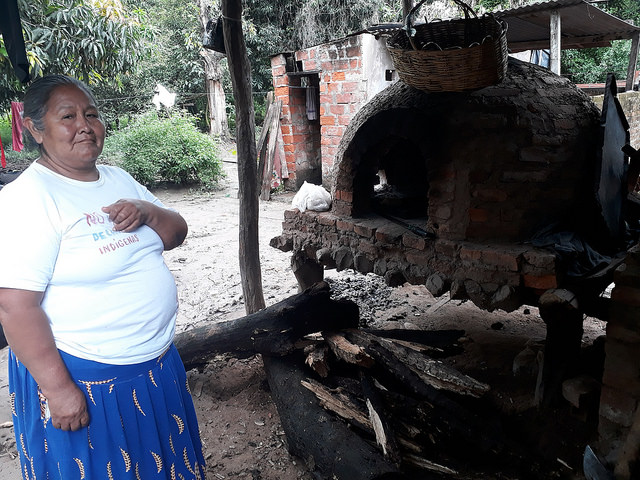 Aida Valdez shows the wood-fired oven outside her home in the Guaraní community of Yariguarenda, on the outskirts of the city of Tartagal, in northern Argentina. Currently, this community is facing a lawsuit filed by a private individual who claims part of the land they occupy. Credit: Daniel Gutman/IPS

The station currently has three directors who come from different native communities: Lidia Maraz (Toba), Nancy López (Wichí) and Felisa Mendoza (Guaraní). It is not a commercial enterprise and is supported by funds from cooperation programmes and, sometimes, by donations from listeners.

For the indigenous people who produce the programmes, it is sometimes an enormous effort to reach the station because of the cost of public transportation, which is twice as expensive as in Buenos Aires, 1,746 kilometers southeast of Tartagal.

The station emerged from meetings of indigenous women in the late 1990s at the home of Leda Kantor, an anthropologist who came from Buenos Aires to work on government programmes to support family farming.

“It was an activity to recover the collective memory. We thought about recording or documenting on paper whatever came up, but we realised that it was a very motivated group and that there was no media outlet reflected these things,” she told IPS.

As Kantor was a professor of anthropology in the Social Communications department at the Tartagal campus of the National University of Salta, after some time they moved their meetings there and different instructors became involved in the project.

“We actually started getting together in college because my house was too small. And we started holding workshops and trainings on basic issues of popular communication,” Kantor said.

In 2000, indigenous women began to produce a programme on the Nacional Tartagal radio station, the local affiliate of the Argentine state radio station. But it was in 2006 that they were able, thanks to state-funded programmes, to buy land, build a building and launch La Voz Indígena, which has been on the air ever since.

“Indigenous women are strong. They are the ones who bring home water or firewood. And traditionally, men who got married went to live in their wives’ communities. The evictions from their territories have left women at the mercy of men to some extent,” Kantor said.

Today, says the anthropologist, “the radio station continues to be a space of resistance to cultural subjugation, in a city where indigenous people never had a space to make their voices heard.”