Acts of Terror Will Not Undermine Our Resolve 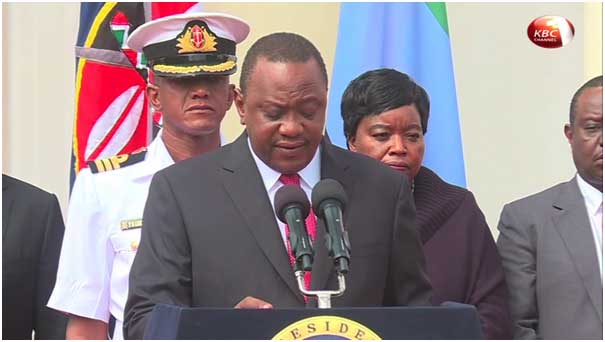 President Kenyatta addresses the Nation on 16 Jan 2019. “I also commend the civilians who looked after one another. For every act of evil that led to injury yesterday, there were a dozen acts of compassion, overflowing patriotism and individual courage,” Credit: KBC

Kenya is in mourning following a senseless act on innocent and defenseless civilians by individuals preoccupied with contemptible and misplaced ideology; who hope to intimidate others through violent acts of terror. Like in their other past attempts, they have failed, and Kenya remains unbowed.

As President Kenyatta has noted in his address; “We will allow no one to derail or frustrate our progress….We have prevailed and shall always prevail over evil. Let us now go to work without fear and continue with our work of building our nation.”

As the intelligence and security apparatus continue with investigations, our message to Kenyans remains that, we cannot give in to fear or the temptation to define the attack as a war between races or religions. That has always been the narrative that the perpetrators of terror would wish to spread.

Fortunately, they have always been on the losing side of history. The attack on 14 Riverside Drive should not deter Kenya’s resolve, but should further strengthen the country’s determination to overcome adversity and challenges that threaten its social fabric.

We applaud the work of Kenya’s security emergency rescue services and first responders, who mobilised in remarkable timeliness, demonstrated exceptional professionalism and heroism, thereby keeping the number of fatalities to a minimum. We also commend Kenyans for their heroic acts and solidarity for one another during this time.

The United Nations Secretary-General Antonio Guterres, in his message “has strongly condemned the terrorist attack in Nairobi and extends his condolences to the families of the victims and wishes those injured a swift recovery. The Secretary-General expresses his solidarity with the people and Government of Kenya(GoK)”.

Terrorism remains a global threat and presents a challenging test for intelligence and law enforcement agencies worldwide. No country is immune. Kenya has done remarkably well in preventing numerous other attacks.

The reality is that a multitude of stresses impact vulnerable populations around the world, leaving many disproportionately susceptible to extremist ideologies — driven by factors such as surging youth unemployment — which terror groups take advantage as a considerable reservoir for recruits. There is a need for concerted efforts to weaken the terror groups’ narrative and win the battle of ideas.

The UN remains steadfast in its support to Kenya’s development agenda, including commendable initiatives by the government based on a long view of the prevention of violent extremism in line with the UN Development Assistance Framework.

Together we can pursue smart, sustainable strategies that augment security with what the UNDP Administrator Achim Steiner describes as the triple nexus, “Achieving the 2030 Agenda and ensuring no one is left behind requires a pro-active, evidence-based and holistic approach to risk, resilience and prevention across humanitarian, development and peace effort.” This approach will be a long-term antidote to terrorism and the key to preventing violent extremism.

Already our partnership is underway with several local initiatives that are bearing fruit. Previously characterized by belligerence based on competition for resources, the border regions of Eastern Africa are slowly changing the narrative, replacing aggression with dialogue and socio-economic transformation.

A stand-out initiative is the Kenya-Ethiopia Cross Border Programme, launched in December 2015 by President Uhuru Kenyatta of Kenya and the former Prime Minister Hailemariam Desalegn of Ethiopia. This initiative is supported by IGAD, the European Union and Japan and implemented by the United Nations family in Kenya and Ethiopia together with local authorities on both sides.

Such initiatives represent determination and hope. They are a declaration that the soul of those on the right side of humanity can never be destroyed or prevented from living freely by terrorists.