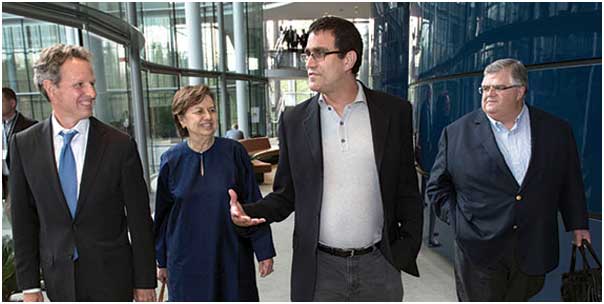 Each time he started a new government job, Timothy Geithner hoped to find a letter from his predecessor, explaining what to do and whom to call if things fell apart. The desk drawer was always empty.

“Financial crises are probably the most devastating economic events that can happen to a country,” says Geithner, who fought the last conflagration as president of the Federal Reserve Bank of New York and later US Treasury secretary. “I’d like our successors to have a better base of knowledge.”

So every summer, Geithner takes time off from his job as president of Warburg Pincus, a private equity firm, to help teach a two-week crisis management workshop for regulators from around the world.

It’s one part of the Yale Program on Financial Stability, which also offers a master’s degree and is undertaking an ambitious project to create, on a very large scale, what Geithner never found in that desk drawer—a manual for crisis managers.

“A lot of times we’ve made the same mistakes in fighting financial crises over time simply because there was no body of knowledge that people had jointly studied and debated,” says Andrew Metrick, a professor of finance at Yale who founded and runs the program. “It’s almost like you show up at the emergency room and the doctor says, ‘It looks like a broken arm. I think I’ve seen someone once do something for a broken arm.’”

Metrick was one of those emergency room financial doctors. Six months after the collapse of Lehman Brothers in September 2008, he got a call from the Obama administration.

They desperately needed a financial economist. So Metrick moved to Washington to work for the Council of Economic Advisers. There, as chief staff economist, he helped develop programs to revive housing and financial markets.

When it came time to propose legislation, he discovered that academic research wasn’t very useful.

“There was no real great connection between academic knowledge, economic intuition, and what we actually could put in the law because there just wasn’t a good body of research there,” Metrick says. “I was determined that when I came back to the academy I would try to be part of something that would help to fill that gap.”

That was the genesis of the Yale Program on Financial Stability, which got off the ground in 2014 with donations from organizations including the Alfred P. Sloan Foundation.

Geithner brought a practical focus to what became known as the New Bagehot Crisis-Response Project, named for Walter Bagehot, a 19th century British economist and author of Lombard Street: A Description of the Money Market, a bible of sorts for the guardians of financial stability.

The project’s 14 researchers compile case studies of responses to the global financial crisis and the euro crisis that followed it. Eventually, they plan to study manias and panics going back to the South Sea Bubble in the 18th century.

While the global crisis spawned countless books, articles, and memoirs, the Bagehot project seeks to analyze it in a systematic way—and determine what kinds of government actions worked, what kinds didn’t, and why. The architects of crisis-fighting programs in various countries are consultants on the project.

“Our focus is really on the technical details of the interventions,” Metrick says.

Their plan is to create an online tool that crisis managers can turn to in real time, in case they need to recapitalize a bank, say, or set up an emergency liquidity facility. They will also learn what to avoid, like Ireland’s decision to guarantee the liabilities of its banks, which transformed a bank run into a far more serious sovereign debt crisis.

“Because the classic panic happens pretty rarely in the same country, even though it happens around the world with pretty appalling frequency, there’s not actually that much institutional memory, and there certainly wasn’t at the Treasury or the Fed, about how you deal with a systemic financial crisis,” Geithner says in an interview.

The summer symposium—Geithner called it a “war college”—was a two-week workshop for central bankers and regulators. The central banks of China, Europe, Japan, and the United States all sent participants, along with agencies like the Bank for International Settlements and the European Stability Mechanism.

Another piece of the Yale program is the two-day Financial Crisis Forum, where veterans including former Treasury Secretary Henry Paulson offer their insights on subjects from capital injections to frozen money markets.

“For the current generation of officials, especially the younger ones who attend the conference, learning from history is vital,” says Paul Tucker, deputy governor of the Bank of England from 2009 to 2013. “Going forward, current officials also need to learn from the crises that, believe it or not, were averted or successfully contained.”

Finally, there is Yale’s one-year master’s degree in systemic risk, which offers early career professionals a chance to hone their skills and develop new ones. A recent graduate is Özgü Özen Çavuşoğlu, who returned to her job in the financial stability division of Turkey’s central bank and is now researching an early-warning system for the country’s economy.

Just as important, she says, was the opportunity to forge bonds with colleagues from across the globe.

“We are living in an interconnected world,” Özen Çavuşoğlu says. “That’s why the network of people with the same understanding will play an important role in having a stable global economy.”

The link to the original article: https://www.imf.org/external/pubs/ft/fandd/2018/12/tim-geithner-yale-program-financial-stability-wellisz.htm?utm_medium=email&utm_source=govdelivery