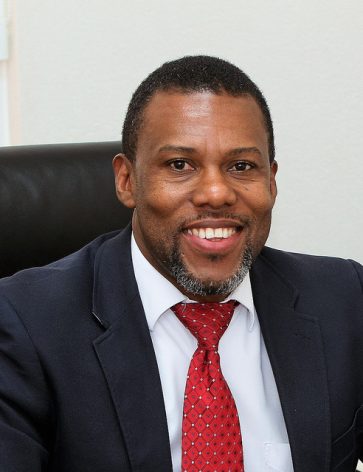 Ronald Jackson, Executive Director of the Caribbean Disaster Emergency Management Agency (CDEMA), told IPS in an interview that the ambitions around establishing strong early warning systems in the Caribbean date back to the early 2000s. Credit: Desmond Brown/IPS

Most countries located in the hurricane belt face being impacted during the yearly Atlantic Hurricane Season. But all Caribbean countries face another challenge—climate change

Ronald Jackson, Executive Director of the Caribbean Disaster Emergency Management Agency (CDEMA), told IPS in an interview that the ambitions around establishing strong early warning systems in the Caribbean date back to the early 2000s.

But he said, “it still remains incipient, despite the fact that there has been some level of investment in the area over time.”

“I think Jamaica would have been the farthest advanced way back in the 90s with the Rio Cobre warning system which included a community warning infrastructure as well as telemetre gauges linked to the met offices and to the National Disaster Management Office,” he said

Jackson believes countries “have gotten more caught up . . . in the opportunities of climate change . . . and less so with advancing what is considered to be adaptation.”

The CDEMA head said his unit has been working with its partners to look at framing a common vision, recognising the need for a more comprehensive investment in establishing people-centred early warning systems at national level.

“We have so far delivered a solutions package for four of our members—Antigua & Barbuda, Dominican Republic, Saint Lucia and St. Vincent and the Grenadines—looking at their gaps and using that to define the priority areas for investment to establish these early warning systems.”

Inter Press Service (IPS): What is the state of early warning systems in the Caribbean?

Ronald Jackson (RJ): We are trying to implement interventions around an integrated early warning systems agenda in all our 18 states by 2024, which is the sort of end cycle of this particular strategy. We’ve broken that up into bite size amounts from the point of view of how we are going to try to attract investments at a specific juncture over the life of that strategy, but by 2024 certainly to address the needs of the 18 [Caribbean Community] CARICOM member states as it relates to integrated people-centred early warning systems.

In Guyana for example, they don’t have hurricanes, but they do have flood issues which would require them looking at a flood warning system that is linked to tropical cyclonic events. A country not faced with challenges related to significant flood events may also want to look at their tsunami warning systems. So, we are targeting having a full system in each of our states by 2024.

IPS: What, if anything, would you like to see countries do differently?

The opportunities are in the area of renewable energy and how best we can capitalise on that and I think it is a necessary process that we must embark on and embark on fully because of the benefits to be derived.

You can reduce the cost of energy, allowing you to release additional resources into areas of resilience building—one of which is early warning. But the area which is categorised as adaptation in climate change, which is where you will see people use the language more around risk reduction and prevention, is an area that has not gotten the same level of focus as the climate mitigation aspect which is where you look at clean energy, reductions of emissions and so on. That for us is where the greatest threat is. The human security element of climate change is where we should be focusing heavily because we’re talking about people being displaced. You’re talking about floods, you’re talking about the loss of livelihoods. That’s where the greatest threat for Caribbean Small Island Developing States (SIDS), and in fact any developing island nation, lies. They have to face the challenge of having limited land masses and resources and having that constantly being impacted by the changing climatic conditions—sea level rise, saline intrusion, water scarcity, flood conditions and other environmental and health related issues—all aligned to climate change.

IPS: Given the challenges Caribbean countries have been facing, could it be that there still exist some misconception regarding adaptation?

RJ: As it relates to adaptation, we seem to think a lot of the interventions required are new. They are not new, we’ve been grappling with those things that are packaged under the theme of adaptation for some time. These are largely programme areas at national level which if you look at the analysis they have never, in my mind, in the last 20 years or decade or so received very strong budget allocations. That’s what the analysis is showing us. There could be a lot of questions or reasoning around that. It could be how countries determine what are the main priorities of the day given the limited resources and the fiscally strangling environment in which they are operating.

IPS: Which takes us to the issue of funding. As is the case with almost everything else, procuring funds is an issue. What has been the experience of countries getting funds for sustaining Multi-Hazard Early Warning Systems?

RJ: There is programme support from international sources. The challenge there is that it’s been ad-hoc—either financing one element or two elements of the four elements of people-centred early warning. Part of it is also sustainability because there are different elements that exist. The problem also is, can you maintain the infrastructure? Can you replace the parts in a timely manner? So, there is also a sort of maintenance issue that is linked to budget allocation.