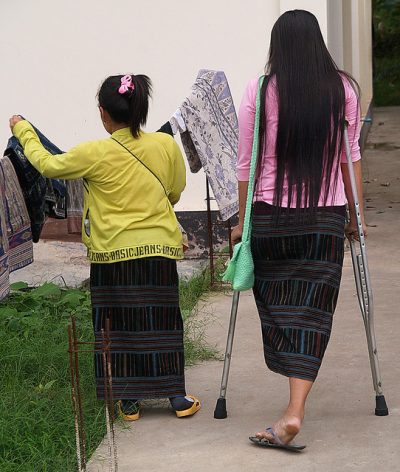 Approximately 15 percent of the world’s population, or an estimated 1 billion people, live with disabilities. But neglect, discrimination, and abuse are still all too common among disabled youth, leaving them deprived of rights including those to education, health, and employment. Credit : Melody Kemp/IPS

UNITED NATIONS, Mar 29 2019 (IPS) - People with disabilities are being left behind, and steps must be taken to ensure their inclusion in the world of education and work.

Approximately 15 percent of the world’s population, or an estimated one billion people, live with disabilities. But neglect, discrimination, and abuse are still all too common among disabled youth, leaving them deprived of rights including those to education, health, and employment.

“Children with disabilities must have a say in all matters that affect the course of their lives…They must be empowered to reach their full potential and enjoy their full human rights – and this requires us to change both attitudes and environmental factors,” United Nations High Commissioner for Human Rights Michelle Bachelet recently said.

UN Special Rapporteur on the rights of persons with disabilities Catalina Devandas Aguilar echoed similar sentiments upon the launch of her annual report, stating: “Deprivation of liberty on the basis of disability is a human rights violation on a massive global scale. It is not a ‘necessary evil’, but a consequence of the failure of States to ensure their obligations towards people with disabilities.”

Aguilar noted that a key factor preventing the inclusion of disabled youth is the ongoing discrimination against and segregation into special schools and institutions.

According to the UN Educational, Scientific, and Cultural Organisation (UNESCO), 90 percent of children with disabilities in developing countries do not attend school.

More than 10 percent of persons with disabilities have been refused entry into school because of their disability, and more than quarter reported schools were not accessible or were hindering to them.

In fact, unemployment among persons with disabilities is as high as 80 percent in some countries, according to the International Labour Organisation (ILO). Women with disabilities are two times less likely to be employed.

Those who are employed tend to earn lower wages than their counterparts without disabilities.

“This is a legacy of a model which has caused exclusion and marginalisation…we can no longer have children being hidden away and isolated, children with disabilities must have the opportunity to dream of a full and happy life,” Aguilar said.

In Bangladesh, the Bridge Foundation hopes to bridge these gaps and help create opportunities.

Inspired by the movie ‘Forrest Gump’ and the autobiographies of Helen Keller and Stephen Hawking, Natasha Israt Kabir wanted to support and empower people with disabilities, or the “differently abled.”

“I believe there should not be norm in the way things are done, but there should always be opportunities to do things differently… achieving sustainable development won’t become a reality without the social inclusion and empowerment people living with disabilities,” Kabir said.

Kabir, along with co-founder Swarna Moye Sarker, implemented a programme teaching information technology (IT) and arts, providing people with disabilities with the skills to work. They also established an online platform helping students showcase their skills and talent in order to sell their products and even gain employment.

“I believe technology will give them a voice, help them connect with the world and become independent,” Kabir said.

“Children with disabilities need special care and special management for their education and to merge them with the mainstream education system, social and youth led organisations like Bridge Foundation are playing a pivotal role,” Executive Director of the Center for Research and Information (CRI) Sabbir Bin Shams told IPS.

“Increasing and improving youth led initiatives for vulnerable women and children with disabilities may turn the experiences of economic growth a more equitable and inclusive one,” he added.

In a UN newsletter, Kabir recounted some of the programme participants including Falguny, a physically-challenged student without wrists who was able to quickly develop fast computer operating skills.

“These people are the source of my strength and inspiration now. I strongly believe—if you have the idea and vision to change the world, yes! You can,” Kabir said.

The Bridge Foundation received the Joy Bangla Youth Award in 2018 for its work in empowering people with disabilities.