Shiwani Neupane is a writer for PassBlue*, which provides in-depth coverage of the UN and women’s issues. 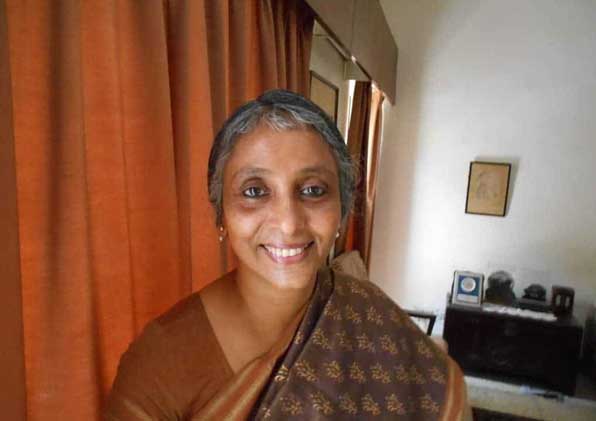 Pamela Phillipose, who edited the Women’s Feature Service in New Delhi for almost six years. She stepped down in 2014.

NEW DELHI, Mar 5 2019 (IPS) - Pamela Phillipose was editor of the Women’s Feature Service, the only syndicated news service in India with a gender perspective, for nearly six years, until she stepped down this year as editor in chief and director. She wore other hats for the publication as well, writing and photographing.

The service began operating in India when Anita Anand, the manager, moved its headquarters to New Delhi in 1991 to ensure that its focus stay on the developing world and that it become autonomous.

The service had gotten its start in 1978 as a UNESCO initiative in reporting on development issues and written by women journalists, based with the Inter Press Service (IPS) global news agency in Rome. www.ipsnews.net

Once it moved to India, it opened several bureaus around the world, publishing articles by Indian journalists and others for syndication about women’s issues on social, economic, political and health developments, but the bureaus eventually shut down because they could not raise enough money to keep going.

The service (www.wfsnews.org) now syndicates 250 to 300 articles a year and offers programs like international conferences on women-related topics to be self-sustaining. (Anand left in 2000.)

Phillipose started her journalism career in Bombay (now Mumbai) with The Times of India in the 1970s and later was associate editor for The Indian Express. She was awarded the Chameli Devi Jain prize for outstanding woman journalist in 1999 and the Zee-Astitva Award for Constructive Journalism in 2007.

She was an editor of a book, “Across the Crossfire: Women and Conflict in India” and has contributed to various anthologies, including “Memoirs From the Women’s Movement in India: Making a Difference.”

This interview, which touches on Phillipose’s career as a journalist and advocate as well as the increasingly precarious state of many women in India, was held last year by email and by Skype from New York to Phillipose in Delhi.

Q. Why did you leave mainstream media to join the Women’s Feature Service in 2008?

A. The Indian media had increasingly moved away from issues concerning a large section of population, which did not have a presence in the market, after the country began to liberalize its economy — a process that began in the mid-1980s but which peaked in the early ’90s. Dictated by the market, and the advertising sector in particular, the mainstream media began to shift their focus to consumers during the liberalization years.

This meant that many important tropes fell off the media map, including that of gender. This was one of the major reasons for me to consider making the move from The Indian Express, where I was in charge of the editorial pages, to the Women’s Feature Service, a features agency mandated to highlight gender concerns.

Q. You moved from The Times of India to The Indian Express and then to Women’s Feature Service, or WFS. How has the life of Indian women changed during your career?

A. I began my career in the mid-1970s with The Times of India in Bombay. In those days, newspapers were driven largely by politics. The Mathura rape case of the late 1970s and the mobilizations around it helped to make visible the larger theme of violence against women.

This, in turn, impacted positively on media coverage of women’s concerns, and the trend continued into the 1980s, which saw many legislative changes taking place.

After the economic restructuring of the 1990s, there was an unprecedented burgeoning of media presence and institutions — first within the print, then within television and over the last decade or so within the ICT [information and communications technology] and social media space.

All of this has impacted both the representation of women in the media and their presence within the media. In the 1990s, for instance, because women were the prime audiences for television, television serials attempted to consciously link women with the models of hyperconsumption and a neo-conservatism being promoted on television.

However, through it all, larger issues like societal biases — reflected in skewed sex ratios — and sexual violence, remained deeply entrenched within society.

The extent to which such violence, for instance, existed at the subterranean level was evident in the regular recurrence of violence, as evidenced in the murder and rape of Thangjam Manorama in Manipur [2004] or in the Delhi gang rape [2012].

So, while many positive changes, vis-à-vis women, did take place, including universal primary education, rising legal literacy and reservations for women at the level of local government, women in India continue to face serious challenges, including those determined by their caste and religious backgrounds.

Q. India has received a lot of news coverage in at least the last year for the occurrence of multiple gang rapes in the country. This has led to multifaceted conversations worldwide about the state of women in India. Have these conversations helped shed light on women’s rights and concerns, a mission of the Women’s Feature Service, or have the rapes complicated the situation for women further?

A. These are complex issues that require comprehensive answers. Quickly, though, I would like to point out that the Justice Verma Committee Report was a positive outcome of the mobilizations around the Delhi gang rape of December 2012 because it put on the table many issues like marital rape and assaults on women in conflict situations.

Those mobilizations also saw the enactment of the Criminal Law (Amendment) Act 2013, which mandated the compulsory filing of First Information Reports in police stations, something that was neglected earlier, and the criminalization of various kinds of attacks on women, including stalking, acid attacks and stripping.

Q. How do you balance your advocacy work on women’s rights in India with journalism?

A. I believe an important part of journalism is advocacy. In a country like India, where the well-being of an increasing number of people is being threatened, directly and indirectly, by reversals of all kinds, ranging from the food and environmental crises to global recessions, there is space for a more people-centric definition of journalism.

We need more than ever media practitioners who travel beyond the confines of privileged enclaves, leaving behind the “big spenders” of metropolitan India, to tell their stories. We need media practitioners who have the knowledge, capacity and technological ability to communicate on the real issues of our times and speak truth to power in compelling ways.

It is important for journalists to use their abilities of description, their sense of empathy, their access to information and their understanding of the power of words, to tell their stories.

Q. What advice would you give to the prime minister of India, Narendra Modi, about effective legislation to protect women’s rights? Do you think, for example, that a separate coach for women in a train is necessary?

A. It is imperative that the Modi government ensures that the rising tide of intolerance and communalism in the country is addressed urgently. Communalism and communal violence adversely affects women disproportionately, as we saw in the Gujarat riots of 2002.

One piece of legislation — the Women’s Reservation Bill, providing for a 33 percent quota for women in Parliament and the state legislatures — has been pending since 1996 because of opposition from male Parliamentarians.

The Modi government would do well to pass that law urgently. We also need other laws presently considered too radical for Indian society — like a matrimonial law and a law to outlaw marital rape.

A. Women and children, as we know, are the worst affected when conflict-driven violence breaks out, since the responsibility of keeping families going falls on them. However, they hardly matter in peace negotiations and their concerns are not adequately reflected in the drawing up of the architecture of the post-conflict scenario.

Another major concern is that they are extremely vulnerable to sexual attack and assault in times of conflict. This is why I would also advocate the striking down of a repressive law like the Armed Forces Special Powers Act, presently in the statute books, which gives the military sweeping powers to treat citizens in disturbed areas with complete impunity.

* Founded in 2011, PassBlue is a project of the New School’s Graduate Program in International Affairs in New York and not tied financially or otherwise to the UN. PassBlue is a member of the Institute for Nonprofit News.