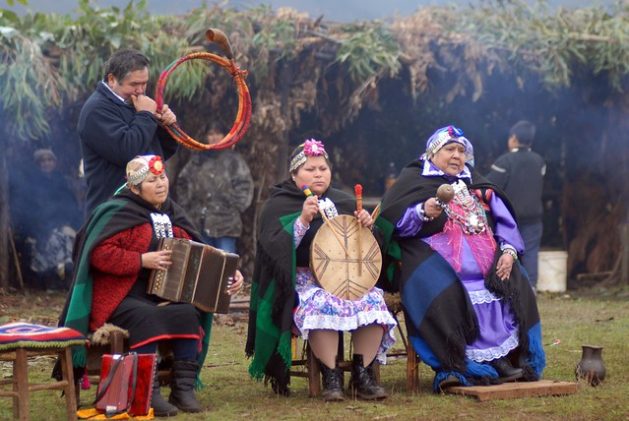 The Mapuche, a group of indigenous inhabitants of south-central Chile and southwestern Argentina, celebrate their New Year. Indigenous and local communities are on the frontline to protect the land - a vital ecosystem. Credit: Fernando Fiedler/IPS

Forests have long been underestimated—they sustain biodiversity, regulate the world’s water and weather cycles, and even provide the air we breathe.

In fact, one third of the climate solution lies within the land-use sector, which includes the protection of forests, United Nations Convention to Combat Desertification (UNCCD) has found.

And it is indigenous and local communities who are on the frontline in protecting this increasingly vital ecosystem.

“Thanks to us the forests are there, thanks to our blood and our fight we still have the Amazon. If we just depended on the economic model, the Amazon would be devastated,” said indigenous Kichwa leader Patricia Gualinga during the UN Permanent Forum for Indigenous Issues (UNPFII).

“Many people think that the problem of indigenous peoples are an isolated one. No—the Amazon is vital for humanity…our struggle is a global problem…destroy the Amazon and the world will be destroyed,” she added.

However, indigenous environmental defenders are facing growing threats as they are pushed off their own lands or are even killed simply for protecting forests.

“Criminalisation and violence against indigenous peoples and human rights defenders is a global crisis…[they] are intended to silence indigenous peoples’ protest,” said Special Rapporteur on the Rights of Indigenous Peoples Victoria Tauli-Corpuz.

According to international NGO Global Witness, 207 land defenders were killed in 2017. Most of these deaths took place in just four countries: Brazil, Colombia, Mexico, and the Philippines.

“At the root of this violence is systematic racism and the failure of governments to recognise and respect indigenous land rights,” Tauli-Corpuz said.

The Special Rapporteur found that a majority of those killed were defending their lands against extractive private sector projects.

In August 2018, the body of Jorginho Guajajara, the leader of the Guajajara people, was found in the Brazilian Amazon’s Maranhao state. Due to his work in protecting the forests, many suspect illegal loggers as the perpetrators.

“Our territories hold the resources that are so envied by the oil and mining concerns on which the global economic model is based. And in terms of human rights, economy wins out. Because our rights as indigenous peoples are not being respected and they never have been,” Gualinga said.

Such activities are often enabled by governments, and now the rise of populist governments threaten to reverse the little progress that has been achieved.

In Brazil, President Jair Bolsonaro has long attacked indigenous rights and lands, saying that it is a “shame” that the Brazilian army did not exterminate indigenous communities like the United States of America and that indigenous-designated territories are an “obstacle” to agri-business.

Just hours after taking office earlier this year, Bolsonaro transferred the regulation and creation of new indigenous reserves to the agriculture ministry and has since proposed to open up the Amazon and other indigenous territories to commercial farming and mining.

“Our fundamental rights is being destroyed by a…fundamentalist who adopted a hate discourse against indigenous people and denies people their territory rights. When they deny that, they are denying their original peoples,” said indigenous activist and national coordinator of Brazil’s Indigenous People Articulation (APIB) Sonia Guajajara.

Guajajara has joined over 4,000 others in Brasilia for the ‘Free Land’ protest which is expected to be the largest indigenous protest in the South American nation.

“We are not going to go back, we are going to resist. It’s five centuries that we’re still here…we need to help the earth, we are responsible, we have to give hands and go together and say that the fight for mother earth is the mother of all fights,” Guajajara said during a UNPFII event.

In The Name of Conservation

Though a number of countries have recognised the importance of forest and land protection, some conservation policies have resulted in the exclusion and displacement of indigenous communities.

In Kenya, there has been an escalation of violence as the Forest Service has repeatedly evicted and burnt Sengwer homes in the Embobut forest and has even shot several community members.

Tauli-Corpuz found that the Kenya Forest Service is among the recipients of the European Commission-funded climate change project in the area. 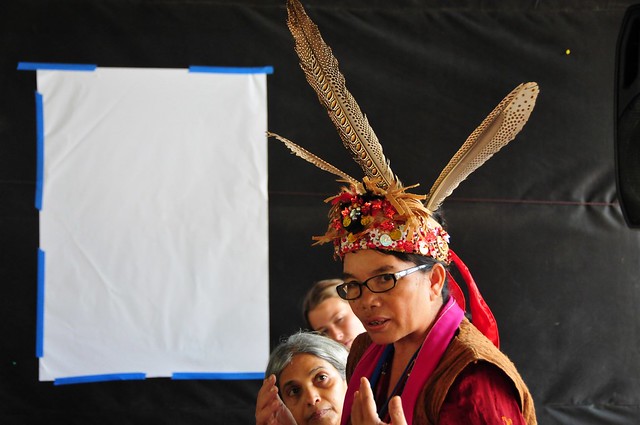 Maridiana Deren, an environmental activist based in Kalimantan, Indonesia, was speaking in 2015 about how palm oil companies were destroying indigenous peoples’ ancient way of life. Indigenous environmental defenders are facing growing threats as they are pushed off their own lands or are even killed simply for protecting forests. Credit: Amantha Perera/IPS

While Indonesia has worked to drastically reduce deforestation, its conservation policies have also been detrimental to the livelihoods and well-being of indigenous communities.

In 1992, the Indonesian Foreign Ministry designated the Mount Salak-Halimun forests into a national park.

Prior to that, the area was indigenous Kasepuhan community land which was used to gather food and other subsistence needs but the group now face harassment and intimidation from the park rangers and struggle to survive.

Despite its protected status, the forests still sees illegal logging and deforestation.

“The problem we are facing is because of the conflicting laws and also the conservation so far that has been very much dominated by non-indigenous paradigm that has also become the paradigm of the government,” said Secretary-General of Aliansi Masyarakat Adat Nusantara (AMAN), or the Indigenous Peoples Alliance of the Archipelago, Rukka Sombolinggi. She noted that indigenous communities have already long been protecting their environment.

And it is no coincidence.

Forest Trends found in 2004 that such communities invested between two to four billion dollars per year on resource management and conservation, equal to one-quarter of the amount spent by the conservation community on all public protected areas worldwide.

Forests managed by indigenous peoples are also found to have lower rates of deforestation and more climate benefits.

Providing land rights and titles can thus help in the fight to protect the world’s forests and lands from further degradation.

While indigenous communities customarily own more than 50 percent of the world’s lands, only 10 percent is legally recognised.

Launched by the Rights and Resources Initiative (RRI), the International Land and Forest Tenure Facility is the first and only multi-stakeholder financial mechanism focused on securing land and forest rights for indigenous peoples and local communities.

It provides grants to indigenous organisations to help scale up implementation of land and forest tenure reform policies as well as to map and register their lands.

For instance, the facility helped AMAN title over 1.5 million hectares of land belonging to 200 indigenous communities and achieved recognition of 230,000 hectares in Indonesia in just 24 months.

The Forest Watcher mobile application, created by the Global Forest Watch, helps monitor, act on, and prevent deforestation and illegal wildlife activities, which often take place away from the public eye.

However, the app gives information in real time to those on the frontline, including rangers and indigenous forest communities.

But first and foremost, the international community must respect indigenous rights, including by working to protect land defenders and end impunity.

“I have hope that we will be able to stop this criminalisation and to ensure that indigenous people will continue to play their role in protecting the forests not just for themselves, but for the rest of the world,” Tauli-Corpuz said.