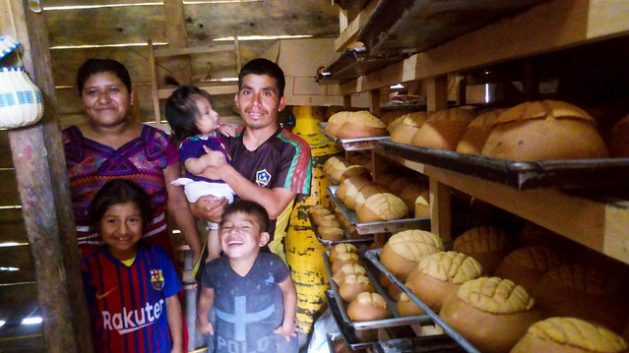 Diego Matom, a member of the Ixil indigenous community, poses happily with his family, surrounded by fresh loaves of bread which were baked thanks to community electricity generation, which has given his business a big boost, in the 31 de Mayo village in the mountainous ecoregion of Zona Reina, in northwestern Guatemala. Credit: Edgardo Ayala/IPS

USPANTÁN, Guatemala, Apr 23 2019 (IPS) - In the stifling heat, Diego Matom takes the bread trays out of the oven and carefully places them on wooden shelves, happy that his business has prospered since his village in northwest Guatemala began to generate its own electricity.

And it managed to do so against all odds, facing down big business and the local authorities.

“The bakery used to operate with a gas oven, but the cost was very high because baking took a long time; now everything is faster and cheaper,” Matom told IPS, surrounded by his freshly baked loaves of bread.

Matom, a 29-year-old Ixil Indian, lives in the village of 31 de Mayo, located in the ecoregion of Zona Reina, Uspantán municipality, in the northwestern department of Quiché, Guatemala.

The village, some 300 kilometers north of the capital, was the first of four in the area to build its own hydroelectric plant, driven by necessity, since the state does not bring basic public services to this remote region.

There is no piped water, and medical and educational services are scarce, as is the case in many rural areas of this Central American nation of 17.3 million inhabitants.

In the communities of Zona Reina, water for human consumption comes from the springs perched in the mountains surrounding the villages, which is stored in tanks from which it is piped.

The 31 de Mayo power plant, called Light of the Heroes and Martyrs of the Resistance, consists of a turbine that generates 75 kW and is powered by the waters of the Putul River, channeled by a two-kilometer concrete channel into a 40-cubic-meter tank.

From there, the water runs down with enough pressure to move the turbine in the engine room.

The name of the village recalls the date on which some 400 Ixil and Quiché indigenous families were resettled there by the government in 1998, after the end of the 1960-1996 civil war.

These families were part of the so-called Communities of Population in Resistance, which during the conflict had to flee to the mountains due to repression by the army, which considered them supporters of the left-wing guerrilla.

Once resettled, each family received a small plot of land, where they plant corn and cardamom (Elettaria cardamomum), of which Guatemala is the world’s largest producer and one of the top exporters.

Following the example of 31 de Mayo, three other communities in Zona Reina struggled to become self-sufficient in electricity: El Lirio in May 2015, La Taña in September 2016 and La Gloria in November 2017. 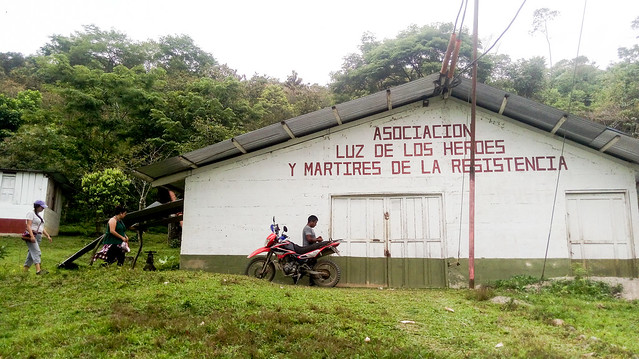 The machine house for the mini-hydropower dam in the 31 de Mayo village, which provides energy to some 500 families and has served as a model for self-generation from community dams to extend throughout the Zona Reina ecoregion in the municipality of Uspantán in northwestern Guatemala. Credit: Edgardo Ayala/IPS

Unlike large-scale dams, which typically use 100 percent of river flow, community dams use only 10 percent, maintaining normal flow and preventing communities from running out of water downstream.

The four mini-hydroelectric plants supply the four villages where they are located and five neighbouring villages, benefiting a total of 1,000 families. But much remains to be done to promote access to energy throughout the Zona Reina, where there are a total of 86 villages.

But word is spreading and there is already another project approved for eight other villages, in the neighbouring ecoregion of Los Copones, that will share the energy generated with 11 neighbouring communities. The plan has received 1.25 million dollars in development aid financing from Germany.

The population in the Zona Reina is mainly indigenous, composed mainly of the Q’eqch’is, although they live alongside other Mayan peoples, such as the Ixil.

“Now that we have electricity we can do whatever we want, the kids come home from school and plug in their computers and do their homework,” said Zaida Gamarro, 31, a resident of La Taña.

Life used to be more difficult because at night the villagers used candles or lanterns for which they had to buy kerosene regularly, Gamarro told IPS during a tour of the villages that have community dams, located in a mountainous area where travel by road is difficult.

Several businesses such as the Matom bakery have also emerged, along with mechanics’ garages, carpentry workshops and several shops that can now use refrigerators.

“The business is going well, because we are located on the main street, and people are interested in our refrigerated products,” said José Ical, 38, a native of La Gloria and the owner of a small grocery store.

These efforts were made possible thanks to European development aid funds and local work by the environmental collective MadreSelva, in charge of designing and executing micro-hydroelectricity projects.

The families pay an average of 30 quetzals (about four dollars) per month for energy – less than what is paid by families in municipalities on the main power grid.

The idea for local inhabitants to produce their own energy clashed with the interests of international consortiums and ran into resistance from mayors allied with those groups, said those interviewed in the communities. 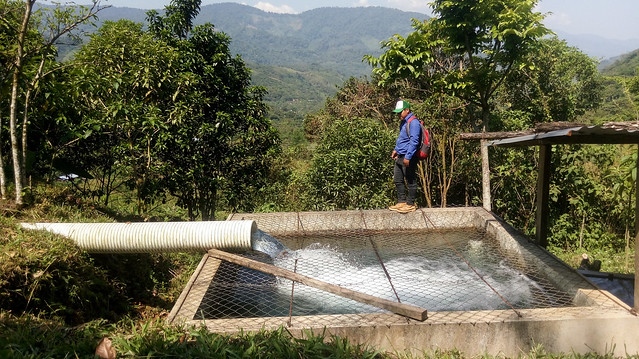 A man shows the 27-cubic-meter tank of the La Taña community hydropower system, one of four installed in this remote mountainous region populated mostly by indigenous people in the northwestern department of Quiché, Guatemala. Credit: Edgardo Ayala/IPS

Specifically, they accused the Italian transnational company Enel Green Power, which runs the Palo Viejo Hydroelectric Project in the area, of carrying out a smear campaign against community dams.

A community hydroelectric plant, they said, runs counter to the system by which the state grants concessions to companies, which become the sole providers of those services.

The company, they added, maneuvered to divide the 31 de Mayo community, convincing some 100 families to abandon the project and thus weaken it, through a South African Pentecostal evangelist, Gregorio Walton, who offered solar panels to those who left the community project.

“There is a great deal of manipulation on the part of Enel, it wants to make people believe that the community project can’t work, that only the company can provide good electricity,” said Regina Ramos, from the community of 31 de Mayo.

Enel Green Power representatives did not respond to IPS’ request for comment.

“We don’t want companies like Enel, they just come to destroy our rivers and leave the community nothing,” said Max Chaman Simac, president of the Amaluna Nuevo Amanecer Association of La Taña.

Enel’s Palo Viejo power plant began to operate in March 2012, with a capacity of 85 MW. The consortium now has five hydroelectric plants in Guatemala. In total, it has 640 plants in Europe and the Americas.

The inhabitants of these villages maintained that the consortium was able to enter the region thanks to the permit granted by the then mayor of Uspantán, Víctor Hugo Figueroa.

“He was part of a strategy of land grabbing, in favour of extractive projects,” one of MadreSelva’s members, José Cruz, told IPS.

Meanwhile, the MadreSelva collective has sought to develop agroecological projects that help conserve ecosystems, especially in watersheds, and at the same time generate incomes for families.

Taking advantage of the organisation originally set up for the energy projects, a group of women now produce eco-friendly shampoos and soaps made from plants, ash, salt and other ingredients.

The families thus save money on basic products, and some of the women have also started to market them.

“We are encouraging people to plant home gardens, including herbs like rosemary, chamomile, etc., as well as the usual vegetables,” Mercedes Monzón, an activist in charge of these projects on the part of Madre Selva, told IPS.

Another initiative in this direction is the production of natural broths, based on rosemary, basil, dill, parsley and other aromatic herbs, which reduces the purchase of these products, whose wrappers bring pollution to the area.