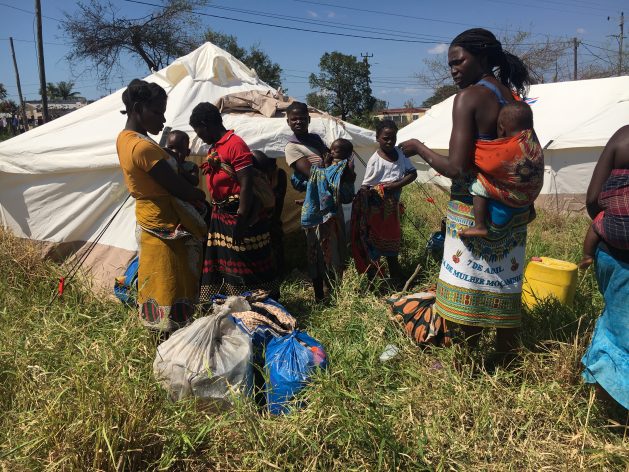 Cyclone Idai made landfall on Mar. 14 and 15, in Mozambique’s Sofala, Manica and Zambézia provinces. It was followed by Cyclone Kenneth on Apr. 25 which affected the northern province of Cabo Delgado. Recent data from the World Food Programme (WFP) indicates that more than 2.1 million of the country’s 31 million people were affected. This, coupled with the country’s economic downturn, could affect the elections planned for later this year. Credit: Andre Catuera/IPS

MAPUTO, May 20 2019 (IPS) - Mozambique, which was affected by an unprecedented two tropical cyclones over a matter of weeks, is still reeling from the impact a month after the latest disaster. But resultant devastation caused by the cyclones could impact the country’s elections as concerns are raised over whether the southern African nation can properly hold the ballot scheduled for later this year.

Currently, Mozambique does not have sufficient funds to go to the polls on Oct. 15, with the national electoral body only having 44 percent of the required 235 million dollars needed to hold the election.

Cyclone Idai made landfall on Mar. 14 and 15, in Mozambique’s Sofala, Manica and Zambézia provinces. It was followed by Cyclone Kenneth on Apr. 25 which affected the northern province of Cabo Delgado.

The cyclones have also made it difficult for the National Commission of Elections (CNE) to complete the process of voter registration. Apr. 15 to May 30 was set aside for this but in the regions affected by Cyclone Idai the census have not yet begun and in Cabo Delgado voter registration was interrupted.

The damage caused by the two cyclones is enormous. Recent data from the World Food Programme (WFP) indicates that more than 2.1 million of the country’s 31 million people were affected. Of these, at least 60,000 people in the country’s central and northern regions are still living in makeshift housing centres created by the government and aid partners. While 1,67 million people are still receiving food assistance, health care and water from the government and NGOs, according to WFP.

Official data points to the death of more than 1,000 people and schools, hospitals, roads, bridges and many public buildings were destroyed.

Many have lost everything, including their proof of identity, as researcher and social activist Jessemusse Cacinda explains to IPS: “Many people have lost their documents, and the possibility of being registered to vote is greatly reduced.”

Originally the CNE had aimed to register some 14 million voters this year, up 3 million from the country’s previous national elections. This year will be first time that Mozambicans will vote for provincial governors.

But CNE president Abdul Carimo has acknowledged that the electoral body is far from registering 14 million voters.

Though Mozambique’s Minister of Economy and Finance Adriano Maleiane said in an interview with STV (Mozambican private television channel) that the government and the CNE would find ways to make the elections possible.

“If the solution is reorientation of the expenses within the limit that has been fixed, we probably don’t have to go to make an international [appeal],” said Maleiane.

Economist Manuel Victorino recognises that the difficulties in spending money on the elections and on relief efforts. He tells IPS that the country’s public accounts should also not be ignored.

According to World Bank President David Malpass the money will be used to re-establish water supply, for disease prevention and reconstruction, among other things. It is also intended to ensure food security, provide social protection and provide early warning systems in the communities affected by the cyclones.

Rebuilding will not be easy.

Cyclones Idai and Kenneth made landfall amid an economic downturn that has affected the country since 2015 when the government’s programme partners decided to withdraw their support for the state budget, due to the discovery of hidden debts.

The World Bank stated before the cyclones that, “Mozambique continues to be in default of its Eurobond and the two previously undisclosed loans.”

In addition, the Mozambique Tributary Authority says that between 2016 and 2017, more than 2,900 companies closed their doors due to the economic crisis and unemployment has risen. According to the United Nations Educational, Scientific and Cultural Organization, the rate of unemployment in Mozambique is around 21 percent. But since the cyclones a number of private business have also closed.

Despite the sharp rise in debt, the Mozambican economy was expected to rise around 4 percent this year, against 3,3 percent of 2018, according to the International Monetary Fund. The country expects to generate 95 billion dollars of natural gas revenue over the next quarter of a century.

Until then, however, ordinary people are struggling.

“The situation of the country is bad. The cost of living is too high, and the purchasing power of the citizens is dropping a lot. And it has become worse due the cyclones Idai and Kenneth,” António Sabonete, a trader who sells clothes in Tete, central Mozambique, tells IPS.

Sabonete has three children and says he decided to become trader because he lost his job in 2016.

The Mozambique Liberation Front, known by it’s Portuguese acronym, FRELIMO, has dominated the polls since the first multi-party elections in 1994.

“From this high cost of living and the purchasing capacity of people has lowered. It can weaken and penalise FRELIMO [in the elections],” says Cacinda, underlining that, “the opposition parties will use all these elements linked to the crisis to build their own speech to try to convince the voters. And it’s obviously going to reduce the number of votes for FRELIMO.”

Cacinda adds that the economic crisis should create opportunities for Mozambican opposition parties to have a stronger showing in the upcoming polls, “Because for this year’s elections we feel that there is some balance.”

But FRELIMO recently publicly condemned corruption and accusations of such from within the party, appealing to justice authorities to continue investigating these cases.

But in addition to clamping down on corruption, Cabinda says that it is time for Mozambican politicians to prioritise the impact of climate change on the country.

“Mozambique and many of the Africans countries are not prepared to deal with climate change.”

“Our politicians must have a clear view of the kind of country they intend to govern and they want to leave for the future generations. Because locals development plans should be made that include issues of climate change as a priority approach,” Cabinda tells IPS.

In the meantime, others worry how they will start again from scratch.

Beira, the capital city Sofala province, was razed by Cyclone Idai. But people have started to return to the devastated city and are picking up the pieces of their lives.

Gervasio John is one of them.

In a telephonic interview with IPS, John says that he and his family returned to his home in Manga Mascarenha, a neighbourhood in Beira.

John is rebuilding his house. He is one of many who are doing so at their own cost as the government does not have the resources to directly support the reconstruction of homes.

“It’s not easy, but I need to do something to restart life after Idai, despite the fact that there is no money,” John says.

**Writing with Nalisha Adams in Johannesburg