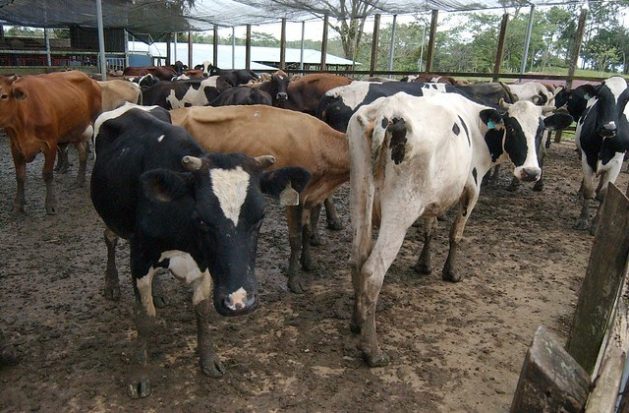 Among the major drivers of the Antimicrobial Resistance crisis is the misuse and overuse of antibiotics in livestock and feed. Credit: Germán Miranda/IPS.

UNITED NATIONS, May 21 2019 (IPS) - Antimicrobial resistance is quickly becoming a global crisis and risks reversing a century of progress in health. Some organisations have already geared up and are tackling the issue from its roots.

In a new report, the United Nations Interagency Coordination Group (IACG) on Antimicrobial Resistance estimates that antibiotic resistance could cause 10 million deaths each year by 2050.

Already, drug-resistant infections cause at least 700,000 deaths annually around the world.

“Antimicrobial resistance is one of the greatest threats we face as a global community,” said UN Deputy Secretary-General and Co-Chair of the IACG Amina Mohammed.

“[The report] rightly emphasises that there is no time to wait and I urge all stakeholders to act on its recommendations and work urgently to protect our people and planet and secure a sustainable future for all,” she added.

In 2017, the World Health Organization (WHO) reported that antibiotic resistance was a “global crisis that we cannot ignore” and that if ignored, “will take us back to a time where people feared common infections and risked their lives from minor surgery.”

According to the IACG report, approximately 35 percent of common human infections are already resistant to currently available medicines in some member countries of the Organization for Economic Cooperation and Development (OECD), while resistance rates are as high as 80 to 90 percent in some low- and middle-income countries (LMICs).

The economic impact of antimicrobial resistance would also be catastrophic as healthcare expenditures will rise and sustainable food and feed production will increasingly be at risk.

The World Bank estimates that up to 24 million people could be forced into extreme poverty particularly in low-income countries, and the economic damage could be comparable to the shocks experienced during the 2008-2009 global financial crisis.

“The world is already feeling the economic and health consequences as crucial medicines become ineffective. Without investment from countries in all income brackets, future generations will face the disastrous impacts of uncontrolled antimicrobial resistance,” WHO said.

Among the major drivers of the crisis is the misuse and overuse of antibiotics in livestock and feed.

Though WHO has recommended that the food industry stop using antibiotics to promote growth and prevent disease, nearly three-quarters of the total use of antibiotics worldwide is still used on animals, greatly impacting the health of consumers.

According to the Alliance to Save our Antibiotics, livestock raised for food in the United States are given five times more antibiotics as farm animals in the United Kingdom. In the case of cattle, the difference in dosage rates may be as high as 16 times the rate of dosage per cow in the UK.

As a result, Europe banned the import of American hormone-treated beef.

In Bangladesh, a study found a range of antibiotics in almost 50 percent of poultry feed samples across 14 brands from four districts. The Bangladesh Agricultural Research Council also noted that the levels of antibiotics were far above the levels acceptable to human health.

Among such antibiotics was Oxytetracycline, which is often used to treat chest infections such as bronchitis and pneumonia.

Another review found a high prevalence of antimicrobial resistance in Bangladesh, partially due to the misuse and overuse of antibiotics, including in the livestock sector.

As Bangladesh’s livestock sector is only expected to grow, with plans to export poultry in coming years, sustainable livestock management is necessary in managing growing antibiotic resistance regionally and globally.

One organisation hopes to do just that.

After graduating from Chittagong Veterinary and Animal Sciences University, Salma Sultana saw a shortage of trained veterinarians and farmers resorting to untrained doctors who are most often behind the widespread misuse of antibiotics and thus the frequent death of livestock and rise in antimicrobial resistance.

In 2015, she founded the Model Livestock Advancement Foundation (MLAF) near Dhaka whose vision includes “to have a livestock sector that is sustainable, commercial, and contributing to livelihood, employment, national income, and food security.”

This includes the training and provision of modern and evidence-based animal health services as well as the prevention of antimicrobial resistance.

MLAF is the only educational, research, and animal healthcare voluntary organisation in Bangladesh and has since produced 45 veterinary service providers and 500 livestock entrepreneurs while providing health support to over 5,000 livestock herders.

The organisation has been recognised for its work as it was most recently awarded with the International Arch of Europe Award for Quality and Technology in 2018 and the Joy Bangla Youth Award in 2017 for its contribution to youth training and development.

As the Lancet Planetary Health found that interventions that restrict antibiotic use in food-producing animals reduce antibiotic-resistant bacteria in such animals by up to 39 percent, the work of organisations like MLAF is therefore crucial in the fight to keep the planet and its populations healthy and safe.