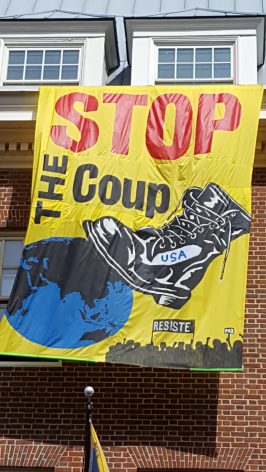 A group of activists calling themselves the Embassy Protection Collective protested against the U.S. and opposition party leader Juan Guide's representatives taking over the Venezuelan embassy. Credit: Backbone Campaign/ (CC BY 2.0)

UNITED NATIONS, Jun 10 2019 (IPS) - Venezuelans in the city of Washington D.C., in the United States, are currently without consular protection as access to their country’s embassy has remained unstable since April.

“I went to get my passport…and then of course April 2019 is when it expired. And that limits me because you know my parents are at an age that anything could happen,” Luis*, a 35-year-old Venezuelan living in the U.S., told IPS. He asked not to be identified by his real name as he still has family living in Caracas and is concerned for their safety.

While the situation regarding the embassy remains uncertain, Venezuela still has other consulates in the country, but IPS was unable to reach them.

Where do Venezuelans in need of assistance go to?

Luis’s inability to renew his passport through the embassy comes amid a continued power-struggle at the embassy. Protestors had occupied the Washington embassy two weeks prior to the revocation of visas for representatives in the embassy on Apr. 24 by the Trump Administration.

Venezuelan President Nicolás Maduro won re-election in May 2018, but the U.S. and other nations, including Canada, recognised the leader of the opposition party Juan Guaidó as president in January.

The U.S. revoked the visas of Maduro’s representatives at the embassy and helped establish Carlos Vecchio, a representative of Guaidó.

Medea Benjamin is co-founder of Code Pink, a NGO that describes itself on its website as “a women-led grassroots organisation working to end U.S. wars and militarism”, which participated in protesting, along with other activists, against the U.S. and Guadio’s representatives taking over the Venezuelan embassy in May. She told IPS: “It is such a critical international convention on diplomatic relations, one that has global implications.”

“If you’re a Venezuelan in need of assistance, where are you going to go? You need representation.”

Luis moved to the U.S. at 17 and eventually naturalised. He now has dual citizenship, but according to the U.S. Department of State – Consulate Affairs, if a person is a dual national, they must still have a valid Venezuelan passport in their possession to enter and leave Venezuela.

In the almost two decades that he has been in the U.S., Luis said he “never encountered any issues”, having at least three passports during that time.

But now, should Luis wish to travel to Venezuela he would have to travel out of state, or possibly to the Venezuelan embassy in Canada, to renew his passport. It’s a trip that he said is too expensive and time consuming.

There are some consulates still open in the U.S., including the one in New York. But Luis said he believed the New York consulate has already been taken over by representatives of the Venezuelan opposition.

“I do not recognise the opposition’s president. I wouldn’t go and get my paperwork with an institution that I don’t recognise,” he said.

Luis told IPS that he is part of the local Venezuelan community and has many Venezuelan friends, but that he thinks many of them are not as concerned as he is about the embassy.

“I’m a minority, because the largest amount of Venezuelan people are people from middle and upper class that have the means to travel,” Luis said, referring to the ability to travel out of state to other consulates or out of country to other embassies to renew their passports.

“It’s a class-struggle and also an ideological struggle,” he added.

IPS tried to reach out to the embassy for a statement from Guaidó’s representatives, but the phone lines were cut, and there is no other contact information listed on their website.

Protestors fighting against the U.S. intervention in Venezuela had kept a small group of four protestors inside the Washington embassy, starting about two weeks prior to the visa revocation on Apr. 24 until May 16 when police in Washington used a battering ram to enter the building.

Adrienne Pine, an associate professor of anthropology at American University, was one of the final four protestors occupying the embassy. Other protestors had left after an eviction notice was posted by U.S. police on May 13. She was arrested on May 16, and released the following day after a court appearance. She is neither a member of Code Pink nor a Venezuelan.

When asked why she remained in the embassy until her arrest, Pine told IPS: “I am a United States citizen, and I feel passionate about our government not engaging in regime change operations and not acting as an imperial actor around the world.”

On May 15, the permanent representative to Venezuela, Samuel Moncada, stated to the United Nations that the U.S. actions in attempting to occupy the embassy was a “pretext of war”.

He called for the U.S. to respect international law and warned of a violation of respect for diplomats worldwide.

In response to Moncada, spokesperson for U.N. Secretary-General António Guterres, Stéphane Dujarric, stated in a U.N. press briefing on May 16: “We hope that the situation is resolved peacefully, bilaterally between the United States and Venezuela.”

The U.S. is legally allowed to recognise Guaidó, but under international law in Article 45 of the Vienna Convention, the violation of diplomatic offices of other governments is not allowed.

Pine warned of the U.S. police occupation of the embassy, “What it basically signals is that no embassy around the world is safe.”

Dozens of nations, including the U.S. and many of its western allies, recognise Guaidó as president of the Latin American nation. The U.N., however, continues to recognise Maduro as president.

Though the U.N. has not agreed with the actions of the U.S., Benjamin believes the response from the U.N. and the international community has been too limited. She explained that this is “absolutely because of the United States. In any other country, I think the U.N. would have stepped in.”

Luis, who has family on both sides of the political aisle, is in support of the on-going international dialogue. He told IPS: “The ones who are left to pay are us, you know, the ones who want to have peace.”

“I just want my family to have a normal life,” he added.