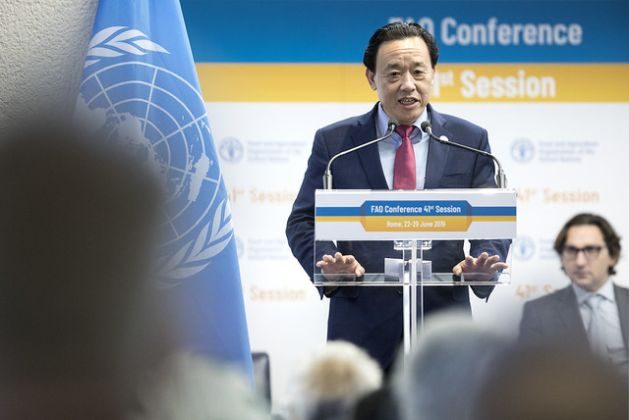 Mr Qu takes over from José Graziano da Silva who has been in the post since 2012 and completes two terms in July 2019.  Mr Qu has a doctorate in agricultural and environmental sciences from Wageningen Agricultural University in the Netherlands, and has held several senior positions including as vice president of the Chinese Academy of Agricultural Sciences. His most recent job was that of Vice Minister of Agriculture. He will take over his new position on 1 August 2019.

In his speech to the Member States prior to the election, Mr Qu outlined some of his key priorities.  These include “a focus on hunger and poverty eradication, tropical agriculture, drought land farming, digital rural development and better land design through transformation of agricultural production”. Over the coming weeks Mr Qu and his team will be translating these ideas into action plans.  The article below provides thoughts on a few big issues mainly related to production and trade, which should have high priority on their agenda.

With regard to the first set of issues related to production, Mr Qu and his team will need to develop a vision for global agriculture in the coming decades.  Climate change is bringing about new temperature and rainfall patterns across the world. At the same time, rising incomes and larger populations mean that demand for agricultural products will increase. This will be accompanied by shifts in demand patterns. In most countries this will mean a move away from staple foods, such as wheat, rice and maize towards higher-value food products, particularly livestock and horticultural products; as well as towards agricultural raw materials, including animal feeds.

Critical questions that need answers include: how these emerging demands will be met; what changes in production systems and technologies will be needed; how domestic and international trade patterns for agricultural inputs and outputs will develop; and what impact that this would have on soils, air and water quality. Within this context, the new Management will need to identify the roles of governments, private sector and civil society and to start a conversation with these actors at global, regional and country level about what role FAO could play to support these changes.

Although no blue-print may emerge from these discussions, it is likely that many of these issues will require smart, tech-based solutions. The ICT revolution in agriculture has barely started and in the coming years new approaches such as precision agriculture and “smart” value-chain logistics will play a leading role.

Mr Qu will doubtless be aware that much of the needed technologies are imbedded in machinery, inputs and software that have been developed in the rich countries of Europe and in the USA, and come at high cost with large profit margins for the companies that developed them.

In the short run these costs will need to be lowered – the kind of negotiations done by the World Health Organization with the big pharmaceutical companies to lower medical drug prices for poor countries provides a good model to follow. However, in the medium to long run alternatives sources of technology will need to be developed. Countries with large agriculture research systems such as Brazil, India and China must lead this. Equally complex issues surround the use of Genetically Modified Organism (GMOs).

GMOS have a massive potential but issues about its proper and safe use have become mired in a poorly informed political debate.  Mr Qu will need to draw on his technical knowledge and experience, as well as his instincts as a scientist, to develop new strategies and approaches for FAO.

With regard to international trade, the shift to greater and more diversified consumption will require specialization across countries and regions, and a rapid increase in international trade. Global food imports have already tripled since 2000 to US$1.47 trillion.

Strong growth will continue as production of field crops, particularly food staples and feed (particularly soybean), will likely shift to countries with abundant land areas such as in North and South America, and Russia & Eastern Europe.

However, many countries are apprehensive about increased reliance on food imports – and for good reason.  Currently, the bulk of world grains trade is handled by four companies – the so called ABCDs: ADM, Bunge, Cargill and Louis Dreyfuss.

These companies have been in the grain trade business for over a century and their network of silos, ports and ships gives them a virtual stranglehold on the business.  However, their dominance is now being challenged by the China National Cereals, Oils and Foodstuffs Corporation (COFCO) and its international trading arm (COFCO International).

If FAO has to play a catalytic role in the above mentioned issues, Mr Qu will need to articulate and start implementing a new HR and staffing strategy for FAO.  Mr Qu will need to rebuild the cohort of highly experienced technical staff who can dialogue on policy and programmatic issues with countries and in global forums.

They need to be able to lead FAO’s work related to standards setting, creation of global public goods and international surveillance of pests, disease and emissions related to agriculture.  As part of this he also needs to rebuild the rift that has developed between staff and management, and with the decentralized offices which often work in a fragmented and opportunistic manner with little strategic focus.  To do this, Mr Qu will need to draw his experience as a senior manager in the Ministry.

Mr Qu takes over at a time when the global order is changing rapidly.  As he moves forward, including on some of the issues above, there will be opposition.  Some of this will play on the fears of an emergent “non liberal” China. He will also likely be accused of being a puppet of the Government.  Mr Qu will need to rise above past these criticisms and courageously take on a dynamic agenda.

Daud Khan is a retired UN staff based in Rome and Pakistan. He has degrees in economics from the London School of Economics and the University of Oxford; and a degree in Environmental Management from the Imperial College of Science and Technology. At Oxford he was a Rhodes Scholar.