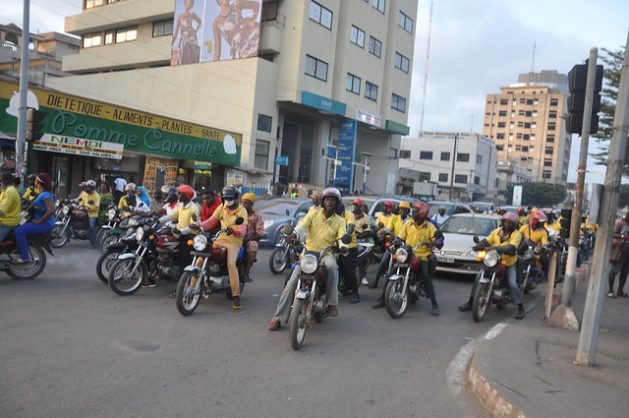 Yellow t-shirt clad Zemidjans wait for the traffic light to turn green at one of Cotonou’s busiest roads. Zems drivers here come from nearby countries such as Togo, Guinea, Burkina Faso, Senegal, Gambia, Niger, Ghana, Nigeria, among others, but also from Central Africa nations such as Democratic Republic of Congo, Cameroon and Congo-Brazzaville. They are skilled and unskilled men, holders of degrees and diplomas, and school leavers. Credit: Issa Sikiti da Silva/IPS

COTONOU, Benin, Jul 8 2019 (IPS) - Richard Dossevi parks his motorcycle taxi on one of the busiest street corners in Cotonou, Benin’s commercial capital, to wait for commuters amid the summer heat.

It has been four years since he left his native Togo to seek work opportunities in neighbouring Benin. He found none.

So the marketing graduate had no choice but to become a Zemidjan or Zem (motorcycle taxi driver).

“I couldn’t go back home empty-handed because I’m the first-born in our family and the expectations were high,” he tells IPS.

“It was hard in the beginning, but four years down the line, I can say that my life has taken another direction,” he says.

Despite its unregulated status—no driver’s license is needed and number plates are not compulsory; and despite being one of country’s major polluters—83 tons of greenhouse gases are emitted per day in Cotonou alone according to the World Bank: the motorcycle taxi sector in Benin plays a major role in moving people and goods in and around big cities and small towns in the absence of adequate public transport.

There is always a need for more Zemidjans, and foreigners looking for work and countryside locals step into the jobs and simply start making money.

Zems here also come from nearby countries such as Togo, Guinea, Burkina Faso, Senegal, Gambia, Niger, Ghana, Nigeria, among others, and also from Central African nations such as Democratic Republic of Congo, Cameroon and Congo-Brazzaville. They are skilled and unskilled men, holders of degrees and diplomas, and school leavers.

At lunchtime, Cotonou’s multi-national Zems meet at different places in the city to rest and discuss various issues affecting the continent and this region.

Despite the region’s economic and human potential, its social and economic problems seem to be getting worse day by day. West Africa’s recurrent problems include, among others;

According to the U.N. refugee agency, a combination of “ethnic violence, intra-state conflicts and extremism continue to generate internal displacement and a parallel influx of refugees across West Africa”.

The U.N. Children’s Fund notes that “more than 9.7 million people are displaced across the region [West and Central Africa], including more than 5.7 million children who have been uprooted from their homes.”

The situation has led to thousands of disgruntled youths leaving their homelands in numbers for greener pastures. The International Organisation for Migration (IOM) reported in June 2018 that it had assisted more than 10,000 migrants from 10 West African countries stranded in Niger to return home. There are also an estimated 800,000 registered West African migrants living in European countries, according to a report authored by Hein de Haas for IOM.

High levels of corruption and poor political leadership are being blamed for these problems, as newly-elected political leaders “claiming to do something different’’, fail to improve people’s lives.

Politics seems to dominate the debate of the Zemidjan drivers today.

Issiaka Traoré, from Burkina Faso, charges: “All these guys we have now are a bunch of corrupt crooks … They swindle state resources to enrich themselves, while we are dwelling into misery without jobs, schools, roads and clinics.”

Another Zem from Mali, Ibrahim Keita, intervenes: “If we had good leaders … we wouldn’t be darkened by the sun every day from six to six, and we wouldn’t be standing here and wasting our time. We should have been in factories or offices working hard to make a decent living and paying taxes.”

State corruption has also played a huge role in the lack of development of the region. “Corruption and poor governance are still big problems in Africa,” Zachary Donnenfeld, senior researcher at the Pretoria-based Institute for Security Studies (ISS), tells IPS.

“Of course, corruption absorbs money that could help to tackle the problem of terrorism, and sometimes it distorts decisions and strategic choices about how to overcome extremists and rebuild economic and social cohesion. If there was less corruption, which might free up some extra resources,” Paul Melly, a consulting fellow for the Africa Programme at Chatham House explains, adding that terrorism and extremist groups like Boko Haram have disrupted local economies.

In 2016, the World Bank estimated that Boko Haram’s raids, bombings, and razing of communities throughout the Lake Chad basin region, which encompasses parts of Cameroon, Chad, Niger, and Nigeria, caused 9 billion dollars worth of destruction. Millions have fled their homes and lost their livelihoods as a result of the terrorist attacks’ which also disrupted of farming and trade routes. 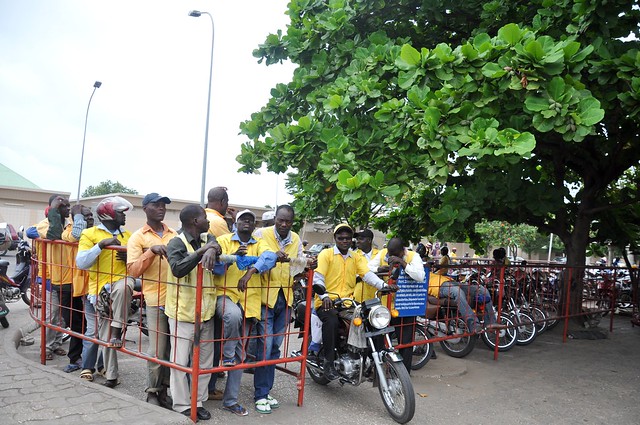 While the fight against extremism has been a difficult one, most West African nations seem to have legal and institutional mechanisms to help fight rampant corruption.

Transparency International has lauded Côte d’Ivoire and Senegal for their efforts in terms of legal, policy and institutional reforms undertaken to fight corruption, and also commended Gambia for political commitment combined with laws, institutions and implementation that help with controlling corruption.

However, while some of these strategies seem to be working only sporadically, Transparency International has slammed autocratic regimes, weak institutions and unresponsive political systems for continuing to undermine anti-corruption efforts. In its Corruption Perceptions Index 2018, which ranks 180 countries and territories by their perceived levels of public sector corruption according to experts and businesspeople, West Africa ranked between 10 to 39 on a scale of 0 to 100, with 100 being a corruption-free nation.

In Senegal, Khalifa Sall and Karim Wade, two popular contenders for the February 2019 presidential poll were arrested and sentenced for corruption and stealing public money, a move their lawyers and political parties still maintain was aimed at keeping them out of the poll and ending their political careers. After their sentencing, incumbent President Macky Sall comfortably won the elections in the first round.

In Benin, the government of Patrice Talon created an institution called CRIET (Cour de répression des infractions économiques et du terrorisme or Court of Repression of Economic Crimes and Terrorism) in 2018, to combat corruption, drug trafficking, money laundering and terrorism. But the National Union of Magistrates of Benin has said this practice of removing large sections of their jurisdiction from the ordinary courts and entrusting them to special courts, was part and parcel of fragmenting the judiciary.

Despite being criticised on a daily basis by ordinary citizens, opposition politicians and independent commentators for being a state-manipulated political court, CRIET continues to mete out controversial punishment. One such instance is the case of former 2016 presidential hopeful and multi-millionaire businessman Sébastien Ajavon who was sentenced in 2018 to 20 years in jail in absentia for drug trafficking despite being cleared of any involvement in the same drug case two years earlier. Ajavon has since been living in exile in France and at the time did not show up for the case stating he did not believe he would be guaranteed a fair trial.

Komi Koutché, former director of National Fund for Micro-finance and former Finance Minister in the government of former President Yayi Boni’s cabinet, was arrested in December 2018 in Spain after an international warrant for arrest was issued by CRIET. It had charged him for illicit enrichment and illegal possession of large sums of money.

A Spanish court quashed Benin’s extradition request after his lawyers argued that their client was politically persecuted.

In the meantime, there are those like Dossevi who wonder what their future will hold. While he admits that he regrets the years he spent studying hard for his tertiary education, in the hope that it would lead to a job with a good enough income that would have allowed him to support his siblings and even start his own family, he wants leaders to start being accountable.

“All this wouldn’t have happened if we had good leaders who really care about their people. We, Africans, are suffering because of bad and corrupt leadership,” Dossevi says.

Though Traoré is nostalgic for another time and another dream. One that the late Burkinabé revolutionary and former President Thomas Sankara fought for. Sankara, a Marxist, is still well remembered for how he developed his country’s education and health sectors, among others. At the time of his presidency his appointment of women to senior cabinet positions was unprecedented on the continent.

“West Africa will never ever have a leader of the stature of Thomas Sankara. That’s the guy that was supposed to improve our lives and foster development in this region,” Traoré says of one of the most forward-thinking and progressive leaders of the continent who was assassinated in 1987 at the age of only 37.