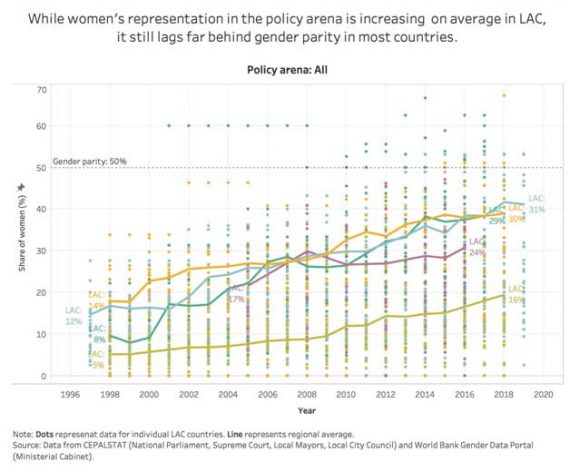 UNITED NATIONS, Jul 26 2019 (IPS) - Gender inequality is about power asymmetries. In the late 1970s, Robert Putnam reflected on the status of women in policy decisions in his comparative study on political elites. Quoting Elizabeth Vallance, he concluded that, “where power is, women aren’t.”.

The challenge for achieving gender equity by rebalancing power has to be addressed in different spheres: the household, the market, and society at large.

At the household-level, for example, women’s ability to make decisions about resource allocation or family planning are critical dimensions of empowerment; in the market, women’s access to economic opportunities, career advancement, and fair wages are of fundamental concern; at a society level, the main focus of this #GraphforThought, women’s capacity to influence decision-making is paramount to progress in terms of equity.

Fortunately, over the past several decades the face of politics has changed in many Latin American and Caribbean countries. Not only have women been elected to the highest office many times in Latin America and the Caribbean since 1990—but women representation is also expanding across multiple policy arenas from the national to the local level.

As shown in Graph 1, from (circa) 1997 to (circa) 2019 the share of women in important policy arenas, such as parliament, ministerial cabinet, and the supreme court, has nearly tripled.

However, as the graph shows—despite progress on average in LAC (the solid line) we are still well below parity level (the dotted horizontal line) and heterogeneity across countries within LAC remain substantial (by the individual country dots).

Moreover, it is important to note that while women’s representation overall has been increasing, minority women such as Afro-descendants and indigenous women remain systematically excluded from the policy arena. Why does it matter to have women in political leadership? Support of women’s leadership has a normative value in itself and should be a guiding principle in our societies. However, it also has instrumental value by helping to make the system more responsive to women’s demands and aspirations.

Evidence suggests that enhancing women’s representation in the policy arena can help to bring a gender-lens to policy—for example in issue areas such as travel mobility, starting a job, equal pay, marriage and divorce, parental leave, running a business, asset management and inheritance, and pensions.

For example, research on Brazil finds that women’s representation in municipal government leads to the adoption of more “women-friendly” policies in areas such as domestic violence and childcare.

Given the importance of women’s representation in the policy arena both intrinsically and instrumentally—what can be done to accelerate its progress?

Gender quotas (laws stipulating a required share or number of women in political positions) are an increasingly common solution, and perhaps one of the main drivers of why political representation has increased.

However, even where quotas exist, informal norms may clash with formal legal structures—leading to situations in which quotas remain unimplemented or strategically circumvented.

For example, in our region, we saw this in the case of the “Juanitas” and, more recently, the “Manuelitas” in Mexico, where women ran for office on the ballot in compliance with gender quotas—only to later renounce their position and cede it to a man. Cases such as this reveal the deeply entrenched discriminatory norms and beliefs still held by so many about women’s ability to lead.

Moreover, according to the World Values Survey, on average in Latin America, 23% of people still believe that “men make better politicians than women” reflective of the region’s historical machista culture.

While women continue to face both formal and informal barriers to entering the policy arena in Latin America and the Caribbean—the region represents a positive example of change in many ways.

These achievements have in turn respectively helped to redistribute greater de facto and de jure power to women, which further strengthens their voice in the policy arena and subsequently their ability to make the system more responsive to women’s demands and aspirations.