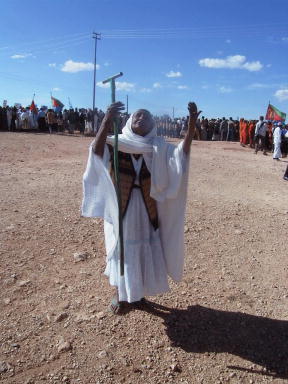 In Eritrea, many of the journalists who were jailed in the 2001 media crackdown remain behind bars, the Committee to Protect Journalists says. Courtesy: UN Photo

UNITED NATIONS, Sep 10 2019 (IPS) - Eritrea has the world’s highest levels of censorship and the most active government in jailing reporters and stifling newspapers, radio and television, a study by the Committee to Protect Journalists (CPJ) watchdog says.

The authoritarian Horn of Africa nation, which shuttered all independent media in 2001 and currently has some 16 journalists behind bars, is followed by North Korea and Turkmenistan as the world’s worst places to work as a reporter, the CPJ says.

“The internet was supposed to make censorship obsolete, but that hasn’t happened,” the group’s executive director Joel Simon said in a statement upon releasing the annual report Tuesday.

“Many of the world’s most censored countries are highly wired, with active online communities. These governments combine old-style brutality with new technology, often purchased from Western companies, to stifle dissent and control the media.”

In Eritrea, many of the journalists who were jailed in the 2001 media crackdown remain behind bars, the CPJ says. The government controls most broadcast outlets; internet connections are hard to find, and foreign radio signals are jammed.

Eritrea’s mission to the United Nations did not answer an interview request from IPS.

In North Korea, the official Korean Central News Agency (KCNA) runs nearly all the country’s newspapers and broadcasters and sticks to reporting on the latest comments and activities of the reclusive nation’s leader Kim Jong Un.

KCNA has typically been “highly restrictive in its coverage of foreign news”, but that changed in recent months, allowing for reporting on talks between Kim and United States President Donald Trump over Pyongyang’s nuclear weapons program.

Free media also remains largely absent in Turkmenistan, where President Gurbanguly Berdymukhamedov “enjoys absolute control” over newspapers and broadcasters and wields this power to “promote his cult of personality”, the CPS says.

“A handful of independent Turkmenistan-focused media outlets, such as Khronika Turkmenistana, operate in exile, and anyone who attempts to access the website can be questioned by the authorities,” the report says.

The group also names Saudi Arabia as an offender, spotlighting the murder and dismemberment of Saudi journalist and government critic Jamal Khashoggi in the country’s consulate in Istanbul, Turkey, in October 2018.

The oil-rich kingdom has witnessed a “sharp deterioration” in media freedoms during the ascendancy of the country’s crown prince and de facto ruler Mohammed bin Salman, with new anti-terror and cybercrime laws helping to silence journalists, the CPJ says.

The CPJ report was released only days after the hardline religious militant Taliban group kidnapped six local journalists in Afghanistan last week, as they were travelling to a media workshop in Paktika province.

CPJ researchers noted that journalists struggled with war and instability in such countries as Afghanistan, Syria and Somalia, but said that these issues were “not necessarily attributable solely to government censorship”.

The CPJ media freedom ranking is similar to the list compiled by Reporters Without Borders, another watchdog, which also shames Eritrea, North Korea and Turkmenistan as the world’s worst three countries for independent journalism.