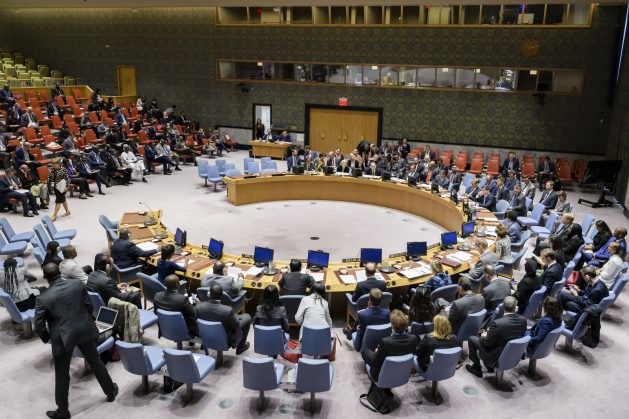 This week UN Security Council considered the situation in Syria. Aid groups operating in northeastern Syria have been raising the alarm about civilian casualties and an impending humanitarian crisis this week, as Turkey began a military assault on the turbulent region’s Kurdish militants. Credit: UN Photo/Manuel Elias

UNITED NATIONS, Oct 10 2019 (IPS) - Aid groups operating in northeastern Syria have been raising the alarm about civilian casualties and an impending humanitarian crisis this week, as Turkey began a military assault on the turbulent region’s Kurdish militants.

Doctors Without Borders (MSF), Human Rights Watch (HRW) and other groups warned about everything from massive new flows of refugees to conditions for detained Islamic State (IS) fighters from a previous phase in Syria’s chaotic civil war.

MSF teams “remain ready to provide medical care after the Turkish military launched operations” and “are preparing for a potential increase of patients linked to the conflict,” the group said in a statement Wednesday.

“We have seen people being displaced from locations along the border due to the conflict and are extremely worried that the military intervention will threaten the safety and wellbeing of the Syrian people,” the group said.

United Nations spokesman Farhan Haq said aid groups would have “scale-up at a time of crisis” and urged the region’s armed forces to keep the Turkey-Syria border open so that aid trucks could bring food, medicine and other gear to those affected by fighting.

Ankara seeks to create a “safe zone” to return millions of refugees to Syrian soil and end a “terror corridor” on Turkey’s southern border. Turkey says Kurdish YPG fighters in northeast Syria are terrorists due to their links to militants waging an insurgency inside Turkey.

Turkey had been preparing to advance into Syria’s northeast since U.S. troops started pulling out of the area in a policy shift by Trump that was widely condemned in Washington as a betrayal of America’s armed Kurdish allies.

“Trump’s decision to give Turkey the green light to launch an incursion into northeast Syria could have major humanitarian consequences,” Schwartz, a former U.S. State Department official, said in a statement.

“It could open new fronts in the conflict and newly displace hundreds of thousands of civilians across an area already in the grip of a humanitarian crisis [and] likely force international relief groups to evacuate just when they are most needed.”

Doz, a youth aid organisation, said Ankara’s stated objective of resettling some 2 million Syrian refugees from Turkey back to their homeland was tantamount to “demographic engineering and ethnic cleansing”.

In a statement, Doz urged the European Union, the U.N. and the U.S. to try to “prevent this war”, which will have “dramatic consequences such as new mass forced migration and directly affect the life of 6 million civilians.”

Fighting in the struggling northeast could “revive” prospects for IS and “cause the release” of some 12,000 hardline militants who are detained by Kurdish forces at al-Hol and other camps in Syria’s northeast, said Doz.

HRW, a New York-based campaign group, said the detained militants across some seven lockups in the northeast included 4,000 foreign fighters who should be repatriated to their countries of origin.

“Thousands of people, including children, are stuck in what amounts to shockingly overcrowded prisons on suspicion of being IS, but no one is accepting responsibility for them,” said Letta Tayler, a crisis researcher for HRW.

“Any authority that effectively controls these informal prisons is legally bound to urgently improve conditions and ensure that each and every detainee is held lawfully.”