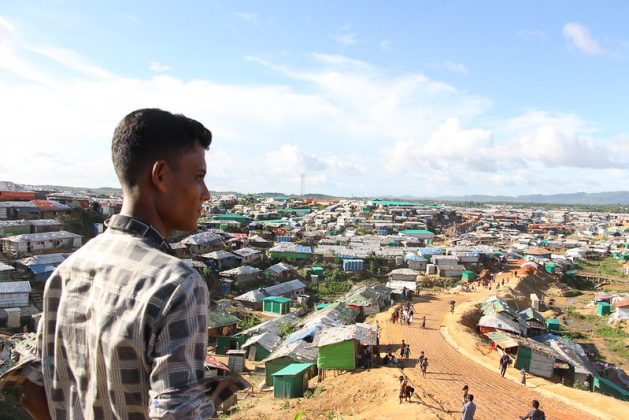 Over a million Rohingya refugees are without a state as Myanmar refuses to recognise them as citizens. Pictured here is the refugee camp in Cox’s Bazar along Bangladesh border with Myanmar. Credit: ASM Suza Uddin/IPS

UNITED NATIONS, Oct 8 2019 (IPS) - Movie star Cate Blanchett and businessman Richard Branson spoke up this week for the millions of people around the world who cannot get passports and other papers because they lack an official nationality.

The United Nations says the problem — known as “statelessness” — is getting worse, as a worldwide trend towards nationalism means governments are increasingly loath to help people viewed as unwelcome outsiders.

From the mostly-Muslim Rohingya people across Myanmar and Bangladesh to the masses of stateless folks in Côte d’Ivoire, Thailand, Latvia, Syria and Kuwait, Blanchett, Branson and others urged governments to tackle the problem.

“Statelessness has a devastating impact on millions of people around the world,” Blanchett, an Australian double Oscar-winner, told journalists on Monday during a week of intergovernmental talks in Geneva.

“They experience marginalisation and exclusion from cradle to grave … It’s total invisibility.”

By one count from 2017, some 70 countries reported on 3.9 million stateless individuals, but the U.N. agency for refugees, UNHCR, says the real figure globally is likely three times higher with some 12 million people impacted.

The world’s biggest stateless population are the Rohingya, hundreds of thousands of whom have sought safety in Bangladesh after fleeing violence in Myanmar, which does not recognise them as citizens.

“No one should have to suffer the indignity and exclusion that comes with being stateless,” Branson, a British billionaire wrote on Monday.

“Fortunately, over a hundred states have come together in Geneva this week to commit to do more to put an end to statelessness once and for all.”

It’s difficult to imagine how any country can maximise its potential by ignoring significant populations of stateless people. My take on statelessness and how to solve it https://t.co/R5gRApf5pa #IBelong @Refugees pic.twitter.com/SoGgG1rJtb

The U.N. calls statelessness a “man-made problem” stemming from a “bewildering array of causes” — often legal directives and the re-drawing of national borders. Some 600,000 people remain stateless after the disintegration of the Soviet Union.

Stateless people are often denied certificates at birth and remain excluded for the rest of their lives, the U.N., says. They lack the papers for travel, marriage, work, schooling, healthcare, and opening bank accounts.

“Statelessness can deny people and communities their identity and sense of self, contributing to the breakdown of family and social relationships and creating legal problems for generations,” said U.N. deputy secretary-general Amina Mohammed.

“And stateless people are voiceless people. Prevented from voting or participating in public life, they are without representation anywhere.”

U.N. High Commissioner for Refugees Filippo Grandi said the decade-long “#IBelong” campaign was making gains towards ending statelessness by 2024, with more than 220,000 stateless people acquiring a nationality since 2014.

“This is an area in which – for relatively little investment – wide-reaching impact is within our reach,” said Grandi.

In July, Kyrgyzstan became the first country to officially end statelessness. The U.N. says Kazakhstan, Turkmenistan, and Tajikistan could also meet the 2024 deadline; while Thailand is boosting efforts on its 479,000 ethnic hill tribespeople and other stateless individuals.

Madagascar and Sierra Leone have rewritten their laws so that mothers can confer citizenship to their children, as fathers have long been able to do. Still, 25 nations do not readily grant mothers this right – one of the leading causes of statelessness globally.

But Grandi also highlighted the Rohingya, and the Indian state of Assam, where Prime Minister Narendra Modi’s Bharatiya Janata Party (BJP) has vowed to disenfranchise millions of Muslim immigrants amid a polarising election campaign.

“The progress is far from assured: damaging forms of nationalism, and the manipulation of anti-refugee and migrant sentiment – these are powerful currents internationally that risk putting progress into reverse,” said Grandi.