Ambassador Jan Eliasson, in an address to the fourth Stockholm Security Conference.
Ambassador Jan Eliasson is a Swedish diplomat and Chair of the Governing Board of the Stockholm International Peace Research Institute (SIPRI). He was Deputy Secretary-General of the United Nations from July 2012 to December 2016 and Sweden's Minister for Foreign Affairs in 2006 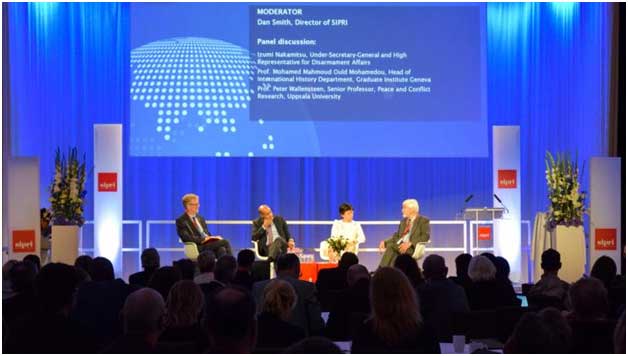 STOCKHOLM, Oct 4 2019 (IPS) - We will look at how modern conflicts will be affected by the recent unprecedented technological and societal developments. The nature of conflict is also changing. It is becoming more protracted, complex and unpredictable.

And let us not forget the wider picture – that modern conflicts are occuring against the backdrop of climate change, inequalities between and inside countries, injustice and human rights violations.

All this is already altering the way we live, work and relate to one another. It also profoundly impacts national and international security.

Artificial intelligence is all around us. From smartphones to smart cars, from drones to social media feeds, from streaming services to google translate software. In many ways, it does under the circumstances make our lives more comfortable.

Yet, the downside of advancing technology is the growing potential for harm. The same technology used in remote controls of home appliances may be used to “switch off” a power grid, a city or even a whole country.

“Cyber warfare”, “lethal autonomous weapons systems” – these expressions have already firmly entered our vocabulary. Even “space wars” might soon be more than just a product of once wild imagination. 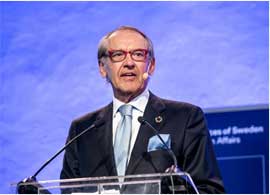 In a way, this is not new. The history of warfare and international security is the history of technological innovation. From spear to rifle, from rifle to machine gun and from machine gun to drones. From conventional to nuclear. New technologies and new weapons have changed the conditions of warfare since prehistorical times.

As new technologies such as autonomous weapons become easier to use, small groups or even individuals may gain access to such weapons, using them to cause harm on a massive scale. This new vulnerability leads to new levels of risks and to new fears.

At the same time, advances in technology have the potential to reduce the scale or impact of violence through the development of new modes of protection. For example, greater precision in targeting should lead to less loss of civilian lives. Regretfully this is often not the case.

Digital connectivity, big data, high tech facial recognition technology – all these technologies are already used by humanitarian actors to provide a more efficient humanitarian response. Families separated by war have a chance to get reunited much faster thanks to new technologies.

So, is it a perfect storm or a window of opportunity?

Can the technological revolution bring us to catastrophes or will it offer innovative solutions? Will we lose human control over technology or will it become a tool of peace?

What if, one day human and artificial intelligence together could design formulas for prevention and conflict resolution?
Albert Einstein once said: “It has become appallingly obvious that our technology has exceeded our humanity”. As an optimist – even though, lately, a worried optimist – I hope that we, together, can prove this to be wrong. It is our humanity that must prevail.

In the end, it all comes down to people and to values. To the fundamental principle of humanity. To “We, the peoples, …”. The first three words of the UN Charter.

Before I pass the floor to our distinguished key-note speaker and a dear friend of mine, UN USG Izumi Nakamitsu, I would like to say a few words of gratitude.

I would like to say Thank You to our partners and co-organisers of today´s event – Munich Security Conference, Crisis Management Initiative, MSB – The Swedish Civil Contingencies Agency and Mercy Corps.

A special thanks also to the Swedish Parliament that founded SIPRI as an international, independent organization in 1966 and to the speaker Norlén for being present here today.

Finally, I would also like to thank a special friend of SIPRI, Baron Per Taube, for his generous support of this conference and many other SIPRI initiatives and dialogues.