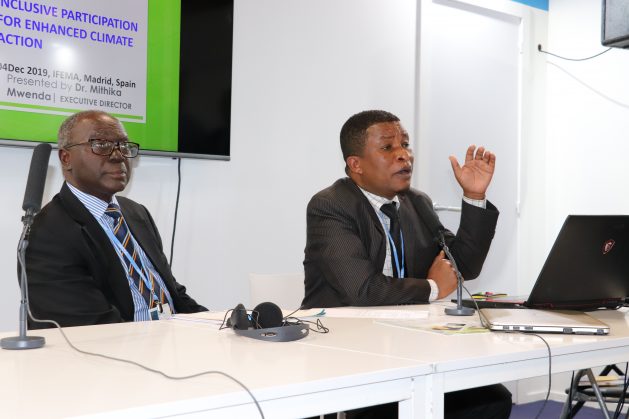 Dr Mithika Mwenda of PACJA (right) and Professor Seth Osafo (left), one of the negotiators at the climate talks currently being held in Spain. Credit: Isaiah Esipisu/IPS

MADRID, Dec 6 2019 (IPS) - African legislators have been challenged to come up with legal frameworks for climate change to enable countries avoid catastrophes and reactionary emergencies that eat up their budgets.

“African countries are spending up to 3.9 percent of their GDPs on climate emergencies, which in many cases have not been budgeted for,” said Dr. James Murombedzi, the head of the Africa Climate Policy Centre (ACPC) at the United Nations Economic Commission for Africa (UNECA).

During an event on the sidelines of the ongoing 25th Conference Of The Parties (COP25), the U.N. climate negotiations in Madrid, Spain, climate experts, civil society organisations and U.N. representatives observed that legislators in African countries should mainstream climate change in all their national development plans as a way of adapting to the phenomena.

This comes at a time when the East African region is experiencing unprecedented floods due to the 300 percent above average, heavy downpour that is occurring during what is supposed to be a short rainy season. Over the past two weeks, floods have killed more than 100 people in Kenya alone, displacing hundreds of households, breaking river banks, dams and even houses.

“What are we going to tell our people?” asked Roger Nkodo Dang, the President for the Pan Africa Parliament during an event at COP25. “As African legislators, we need to play our role, and then speak with one voice to call for funding so as to develop resilience,” he said. 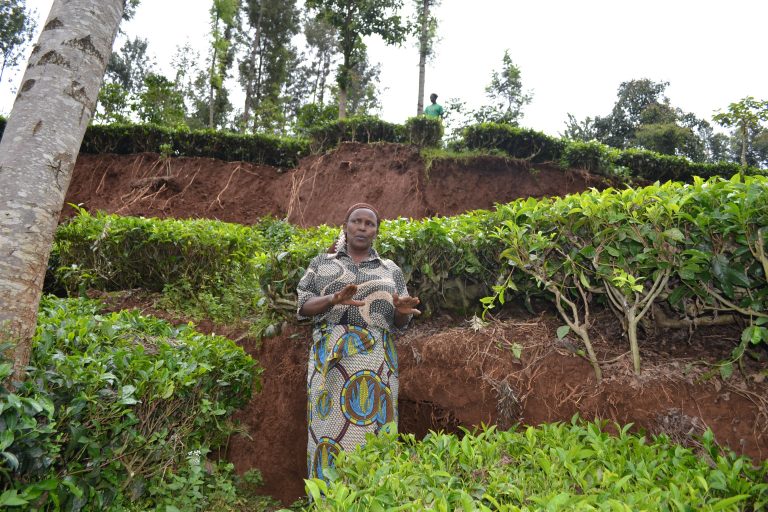 According to Gareth Phillips, the manager for Climate and Environmental Finance at the Africa Development Bank (AfDB), African politicians can take advantage of low-hanging fruit in terms of climate action, but only if there are sound legislative frameworks in place.

“We can start by enacting legislation that; encourages renewable energy targets and non-fossil fuel obligations, the removal of fossil fuel subsidies, while at the same time providing subsidies for renewable energy, and observes the energy efficiency standards, building standards and performance,” said Philips.

He urged them to focus on adaptation instead of mitigation, and take advantage of the Adaptation Benefits Mechanism – a new mechanism being developed by the AfDB that is designed to facilitate payments to project developers for the delivery of certified adaptation benefits.

The delegates were reviewing the role of African parliamentarians in implementing the Paris Agreement, with focus on challenges and prospects.

However, according to preliminary findings of an ongoing study commissioned by the Pan African Climate Justice Alliance (PACJA) in eight selected countries — Botswana, Ethiopia, Gabon, Côte d’Ivoire, Kenya, Nigeria, Tanzania and Zambia — there is still a long way to go for African countries to implement their suggested NDCs.

“It is clear that many countries do not have legal frameworks on climate change, which should be the main vehicle for implementation of the Paris Agreement,” Dr Mithika Mwenda, the Executive Secretary at PACJA, told IPS.

Countries like Kenya, which has its National Climate Change Framework Policy in place, were seen to be progressing better than those without.

“With this policy, we have been able to mainstream climate change in all national development plans, and this makes it easy to allocate budgetary funds to specific activities directly related to climate change,” Dr Charles Mutai, the Director of Climate Change at the Ministry of Environment and Natural Resources in Kenya, told IPS.

Based on national legislation, county governments have followed suit, where six of them have already enacted county-specific climate change legislations, and this has enabled them to directly allocate funds to adaptation and related activities.

However, according to the new U.N. Environment Programme (UNEP) report, unless GHG emissions fall by 7.6 percent each year between 2020 and 2030, the world will miss the opportunity to get on track towards the 1.5°C temperature goal of the Paris Agreement, and this is a pointer to even more devastating climate related disasters that what is being experienced at the moment.