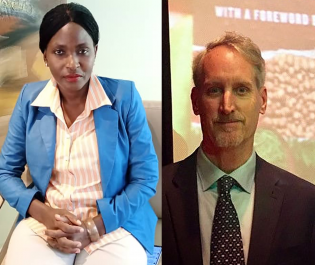 By Emmanuel Hitimana
When Rwandan-born, Senegalese-raised entrepreneur and businesswoman Kristine Ngiriye was 18 she had a brilliant idea that she wanted to translate into a business. But when she went to her local bank for a loan they told her to rather get married, because “ a woman must be married instead of venturing into business”, Ngiriye tells IPS.

By James Reinl
Experts vaunted new strains of seeds, drone aircraft and other technological breakthroughs as solutions-in-the-making for farmers in Africa, where hunger, drought and food price hikes are continent-wide problems.

By Nafissatou Diouf
The Sasakawa Association will work with the Japan International Cooperation Agency (JICA), to help double rice production to 50 million tonnes by 2030.  Japanese Prime Minister Shinzo Abe made the announcement at the Sasakawa Africa Association (SAA) symposium held on Wednesday during TICAD7.

By Friday Phiri
In December 2015, nations of the world took a giant step to combat climate change through the landmark Paris Agreement. But African experts who met in Nairobi, Kenya at last week’s Seventh Conference on Climate Change and Development in Africa (CCDA VII) say the rise of far-right wing and nationalist movements in the West are threatening the collapse of the agreement.
Next Page »
ADVERTISEMENT ADVERTISEMENT