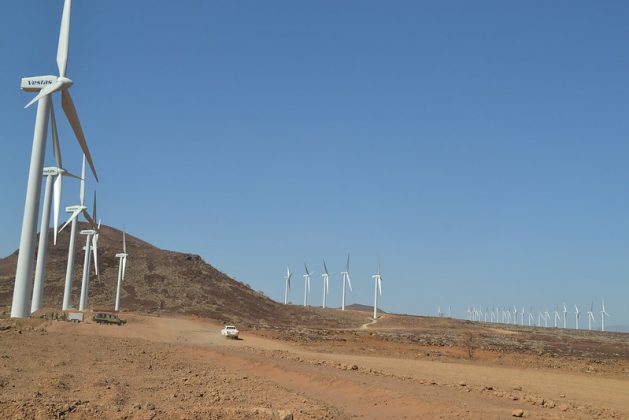 A wind energy generation plant located in Loiyangalani in northwestern Kenya. The plant is set to be the biggest in Africa, generating 300 MW. This renewable energy project was supported by the African Development Bank. Credit: Isaiah Esipisu/IPS

BONN, Germany, Jan 13 2021 (IPS) - 2021 is going to be critical, not only for curbing the rapidly spreading COVID-19 pandemic, but also for meeting the climate challenge.

But as Dr Fatih Birol, Executive Director of the International Energy Agency (IEA) was clear to point out, the climate challenge is essentially an energy challenge. And as large polluters continue to commit to targets of net zero emissions by 2050, the world could — in theory — potentially address the climate challenge.

“The energy that powers our daily lives our economies also alone produces about 80 percent of global emissions,” Birol noted while addressing the virtual COP26 Virtual Roundtable on Clean Power Transition earlier this week on Jan. 11.

And as the UN plans to focus on building a global coalition for carbon neutrality by the middle of this current century, there will be increased focus and a push towards providing clean, renewable energy to all by 2030.

Clean and renewable energy was the focus of discussion of this weeks COP26 Virtual Roundtable on Clean Power Transition.

Birol said the good news was that China, the European Union, UK and Japan have ambitious 2050 net zero emission targets. He said he was positive that once he took office, United States President Elect Joe Biden would make similar commitments and other major developing nations may join. The joint global emissions by the current countries committed to the net zero emission targets amount to 60 percent of the world’s emissions.

“The issue is how to transform these ambitions into real energy action,” Birol said. He said in light of this the IEA was going to introduce the world’s first roadmap to net zero emissions by 2030, scheduled to be released on May 18 so that it can be used for input for COP26.

The roadmap will outline how the world needs to transform the energy sector, how much investment is needed and what needs to be done to reach the target and “provide a concrete plan for all of us”.

Noting the figures of some 789 million people across the globe without access to electricity — the majority of whom live in sub-Saharan Africa, Guterres said that while all nations need to be able to provide electricity to all, this energy needed to be “clean and renewable so it does not contribute to the dangerous heating of our planet”.

According to the IEA, while the number of people without access to electricity has decreased over past years — with some two-thirds of the world’s progress occurring in India “where the government announced that more than 99 percent of the population had access to electricity in 2019, thanks to the ambitious Saubhagya Scheme launched in October 2017” — reaching a low in 2019, the COVID-19 pandemic has reversed past gains particularly in sub-Saharan Africa.

“Sub-Saharan Africa, home to three-quarters of the global population without access to electricity, has been particularly hard hit, and recent progress achieved in the region is being reversed by the effects of the pandemic: our first estimates indicate that the population without access to electricity could increase in 2020 for the first time since 2013,” IEA states in its SDG7 Data and Projections report.

“We have to make something clear. The energy transition story is also the energy access story, especially in Africa. We must recognise that we cannot achieve net zero emissions by 2050 without delivering sustainable energy for all by 2030,” she said.

Ogunbiyi, who was the first female Managing Director of the Nigerian Rural Electrification Agency, went on to say that 2021 was a pivotal year for Sustainable Development Goal 7 which focuses on access to affordable and clean energy for all.

She said with less than 10 years to go on the SDGs, the world must “now turn towards supporting bold and ambitious plans that will deliver impact at scale to help achieve SDG 7 by 2030”.

Adesina acknowledge that Africa had the lowest levels of access to energy in the world with 570 million people without electricity.

“The challenge for Africa is simple. Africa has so little electricity. This presents a real opportunity to build reliable, affordable and sustainable energy systems for Africa,” Adesina said. He said this is one of the reasons why the bank had launched the Light Up and Power Africa project as one of its High 5 priorities for transforming the continent. Since 2015 the bank has provided electricity for 16 million people by focusing mainly on renewable energy, Adesina said.

Indeed, his comments comes as just last week the AfDB announced it would roll out a second giant electricity-generation project this time in the the Sahel. The first, largest solar power project in the world is funded by the bank and based in Morocco.

The bank stated that the Desert-to-Power project — which covers 11 countries from Senegal in the west to Djibouti in the east, and includes the Sahel countries of Burkina Faso, Chad, Mali, Mauritania and Niger — when completed, “will turn the Sahel into one of the largest solar-power-generating areas in the world”. The AfDB went on to state that the $20-billion programme “aims to produce 10 gigawatts of electricity by 2025, providing 250 million people with power, of whom at least 90 million will be connected to the electricity grid for the first time”.

“The bank has been at the forefront of transformative renewable energy projects in Africa, including large-scale concentrated solar power projects, in Morocco…which are the largest in the world, the wind to power project which is the largest in sub-Saharan Africa,” he said, adding that the AfDB would no longer support coal projects.

“Unlocking that renewable energy future will ensure that we have a clean Africa, however, there are some challenges,” he said, explaining that this included the intermittency of solar and wind, the need for baseload power for grid stability, and the prohibitive costs of energy storage with policy and regulatory environments for renewable energy.

Adesina said the bank expected to invest $10 billion over the next five years in the energy sector.

Meanwhile Ogunbiyi  highlighted the importance of commitments as well as their financing and technical support for successful transition to renewable energy.

“Both the COP26 campaign and the UN high-level dialogue on energy need to be mutually reinforcing, just as energy access and energy transition are support another,” Ogunbiyi said. She said that the UN energy compact — an outcome of the UN high-level dialogue on energy — would be where countries can pledge their new ambitious commitments on sustainable energy in writing.

As member states, organisations, countries and cities sign up to the UN energy compacts, Ogunbiyi said it was critical that the international community rally around these commitments and support them with financing and technical assistance.

Meanwhile, Birol said critical to achieving net zero emissions was bringing the world’s countries together and providing momentum within an international context.

COP26 will be hosted by the United Kingdom and held in Glasgow, Scotland Nov. 1 to 12 and could provide the impetus for this momentum.

The UK announced the Climate Compatible Growth (CCG) programme — a £38 million fund that will focus on supporting developing nations transition to green energy.

Dr Amani Abou-Zeid, Commissioner for Energy and Infrastructure at the African Union said the that 900 million people in Africa depended on charcoal and firewood for cooking.

“This is not only an economic problem but mainly a moral issue and cause,” Abou-Zeid said.

Indeed the access to energy is also about human rights.

BrightGreen recycles post harvest waste, waste left on farms after harvesting, and then processes the waste into fuel that is easily adaptable by customers.

“They don’t need much change in behaviour in switching cost because the customers we are dealing with are very risk adverse and very money tight,” Lesan explained.

She said in response to a question on how to accelerate energy services to Africa, she said a key indicator was how good energy access services improved the lives of people in Africa.

“We are beginning to understand that as much as we are in the cooking energy space, our work is directly impacting the most basic human rights, even outside energy,” Lesan had said.