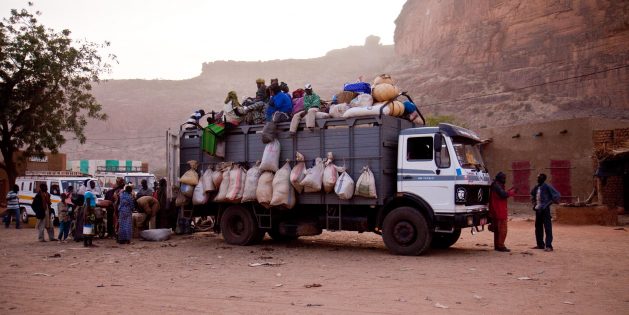 COTONOU, Benin, Nov 8 2019 (IPS) - Buses carrying cross-border traders and goods from Cotonou in Benin to Bamako in Mali have recently been using the Lomé route — travelling through the capital of Togo and then getting onto the Ouagadougou corridor on their way to the Malian capital.

“The Lomé-Ouaga route is smooth and there are no potholes. It makes life easier for both drivers and passengers. Long distance travels needs good roads because it is very challenging for transporters and thousands of traders who depend on this business to survive,” Ali Oumarou, a transporter who travels the 950 km route, tells IPS in while in Benin’s commercial capital, Cotonou.

“Bank investments in regional infrastructure are helping to improve connectivity across Africa, linking rural areas to towns and cities, linking producers and consumers across national boundaries, promoting trade and investment and building regional markets,” the AfDB pointed out.

Traders and those transporting goods and people across these routes have appreciated the new infrastructure. “This road has cut short our journeys and helped us a lot. Before we used to travel for six days to Ouaga from Lomé due to the bad state of the road, but since the road was rehabilitated, it only takes us two days, depending on the condition of the car,” Vincent, a long distance driver, told IPS.

Reinvigorated by the successes harvested under the GCI-VI, during which it had a capital of $90 billion, the AfDB has embarked on the capital increase exercise to do much more to improve the citizens’  lives of its member states.

Last week, the Governors of the AfDB met in Cote d’Ivoire’s capital Abidjan, approving a historic $115 billion increase to the bank’s authorised capital base to $208 billion.

According to AfDB President Akinwumi Adesina,  “We have achieved a lot, yet there is still a long way to go. Our responsibility is to very quickly help improve the quality of life for the people of Africa. This general capital increase represents a very strong commitment of all our shareholders to see better quality projects that will significantly have an impact on the lives of the people in Africa –  in cities, in rural communities, and for millions of youth and women.”

The funds are expected to improve the lives of:

One of the key focuses of the bank going forward will be climate change. The bank currently invests in various climate change projects, such as the Desert to Power initiative, which will help supply electricity to 250 million people in 11 countries across the Sahel by tapping into the region’s abundant solar resources.

But going forward it will be doubling its investments, AfDB’s president said.

“We as a bank had said we are going to double our financing for climate change…so the shareholders strongly supported that direction…They are asking that we do a lot more on climate,” Adesina said.

Tumi Solange Akinloye, political and international relations commentator, told  IPS of the increase, “this simply means that there will be more money for African countries to loan, which will serve to continue carrying out their projects, for the betterment of their people.”

The general capital increase comes ahead of the AfDB’s Africa Investment Forum —  a platform to attract private sector finance.

The forum was launched last year by the Bank and its partners. This year it will take place from Nov. 11 to 13 in South Africa. The forum has been lauded by Africa’s CEOs as changing the investment narrative for Africa.

“I am an optimist on Africa. My optimism does not imply non-awareness of the challenges facing the continent, but stems from a conviction that the best of Africa lies ahead of us,” Adesina said at the North American launch of the forum last year.