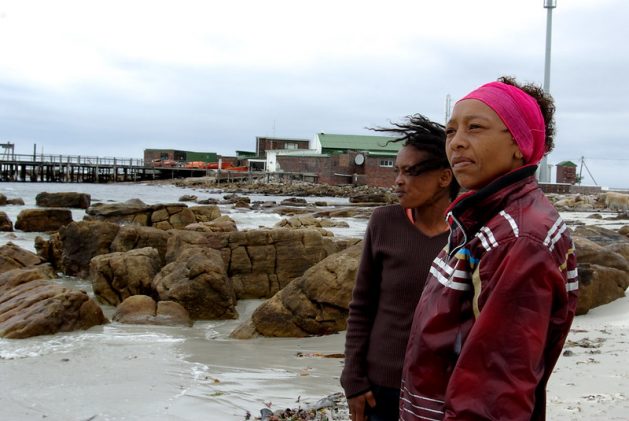 Rita Francke and another fisherwoman at the jetty, in front of the old crayfish factory at Witsands. A gendered perception of the fishing industry remains a challenge for key solutions. Many perceive fishing to be an industry for males, even though women make up almost 50% of the global fisheries labour market.Credit: Lee Middleton/IPS

UNITED NATIONS, Dec 6 2019 (IPS) - Experts gathered in November to discuss the importance of sustainable fisheries and its role in eradicating world hunger at a fisheries symposium in Rome.

At the International Symposium on Fisheries Sustainability organised by the Food and Agriculture Organisation of the United Nations (FAO), they held talks on strengthening policies, and understanding how to ensure that growing nutritional demands are being met while biodiversity is not being negatively impacted.

The report noted that the demand for fish consumption has increased over the past decades — twice faster than the actual population growth, meaning that higher demands needed to be met.

A September U.N. report stated that a bit more than 3 billion people rely on fish for their protein and nutrition — and the demand is only likely to increase with a growth in the world population.

Sustainability of fisheries is intricately linked to food security and climate change, according to reports. More heated up oceans can negatively impact fisheries, and given that billions of people bank on fish for nutrition, especially in certain low-income areas of the world, this in turn affects their food resource.

A September report by Inside Climate News, a non-profit climate change reporting platform, predicted that fish catch potential in some regions are expected to be affected by climate change that will “cause significant resource re-distribution, demanding adaptive management measures to minimise impacts and maximise opportunities.”

“There are many local catastrophe scenarios that impede local fish production, especially in low-income communities that had been highly dependent on fish in their diets,” George Kent,  a researcher who in 1997 predicted how depleting fish sources could affect communities in poverty, told IPS. “That process is already underway. Stories can be found in India and all around the Bay of Bengal, and in African coastal fishing villages. In some cases the “catastrophe” results from outsiders catching fish in waters that had been the basis for local sustenance”.

In small island states, where fish can make up about 50% of animal protein consumed by humans, the results of depleting fisheries can be devastating and lead to malnutrition, experts say.

Furthermore, food insecurity is intricately linked with poverty, and fisheries provide a “safety net” for fishers against poverty, with 97% of fishers living in developing countries, experts say.

But there is an overlooked part of the fisheries industry that can play a vital role in fisheries sustainability.

Meanwhile, a gendered perception of the fishing industry remains a challenge for key solutions. Many perceive fishing to be an industry for males, even though women make up almost 50% of the global fisheries labour market. Their stories — and challenges — often remain untold, and are not taken into consideration when addressing solutions and measures for the industry.

A World Wide Fund for Nature report from 2012 detailed that the challenges of the fishing industry — such as “ lack of land ownership, high degrees of indebtedness, poor access to health, education and financial capital, and political and geographical marginalisation” often disproportionately affect women.

Women tend to be more concerned about food security and sustainability, while male members are more focused on their market goals, experts say. As such, women tend to view their agricultural practices for long-term goals, thus garnering a plethora of knowledge in the field over time which experts say can be referred to for creating initiatives for sustainable agriculture practices.

Women’s reproductive health can also be shaped by their access to fish as a nutrition. Experts say pregnancy for women in some parts of the world can be improved with more fish rich in omega-3 fatty acids. Even though this link isn’t often discussed as a food security concern, experts say it should be.

Furthermore, what often invisibilises women’s work in fisheries is the terminology — traditionally, fishing has been associated with the sole act of going into the sea and physically catching fish, while ignoring women’s preparation work or collecting small fish are not considered fishing, according to a Oceania report.

The Oceania report points out that leaving women out of the conversation doesn’t only affect women’s inclusivity, but is further “critical to understanding the ecological impacts of fishing and developing responsible management plans for global fisheries.”