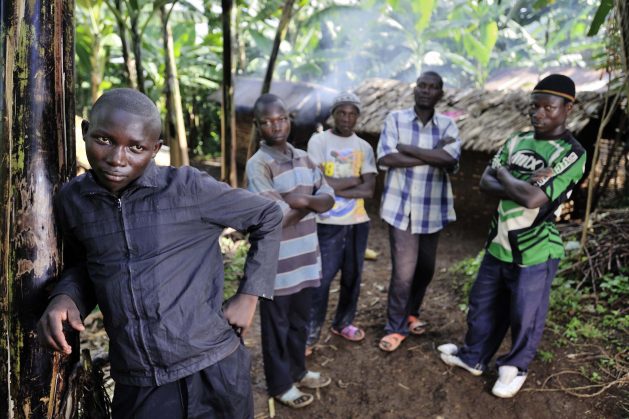 Former child solider Mulume Bujiriri* (front left) from the Democratic Republic of Congo. A new report on Children and Armed Conflict states that children allegedly associated with terrorist organisations should be treated as victims of terrorism, not accomplices and noted that often governments “criminalised” children instead of offering them the proper support. Credit: Einberger/argum/EED/IPS

UNITED NATIONS, Feb 5 2020 (IPS) - Counter-terrorism efforts adopted by governments around the world in response to threats of terrorism are affecting children negatively in numerous ways, a report by Watchlist on Children and Armed Conflict (Watchlist) claimed last week.

The policy note claimed a lot of these counter-terrorism measures “lack adequate safeguards for children” and lose sight of how they’re detrimental to children against the bigger picture of fighting terror threats.

It further listed six ways in which children are affected through counter-terrorism efforts by states: treatment of children alleged to have terrorist affiliations; inability of governments to maintain internationally recognised juvenile justice standards; erosion of “principle of distinction”; being huddled in the definition of “foreign terrorist fighters”; denial of access to humanitarian needs brought upon by measures such as sanctions; and the Screening, Prosecution, Rehabilitation and Reintegration (SPRR) measures being loosely applied.

Children allegedly associated with terrorist organisations should be treated as victims of terrorism, not accomplices, the report read, adding that too often governments instead “criminalise” children without providing them proper support.

“Children have been tortured, subjected to ill-treatment, and unlawfully and/or arbitrarily detained on national security-related charges for their actual or alleged association with these groups,” read the report.

“Children may also be vulnerable to recruitment and exploitation by these armed groups,” Brigid Kennedy Pfister, Senior Child Protection Specialist at United Nations Children’s Fund (UNICEF) told IPS. “From north-east Nigeria to Somalia, Iraq and Syria to Yemen and beyond, children who have been recruited and exploited by armed groups in any kind of conflict are first and foremost victims whose rights have been violated.”

According to a 2019 U.N. report on terrorist exploitation of the youth, children can get recruited by terrorist units for a variety of reasons, such as their location and its proximity to a terrorist group, financial instability, societal perceptions or political marginalisation, and exposure to extremist propaganda — factors children have little control over.

“We know that armed groups use duress, coercion, manipulation and violence to force or persuade children to join them, while some children may have lived in areas controlled by these armed groups have no meaningful choice but to associate with them,” saysPfister.

That is why it’s crucial that children are provided with care instead of further marginalisation if they are preyed upon by terrorist groups.

“All children in these situations, must be treated primarily as victims of human rights violations. Children affected by armed conflict should be supported with evidence-based services that aid their recovery and support their reintegration into communities,” says Pfister of UNICEF, adding that the children should instead be provided support to “reintegrate into their communities and recover.”

Meanwhile, it’s also important to ensure that international laws and procedures are followed in the event that children are detained.

As the Watchlist report claims, special provisions designed for children in the justice system, as dictated by International Humanitarian Law (IHL), must be followed.

Pfister, of UNICEF, agrees. “Detention of children should only be a measure of last resort and for the shortest possible time,” she says. “Children should not be investigated or prosecuted for alleged crimes committed by their family members or for association with designated terrorist groups or other armed groups. Children should be provided with psychosocial services, legal assistance and support to reintegrate into their families and communities.”

While children are vulnerable to falling prey to terrorist ideology or recruiting due to a number of reasons, it’s not that the population is devoid of concerns about terrorism. According to a UNICEF survey conducted across 14 countries in 2017, violence and terrorism are concerns on children’s radars — as issues that they would be impacted by as well as issues their peers will suffer from. The survey included children from the ages of 9 to 18, according to Pfister, who shared the data with IPS.

“Children across all 14 countries surveyed were equally concerned about terrorism with 65 percent of all children surveyed worrying a lot about this issue,” she said.

As such, heavy concerns remain regarding children’s well-being in conflict-prone areas. There are numerous ways in which they can be affected, says Pfister, echoing the findings of the Witness report.

“Children are disproportionately victims of armed conflict, including conflicts with armed groups that target and terrify civilians,” she told IPS. “Children may be caught up in attacks themselves, or lose their parents, family members or caregivers. Their homes, schools or the hospitals and health clinics they rely on may come under attack.”

Currently UNICEF operates in 14 countries providing services to children on their path out of armed forces and armed groups, says Pfister, and working with governments to advocate for children to be identified as victims so that their families receive support to rehabilitate them.