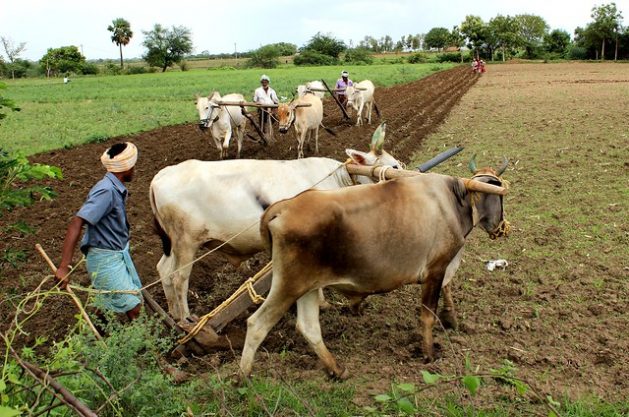 NEW DEHLI, Feb 5 2020 (IPS) - Last June when more than half of India was reeling under daily temperatures topping 40 degrees Celsius, Nursing Behera’s 11-month-old son burned both his legs when a pot of boiling water fell on him.

In their tin shack, for three days the child neither slept nor ate, whimpering in pain.

“It’s a furnace in summer our one-room hut, the table fan only pushes out hotter air. For three days I missed work, sat next to my little boy and wracked my mind how I could bring him a little relief,” Behera, a daily-wage meat cutter in a small chicken and egg outlet in eastern India’s Bhubaneswar city, told IPS.

He then thought to purchase a huge slab of ice – one as big as full-grown man. He wheeled it into the hut, angled the fan over it for a cool breeze and placed his son near it. It was only after this that his son’s burns scabbed up.

The accident, and the extreme heat that made it difficult for the boy to recover quickly, cost Behera. Not only in the wages he lost for not going to work for three days, but also in the costs to purchase and transport the ice. In total it was 15 days wages that had been lost.

But loss in labour productivity due to extreme heat could cost India 2.5 to 4.5 percent of its GDP by 2030 finds a McKinsey Global Institute (MGI) report released in January.

India, like most developing countries, heavily relies on manual labour. As of 2017, heat-exposed work has produced about half of India’s GDP, the report notes. According to World Bank data, India’s GDP stands at $2.719 trillion. In India heat-exposed employment, where workers are exposed to extreme heat or high outdoor temperatures such as in the construction and farming industries, comprises as much as 75 percent of its total labour force.

“By 2050, it is expected that some parts of India will be under such intense heat and humidity duress that working outside would effectively not be viable for almost 30 percent of annual daylight hours,” Mekala Krishnan, senior fellow at MGI and co-author of the report, told IPS.

The trajectory of heatwaves in India has been calamitous. From 44 heatwaves in 1970, the numbers have catapulted to 524 heatwaves in 2017, reducing slightly to 484 in 2018, according to government data.

A 2015 heatwave claimed 2081 lives, the most since 1970. As a result, from that year, heatwaves have been categorised as a national disaster, along with floods, earthquakes and others. As heat and humidity increase, labour productivity in outdoor work will drop because workers will need to take longer and more frequent breaks to avoid heatstroke. Moreover, their bodies will protectively fatigue, in a so-called self-limiting process, to avoid overheating.Credit: Manipadma Jena/IPS

As heat and humidity increase, labour productivity in outdoor work will drop because workers will need to take longer and more frequent breaks to avoid heatstroke. Moreover, their bodies will protectively fatigue, in a so-called self-limiting process, to avoid overheating.

India’s deadly 2015 heatwaves got researchers out in the sun asking outdoor construction workers how the extreme climate was affecting their health and productivity. The study said most workers reported increased tiredness and exhaustion, some suffered dizziness, nausea, loss of appetite, weakness and fainting spells. Still others said exposure to direct solar radiation blurred their vision, also impaired their judgement, made them light-headed in the evening and irritable. Most complained of musculoskeletal pain, which is triggered by loss of body salts from excessive sweating.

However, workers did not report these health issues to supervisors. They perceived these injuries as part of their job or they feared negative consequences from the employer. Leave from work meant lost wages, they told researchers.

“We estimate that the effective number of outdoor daylight hours lost in an average year because of diminished labour productivity would increase by about 15 percent by 2030 compared with today,” Krishnan who leads the McKinsey Global Institute’s research on gender economics, inclusive growth, and economic development, told IPS.

“This adds up equivalent to an additional four weeks of heat-related work stoppage, from 11 am to 4 pm, assuming a 12-hour workday,” she added.

When four weeks of productivity loss per worker is multiplied by the hundreds of thousands outdoor workers in large parts of India, it can add up quickly to hit the GDP.

By 2030 over half of the world’s population will live in hot climates with increasing exposure to potentially dangerous heat conditions according to international organisation Sustainable Energy for All (SEforALL).

India could become one of the world’s first places to experience heatwaves that cross the survivability limit for a healthy person, if no significant decarbonisation or adaptation measures are undertaken, the McKinsey report said.

In many regions, warming has already surpassed 1.5 degrees Celsius above pre-industrial period (1861–1880). Heatwaves already kill an estimated 12,000 people annually across the world, a number the World Health Organization says will grow to 255,000 people per year by 2050 if global warming grows unchecked.

“Long working hours in the hot sun, lack of income and access to cooling and water, often along with poor living conditions are additional stressors,” Jaiswal said.

“Indeed, one of the characteristics of climate risk highlighted in the McKinsey report is its regressive nature. Poorer regions often have climates that are closer to physical thresholds. They rely more on outdoor work and natural capital and may have fewer financial means to adapt quickly,” Krishnan said.

Without sustainable cooling, it will be the developing world that feels the most significant “productivity penalty,” according to Sustainable Energy for All (SE4ALL) — an initiative launched by the United Nations to help achieve universal energy access.

‘In a warming world, cooling is not a luxury. It is an issue of equity,’ SE4ALL holds.

But beyond purely economic loss, there is the ‘social cost of carbon’ climatologists said. Climate crises potentially impact millions of people with knock-on long-term social effects as illustrated by Behera’s case where his family’s health, associated mental trauma played havoc.

India is adapting to extreme heat but not fast enough

India is already acting on several short to medium-term adaptation action. “Through the heat action plans (HAP), more work breaks are provided during peak heat periods, more medical officers are trained to identify extreme heat symptoms, and drinking water is being widely provided in cities by non-profits,” Jaiswal said adding, “most importantly, state and city governments have early warning systems that warn communities ahead of time of upcoming heat events.”

In India, 23 states and over 100 cities are working on heat action plans, led by the government’s National Disaster Management Authority in partnership with the Indian Meteorological Department, NRDC and the Indian Institute of Public Health.

MGI estimates it would cost India up to $110 billion by 2030 to address some of the lethal heat-waves risks, including adequate air conditioning penetration. Capacity and knowledge building, investment in adaptive technology and infrastructure, and supporting the economy’s transition away from outdoor work are some obvious adaptation steps. In 2019,‘India Cooling Action Plan’ – a 20-year policy road map (2018 to 2038) to address the sustainable cooling requirements – was brought in.

On heat health insurance for India’s outdoor workers MGI’s Krishnan told IPS that, “While insurance cannot eliminate the risk from a changing climate, it is a crucial shock absorber to help manage risk. Insurance can help provide system resilience to recover more quickly from disasters and reduce knock-on effects.”

“However, as the climate changes, insurance needs to be further adapted to continue providing resilience and, in some cases, to avoid potentially adding vulnerability to the system,” she added.