Brazil: Low on FSI but Much to Offer the South 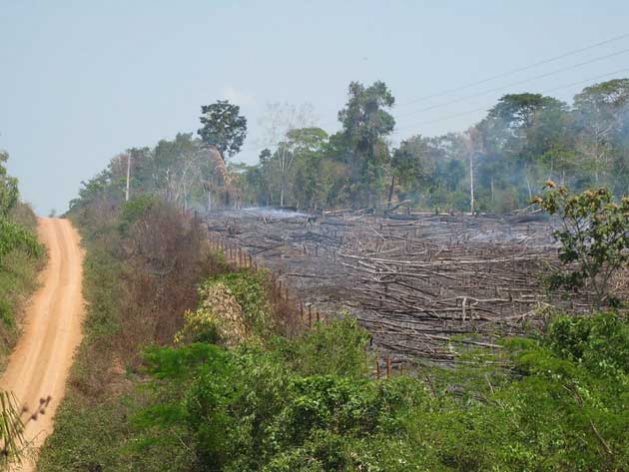 Slash-and-burn clearing in the rainforest in the state of Acre, next to Amazonas. Credit: Mario Osava / IPS

NEW DELHI, Mar 10 2020 (IPS) - Brazil is one of the world’s largest producers and exporters of coffee, sugar, beef, soya, cotton, and ethanol but due to its environmental and water footprint it ranks low on sustainability. Brazilian agriculture’s contribution to the loss of rainforest is a case in point – the Amazon lost as much as 3,465 square miles of forest due to fires last year – triggering widespread international outrage over the lax environment policies that allowed all of this to happen. Its large commercial cattle herd is also a source of greenhouse gas emissions. Brazil’s challenge is to make its model of agricultural development more environment-friendly.

For sustainable agriculture, Brazil has a score of 64.2 — out of a scale of 0 to 100, where 100 represents the greatest progress towards meeting a performance indicator — that gives it a lowly rank of 51 out of 67 countries in the third edition of the Food Sustainability Index (FSI), developed by the Economist Intelligence Unit and the Barilla Center for Food & Nutrition in Italy. In Latin America, Argentina, Mexico and Colombia have higher scores than Brazil. The FSI is based on the three pillars of sustainable agriculture, nutritional challenges and food waste. Being an agricultural powerhouse therefore hardly implies greater sustainability.

Brazil’s agricultural sector grew rapidly – an average of 4.1 percent per annum between 1991 and 2015 — by extending the arable land frontier and through productivity improvements. Net forested area diminished by almost one million hectares between 2010 and 2015 according to the Organisation for Economic Cooperation and Development- Food and Agriculture Organisation of the United Nations’ Agricultural Outlook 2019-28. The sector is dominated by large commercial and export-oriented enterprises. Scale economies contributed to lower production costs and a leading position in global trade. Brazil thus became the world’s third largest exporter of agricultural products, with exports reaching $79.3 billion in 2017. Productivity changes are integrally related to the role of government agricultural research institutions, sometimes through collaboration with the private sector, like the Brazilian Agricultural Research Corporation, EMBRAPA. For sub-level FSI indicators of sustainable agriculture like public support to R&D, Brazil is among the top 5 out of 67 countries. EMBRAPA played a significant role in transforming agriculture in the midwest or Cerrado region by introducing technologies from abroad like nitrogen fixation and no-tillage practices and livestock breeds and adapting them locally to produce more cotton, soybeans, maize and cattle.

As a leading agricultural power, the Brazilian model has lessons for the South, especially for countries relying on small holder farms to feed their growing population. Although large scale agribusiness enterprises dominate, the 4.4 million family farms who occupy less than 25 percent of agricultural land are still important in Brazil, thanks to several institutional measures. Comprehensive family farming programmes provided credit, insurance and marketing support. Family farms also contributed in part to school feeding programmes in the country. From 1999 to 2018, there was also a dedicated Ministry of Agrarian Development for family farmers.

The successful performance of Brazil’s family farms is reflected in the fact that they are responsible for 70 percent of domestic food consumption. They account for 87 percent of cassava, 70 percent of beans, 34 percent of rice and 21 percent of wheat that is consumed in Brazil. Family farms also account for 60 percent of milk and 50 percent of poultry (http://www.brazil.gov.br/about-brazil/news/2018/06/brazilian-family-farmers-are– the-worlds-8th-largest-food-producer). With annual revenues of $55.2 billion, the sector would rank Brazil 8th in the world in food production if the country relied only on family farmers for supply.

For such reasons, Brazil’s agricultural expertise has many takers in the South. Brazil’s president was the chief guest at India’s Republic Day celebrations on January 26 this year. Several agreements were signed during his visit that included collaboration for ethanol production, sharing of best practices in crop and livestock health, deepening cooperation in agriculture research between the Indian Council of Agricultural Research and EMBRAPA, setting up cold chains and terminal markets for fruits and vegetables with state- of-art facilities, among others, according to the India-Brazil joint statement issued during the Brazilian President’s visit.

India is also keen to set up farmer producer organisations that will have collective strength for better access to quality inputs, technology, credit and marketing to improve small farmer incomes in various states. In this regard, it can benefit from the highly successful Microbacias 11 programme in the Brazilian state of Sao Paolo. In fact, couple of years ago, a team from India did visit Sao Paolo to learn from Microbacias 11 to improve the competitiveness of smallholder farmers in the state of Jharkhand as part of a South-South Exchange Programme. The upshot is that while Brazil must respond to climate change imperatives to make its agriculture more sustainable, as a leading global player it obviously has much to offer countries of the South.

(N Chandra Mohan is an economics and business commentator)