For International Women’s Day, IPS UN is featuring female permanent representatives who to share about their work, inspiration and challenges in an otherwise male-dominated field. This profile is part of the series. 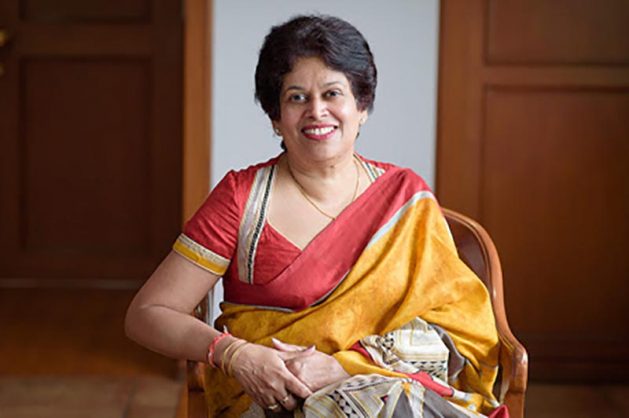 Ambassador Kshenuka Senewiratne from Sri Lanka says much of the parameters around diplomacy are endless because there’s also so many dimensions, especially with the Sustainable Development Goals. Courtesy: Permanent Mission of Sri Lanka to the United Nations

UNITED NATIONS, Mar 6 2020 (IPS) - It’s a rainy February morning in New York, but inside the walls of her room, it might as well be summer — bright and warm, much in contrast to the drizzles reluctantly crawling on the window panes of Ambassador Kshenuka Senewiratne’s office overlooking Manhattan.

Senewiratne, Permanent Representative of Sri Lanka to the United Nations, welcomes IPS with a smile and the world famous Ceylon tea. This is her sixth month here, and she says it has passed by in the blink of an eye.

“Six months in another posting to me would be very new but here the number of permanent representatives that keep coming in after you just pushes you up,” she says with a laugh.

From hamburgers to diplomacy

This is not her first time with the U.N. Between 1988 and 1990, she served as First Secretary in the Permanent Mission to the U.N. in New York. But for Senewiratne, her journey started more than three decades ago as she was walking down the streets in London, where her parents had just moved from Sri Lanka to provide her and her brother with high quality education.

Having just completed her high school board exams from Sri Lanka, she wasn’t sure what was ahead of her.

“I was walking down High Street, and  saw ‘Help Wanted,’” she recalls of a sign she saw at a McDonald’s. So she figured she would give it a try.

Soon after she joined the cafe, she heard back from the University of Salford that she had been accepted into their programme for the next academic year.

She decided to continue working for McDonald’s in order to earn some money until her school began.

“And that was a time when they thought I had some amount of potential and they wanted to send me on training for floor management,” she recalls.

When she declined the offer citing her university admission, they were even more moved by her honesty. They still decided to send her to the training and told her they’d have an open space for her whenever she wanted to return.

She did return once after she joined university. Even though the McDonald’s experience came far before her expansive career in foreign diplomacy — spanning from London to Brussels to Geneva – she still holds her lessons from the McDonald’s store in her work today.

Because of the nature of the work pressure on workers at a fast-food joint such as McDonald’s, Senewiratne says it taught her the importance of being punctual and to think quick on her feet — which she says are key requirements in diplomacy.

“You have to learn everything around the store — from cleaning the toilets to the lobby area, the dining area, [or] how you would put the milkshake machine together — all those technical things,” she says of her time there. “If something happens you must know which button to pull.”

She recalls a particularly funny memory with the milkshake machine where she pulled the wrong button, and was drenched in chocolate syrup. Today, decades later, she laughs as she re-tells the story. But back then, it was a major cog in the wheel of what would become her career.

“That’s where you learnt the essence of time that is inculcated into you,” she says, “whether be it flipping the hamburger, whether it is putting french fries, getting it and bagging it, [or] serving customers — it is all on timing.”

The experience of addressing a crisis situation such as a disappointed customer whose fries were cold, or has something missing in their burger, or doesn’t like their milkshake further taught her to address criticism with calm.

“It’s a case of how you prioritise,” she says, “in diplomacy it’s a situation of prioritising what you need to get done and what you want to achieve.”

Bringing own causes to the world

Her ability to prioritise and negotiate paved the path for her to many governments and international diplomacy efforts. Soon after completing her education, she would go on to become Sri Lanka’s deputy High Commissioner to the United Kingdom, then High Commissioner, then to Geneva as Ambassador and Permanent Representative of Sri Lanka to the United Nations.

In 2014, she was made foreign secretary in Sri Lanka, before she moved back to New York as Permanent Representative. In between, she also served as Ambassador of Sri Lanka to Thailand. She was the only woman in her batch when she joined the foreign service of Sri Lanka in 1984. She was also the first female High Commissioner in London, as well as the first female Permanent Secretary of Foreign Affairs and Permanent Representative to the U.N. in New York.

Her journey is as extensive as it’s glorious but it didn’t come without challenges.

“Especially in my position here I’ve been so idealistic at the beginning,” she says. Often, she would come into the office with a plan to do certain chores in certain order, but once she arrived at work, just by sheer nature of the work itself, that order would be reoriented.

“This is the way it is,” she says, “but that’s something that’s also the challenge of issues and situations and trying to negotiate positions. And it has not been easy in the international arena for Sri Lanka.”

As someone who joined the table while Sri Lanka was still in the middle of its civil war, Senewiratne says sometimes it was difficult to push her country’s issues at the forefront against other international concerns.

But with her persistence, she was able to push forth those stories. Today, she feels at home with the sense of camaraderie she feels with other Permanent Representatives here. There is even an app that brings all the ambassadors together, and another app for female ambassadors.

“Diplomacy is a very interesting field and now the parameters are endless because there’s also so many dimensions, especially with the Sustainable Development Goals being sort of at the end of the rainbow,” she says.

And that, she says, is what makes a career in diplomacy accessible to anyone who wants to work in the field of serving their country, as well as the international community.

At the end of our chat, the New York sky outside remains gloomy.

“The world is a global village in the end and this village is open to anybody,” she says in her message to anyone around the world — perhaps someone in a McDonald’s kitchen who someday hopes to enter the field. “Be a part of the development of your country, and you can go global after that.”