NEW YORK, May 18 2020 (IPS) - It’s an indisputable fact: the United States leads the world in the number of Covid-19 deaths. As of 15 May, three months after the country’s first confirmed coronavirus death, the US death toll from the pandemic has reached a remarkable 88,000 deaths. That rising figure is more than double the number of coronavirus deaths of the next highest country, the United Kingdom at 34,000 deaths.

The pandemic is still in its early stages and many fear the worst is yet to come. Today’s coronavirus mortality picture will no doubt change over time, continuing to evolve and remaining a long-term threat, as the coronavirus spreads death and suffering to populations across the planet.

Among the world’s ten most populous countries, representing 58 per cent of the world’s population, a strong correlation exists between population size and the total number of annual deaths from all causes. 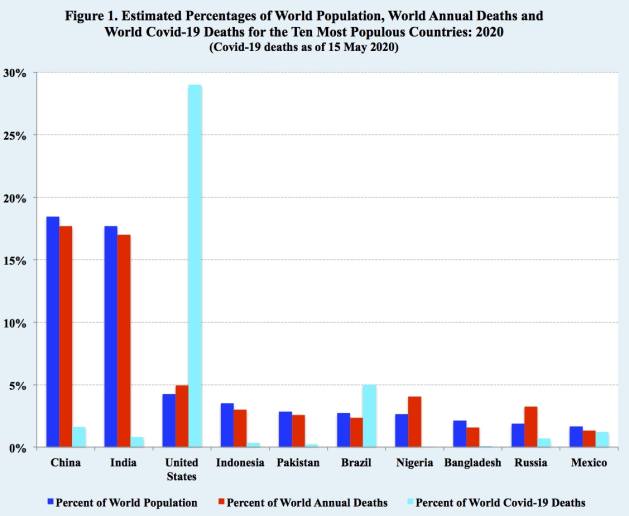 Source: United Nations Population Division for population size and annual numbers of deaths; Worldometer for Covid-19 deaths as of 15 May 2020.

If Covid-19 deaths were distributed proportionate to a country’s share of world total annual deaths, a very different picture would emerge. The United States death toll from the pandemic would plummet to a fraction of its current level, from 88,000 to 15,000 and China’s coronavirus deaths would be many times larger than its current level, from 4,600 to 55,000.

If the coronavirus had first emerged in New York City rather than Wuhan, then perhaps one might expect the United States to have experienced a disproportionate share of all pandemic deaths. However, the virus first appeared in China and that country has a comparatively low number of Covid-19 deaths.

So what then is the likely explanation for why America leads the world in Covid-19 deaths?

The high numbers of American Covid-19 deaths appear basically to be the result of Washington’s peculiar response to the pandemic. That response differs markedly from those of countries that have achieved relatively low numbers and rates of coronavirus deaths

Some observers have chosen to dismiss this question at the outset by discrediting and denying the statistics relating to the pandemic. Those data, they maintain, are unreliable and should be ignored.

Cause of death data, they contend, are flawed with deaths, especially of the elderly, coming from other causes that are often attributed to Covid-19 and at other times Covid-19 deaths are mistakenly attributed to other deaths or missed entirely. Also, they believe that political considerations are greatly influencing the reported numbers of Covid-19 deaths.

The high numbers of American Covid-19 deaths appear basically to be the result of Washington’s peculiar response to the pandemic. That response differs markedly from those of countries that have achieved relatively low numbers and rates of coronavirus deaths.

At the start of the year, the Washington response began by dismissing early warnings, denials of likely trends and eschewing expert advice regarding the expected staggering consequences of a pandemic. It was followed by assurances by the American president that every thing was under control, the country was in far better shape than other countries, claims minimizing the impact of the coronavirus, including it is not as perilous as seasonal flu, predictions of an early resolution and a vaccine by the year’s end.

This initial phase of the White House response was later followed by the politicization of the pandemic and its reported consequences. Health, medical and mortality concerns and recommendations to address the pandemic became highly divisive partisan issues.

The pandemic turned to a political battle of “us vs. them”. Some declared that the pandemic was being used as a new hoax to bludgeon the president.

Angry protests, some armed military-style, and threats of violence erupted across the country against recommended pandemic mitigation guidelines, including shutdowns, shelter-in-place, quarantines, testing, social distancing and face masking. This was further complicated by rising distrust and growing resentment that were worsened by conflicting messages coming out of Washington and many state capitals. 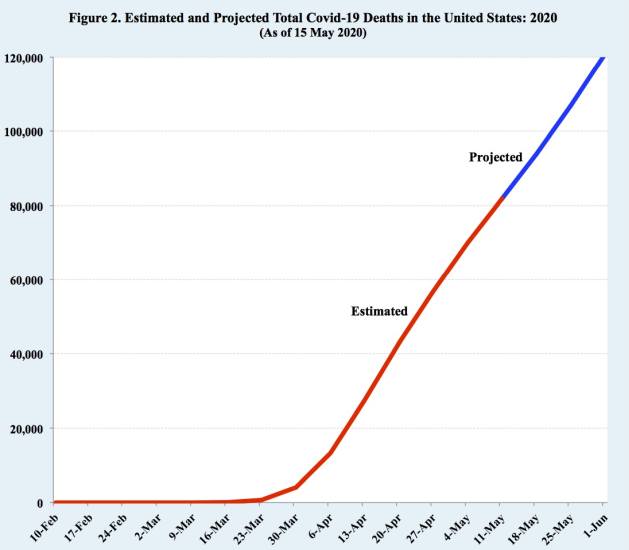 Source: Estimates from Worldometer and projections by author.

Many have called for dramatic and speedy changes in the government’s strategies, programs, health infrastructure, finances, testing, contact tracing, case isolation and surveillance to confront the continuing spread of the coronavirus. In their view, the government’s policies and programs to confront the pandemic, which is considered far from contained, have been plagued by incompetence, callousness, duplicity, disorganization and unpreparedness.

Others consider the calls for changes in strategies and programs as unjustified attacks aimed at undermining the current Administration for purposes of political gain, especially with the presidential election on the horizon. Media and other inquiries questioning the merits of Washington’s response to the pandemic and challenging the president’s claims of achievements and successes are often viewed as nasty and reflections of personal contempt for the country’s head of state.

However, many countries have achieved Covid-19 fatality rates that are a fraction of America’s rate. In Germany and Japan, for example, the Covid-19 death rates per million population are 96 and 6, respectively, versus 268 in the United States. Other countries with low coronavirus death rates include: Australia, Austria, Denmark, Finland, Israel, Hungary, Mexico, Nigeria, Norway, Poland, Singapore and South Korea.

The total number of coronavirus deaths in the United States will soon hit 100,000, eventually exceeding 200,000 and is projected to reach more than 3,000 deaths each day by early June 2020. The American president has said that those numbers of death indicate that the government’s response to the pandemic has been successful and he’s done a good job.

As stated at the outset: America leads the world in Covid-19 deaths. Before continuing to advance unfounded, self-congratulatory claims, especially well before the pandemic’s spread is contained, the government in Washington may wish to review and consider adopting, as appropriate, some of the policies and programs of countries that have been considerably more successful than the United States in reducing the pandemic’s deadly toll.

In doing so, the Administration should rely more heavily on scientific advice and knowledge-based guidance from medical and public health experts as a foundation for the government’s overall pandemic policies. That reliance would greatly contribute to developing a vital strategy needed to avoid a feared calamitous resurgence of coronavirus deaths, suffering and grief in the coming months that would also in turn set back efforts for social and economic recovery.