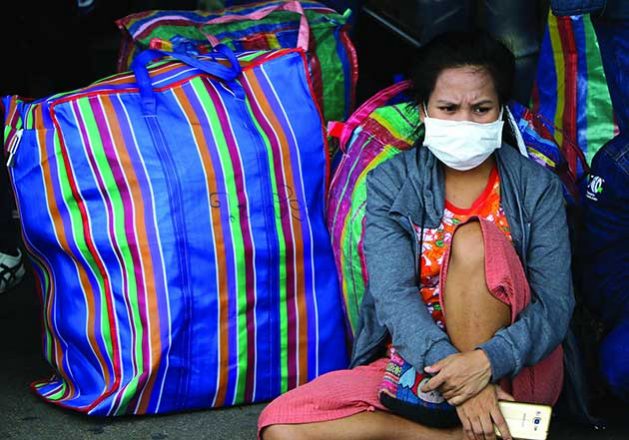 Jun 4 2020 (IPS) - The COVID-19 pandemic is crippling the economies of rich and poor countries alike. Yet for many low-income and fragile states, the economic shock will be magnified by the loss of remittances—money sent home by migrant and guest workers employed in foreign countries.

Remittance flows into low-income and fragile states represent a lifeline that supports households as well as provides much-needed tax revenue. As of 2018, remittance flows to these countries reached $350 billion, surpassing foreign direct investment, portfolio investment, and foreign aid as the single most important source of income from abroad (see Chart 1). A drop in remittance flows is likely to heighten economic, fiscal, and social pressures on governments of these countries already struggling to cope even in normal times. Remittances are private income transfers that are countercyclical—that is, they flow from migrants into their source country when that country is experiencing a macroeconomic shock. In this way, they insure families back home against income shocks, supporting and smoothing their consumption. Remittances also finance trade balances and are a source of tax revenue for governments in these countries that rely on value-added tax, trade, and sales taxes (Abdih and others 2012).

In this pandemic, the downside effect of remittances drying up calls for an all-hands-on-deck response—not just for the sake of the poor countries, but for the rich ones as well. First, the global community must recognize the benefit of keeping migrants where they are, in their host countries, as much as possible. Retaining migrants helps host countries sustain and restart core services in their economies and allows remittances to recipient countries to keep flowing, even if at a much-reduced level. Second, donor countries and international financial institutions must also step in to help migrant-source countries not only fight the pandemic but also cushion the shock of losing these private income flows, just when these low-income and fragile countries need them most. Remittances are income flows that sync the business cycle of many recipient countries with those of sending countries. During good times, this relationship is a win-win, furnishing much-needed labor to fuel the economies of host countries and providing much-needed income to families in the migrants’ home countries. However, this close business cycle linkage between host and recipient countries has a downside risk. Shocks to the economies of migrant-host countries—just the sorts of shocks being caused by the coronavirus pandemic—can be transmitted to those of the remittance-recipient countries. For example, for a recipient country that receives remittances representing at least 10 percent of its annual GDP, a 1 percent decrease in the host country’s output gap (the difference between actual and potential growth) will tend to decrease the recipient country’s output gap by almost 1 percent (Barajas and others 2012). Remittances represent much more than 10 percent of GDP for many countries, led by Tajikistan and Bermuda, at more than 30 percent (see Chart 2).

The pandemic will deliver a blow to remittance flows that may be even worse than during the financial crisis of 2008, and it will come just as poor countries are grappling with the impact of COVID-19 on their own economies. Migrant workers who lose their employment are likely to reduce remittances to their families back home. Recipient countries will lose an important source of income and tax revenue just when they need it most (Abdih and others 2012). In fact, according to the World Bank, remittance flows are expected to drop by about $100 billion in 2020, which represents roughly a 20 percent drop from their 2019 level (see Chart 3). Fiscal and trade balances would be affected, and countries’ ability to finance and service their debt would be reduced. Banks in migrant-source countries rely on remittance inflows as a cheap source of deposit funding since these flows are altruistically motivated. Unfortunately, these banks are now likely to see their cost of operations increase, and their ability to extend credit—whether to the private sector or to finance government deficits—will be greatly reduced (Barajas and others 2018). Furthermore, the typically credit-constrained private sector—mostly comprising self-employed people and small and medium-sized enterprises—is likely to lose remittance funding, in addition to dealing with even tighter credit conditions from banks. All this will come on top of lower demand for their services and products as a result of the crisis.

That’s not all. A prolonged crisis could worsen pressure in labor markets of rich countries, and out-of-work migrants could lose their resident status in host countries and be forced to return home. For example, in Gulf states such as Saudi Arabia and the United Arab Emirates, which rely on migrant labor from the Middle East, North Africa, and Southeast Asia, the drop in the price of oil and economic activity could result in migrants (some of whom are already infected with the virus) returning home. They are likely to join the jobless in their home countries—in labor markets already brimming with unemployed youth—as well as put more pressure on already fragile public health systems. This could heighten social pressure in countries already ill prepared to deal with the pandemic and possibly also fuel spillovers beyond their borders. People escaping tough situations in their own countries are likely to seek other shores, but richer countries, also in the midst of fighting the virus, may have very little desire to allow migrants in—potentially leading to an even greater refugee crisis.

Compared with previous economic crises, this pandemic poses an even greater threat to countries that rely heavily on remittance income. The global nature of this crisis means that not only will recipient countries see remittance flows dry up, they will simultaneously experience outflows of private capital, and maybe a reduction in aid from struggling donors. Typically, when private capital flees a country because of a macroeconomic shock, whether climate related or because of a deterioration in the country’s terms of trade, remittance flows come in to lessen the impact of capital flight. By contrast, in this current crisis, poor countries can expect to experience both phenomena—capital flight as well as a drop in remittance flows.

With global demand likely to suffer, it would be hard for remittance-recipient countries to export their way out of this crisis. Currency depreciation cannot be expected to spur demand for their exports or attract tourism since this shock is systemic (Barajas and others 2010). Currency weakness will likely worsen the economic situation for many of these low-income and fragile states whose debt is in foreign currency, further depressing local demand and resulting in greater shrinkage of local economies.

The crisis has the unique effect of tightening fiscal constraints in low-income migrant-source countries just when there’s much more for the public sector to do, both in terms of protecting the population from the pandemic and supporting local economies in weathering huge negative shocks. The loss of tax revenue resulting from the drop in remittance- supported consumption will only make things worse for governments already strapped for funds and severely strain their ability to engage in countercyclical fiscal measures. This creates tremendous urgency for the international community to help, even when rich countries are themselves facing huge fiscal burdens.

It is in the best interest of rich countries for migrants not to go home as well as to provide resources for poor countries to fight the pandemic. Infection rates are much higher in rich countries and are especially high among migrant workers owing to their dismal working and housing conditions. Migrants who go home are at risk of taking the virus with them. If this happens, poor countries will provide a rich incubator for the virus that will boomerang as refugees seek new shores. Then it will take decades—and many lives—for the world to be rid of this virus.

First, host countries need to stabilize the employment opportunities of the migrant workers in their economies. Relief packages that target employment protection for citizens in rich countries can also help migrant workers remain employed. Recognizing the need to protect and stabilize the welfare of migrant workers, the prime minister of Singapore recently assured migrant workers in his country that “we will look after your health, your welfare, and your livelihood. We will work with your employers to make sure that you get paid and you can send money home . . . This is our duty and responsibility to you and your families.” Action by host countries can help keep the remittance lifeline alive, as well as reduce the likelihood of migrants returning home.

Extending protection to migrants will also help advanced economies get back to full production sooner. If host countries send migrants back, it will take even longer to restore production in rich countries to former levels. In countries such as the United States that depend on seasonal labor, keeping migrants within their borders and enhancing testing for infection will bring a double benefit—ensuring the supply of fresh agricultural products for the host country and preserving remittances for migrants’ home countries.

Second, countries receiving returning migrants will need help to contain, mitigate, and reduce the escalation of outbreaks. Donor countries must help with the cost of virus mitigation, in an effort to lessen the severity of the crisis in local economies and stave off potential spillovers.

Returning migrants are likely to place further stress on the health care systems of migrant-source countries, which are struggling to contain local infections and avoid a shutdown of the local economy. Authorities in these countries will need enhanced testing as much as possible in urban areas, as well as support in implementing quarantine measures for returning migrants who may be infected. If the return of migrants is handled in this manner, there could be longer-term benefits for their home countries as well. Migrants who expect to be permanently repatriated may bring their savings with them, and their work skills could bring development benefits to their home countries.

Third, given that poor countries’ governments have limited room for maneuver, these countries will need the assistance of international financial institutions and the donor community. International financial institutions need to shore up fiscal and balance of payments assistance to these countries. This should include ensuring that these countries’ most vulnerable people—those most reliant on remittance inflows for their consumption and well-being—are able to access social insurance programs. And, perhaps now more than ever, the global effort to meet Sustainable Development Goal 10, reducing the high cost of remittances to 3 percent, could take center stage.

This crisis makes it clear that as a global community we, rich and poor countries, are all in this together. We can either lift all boats or, together, face the consequences of rising social inequality.