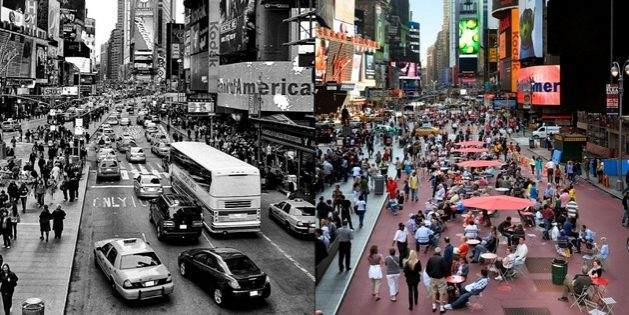 A recreation of how New York's Times Square could be transformed as part of the ideas of reversible urbanism which experts are calling for in the wake of the pandemic. CREDIT: PaisajeTransversal.org

RIO DE JANEIRO, Jun 2 2020 (IPS) - The first priority in the COVID-19 pandemic was to save lives, in an effort to avoid even more devastating economic losses if strict lockdown and isolation were not put in place.

But that priority could be reversed in the wake of the crisis, and lessons that would open up paths for shaping better cities could be discarded.

“The pandemic served to raise awareness of the need to change the urban paradigm,” while at the same time awakening “spontaneous solidarity among networked citizens, many helping neighbours who they previously ignored,” said Carmen Santana, a Chilean city planner who splits her time between Paris and Barcelona, Spain.

Social inequality, already so widespread in Latin America, has been exacerbated now that this region is becoming the epicentre of the pandemic, and is taking its toll in lives.

"…[T]he greatest contagion has more to do with the flow and circulation of people than with density…Cities that attract many people from many countries, with large-scale global circulation, like London, New York and São Paulo, became hotspots for the pandemic." -- Raquel Rolnik

Also pushing up the death toll is the precarious state of health services, and poor nutrition reflected in undernourishment and in obesity, which was found to increase vulnerability to COVID-19.

The question remains as to whether cities, especially the large metropolises that have suffered the most brutal attack by the new coronavirus, will begin to focus their development on human needs or will continue to follow a dynamic dictated by economic interests that have given rise to dysfunctional systems, according to urban planners that IPS interviewed by phone in different cities.

It is too early to predict what urban transformations will arise, because they depend on how long the isolation and social distancing will last, said Nabil Bonduki, a professor at the University of São Paulo School of Architecture and Urbanism (FAU-USP).

If the epidemic loses momentum or is curbed by a vaccine or drugs in the short term, cities will return to normal with their previous contradictions, he said. But if the current rigid measures against gathering in crowded places in public, or in shows or businesses, are maintained, there will be changes that are still unpredictable, he warned.

“A strong increase in virtual activities is already inevitable, such as business meetings, which have proved to be very productive, remote work and distance learning,” the professor said from São Paulo.

Bonduki, who led the development of São Paulo’s Master Plan as a city councilman in 2013-2014, does not believe there will be a rollback in the search for denser cities, with “occupation of urban voids and underutilised areas, and perhaps larger apartments,” to include office space.

In any case, it is the political powers-that-be that will set the course, although strong pressure from society for greater investment in health and poverty reduction can be expected, he predicted.

His colleague at the FAU-USP, Raquel Rolnik, who served as U.N. Special Rapporteur on the Right to Housing from 2008 to 2014, rejects the widespread belief in a correlation between urban density and the spread of coronavirus.

“Super-dense metropolises like Singapore, Hong Kong and Seoul have not suffered a catastrophe, but have had a relatively low number of victims. In New York, the district of Manhattan, which is very dense, had no more deaths than Staten Island, which is less densely populated,” she said. 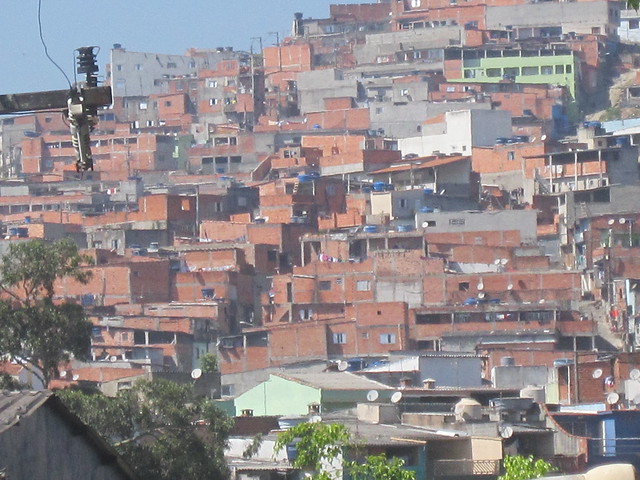 A view of a favela in São Bernardo do Campo, an industrial city near the metropolis of São Paulo in southern Brazil. The idea was that shantytowns in Brazil and other countries of the developing South would be easy prey to the COVID-19 pandemic because of overcrowding, but this has not been the case. There are populous slums in Brazil and other countries that have had few cases .CREDIT: Mario Osava/IPS

She also pointed out that “in São Paulo and Rio de Janeiro, there are favelas (shantytowns) that have seen outbreaks of COVID-19 while others have not” – an argument that can help combat the stigma faced by these overcrowded neighbourhoods.

“In Brazil and around the world, you can see that the greatest contagion has more to do with the flow and circulation of people than with density,” Rolnik said from São Paulo.

“Cities that attract many people from many countries, with large-scale global circulation, like London, New York and São Paulo, became hotspots for the pandemic,” she said. To this list can be added Milan or Madrid, in the two countries that were epicentres of the pandemic in Europe.

The simplification of the issue is in the interest of groups that build, for example, high-end condominiums on the outskirts of cities, which try to tempt potential buyers with the benefits of living away from the crowded city and the possibility of telecommuting, she said.

These are the same financial interests that drive “non-resilient” cities, which accumulate problems such as “increasingly expensive and smaller housing” and air pollution from mushrooming numbers of cars, said Santana, who described herself as having “a Chilean soul, a French spirit and a Catalonian heart.”

“Real estate speculators” try to make a parallel between crowds that fuel contagion and urban density, which can actually be “healthy and sensitive”, with more humans and fewer cars, she said from Barcelona, capital of the region of Catalonia and Spain’s second largest city in terms of population.

Vehicles take up 50 to 60 percent of city space, she said.

Urban issues are complex and their solutions are not to be found in “pyramidal and linear thinking, but in circular thinking,” said Santana, a partner in the company Archikubik, which describes itself as an “ecosystem of architecture, urban planning and urban landscape”. 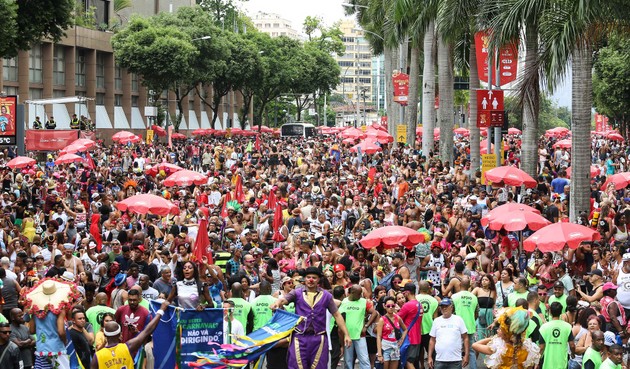 A crowd celebrates during Rio de Janeiro’s last carnival, in one of the last festive gatherings in the world before the coronavirus pandemic. No one knows whether carnival and other mass gatherings will be held in 2021 and the next few years. CREDIT: Fernando Maia | Riotur-Public Photos

Her proposals for redevelopment, which she hopes will be better received in the wake of the pandemic, include green public spaces, productive neighbourhoods that include urban agriculture, places of human dignity with housing and public toilets to serve refugees and the homeless, and the “renaturalisation” of cities.

“Animals reappeared in the cities when the cars stopped moving around, generating a new urban ecology and bringing people closer to nature,” she said.

The pandemic encourages reflection on how to reverse “the physical proximity and social distancing” of many in the city. “What is needed is a reasonable density, dense because of multifunctionality, with housing, work, commerce, recreation, culture, services, all in a local mix,” argued Carlos Moreno, a professor at the University of Paris I Pantheon-Sorbonne.

Moreno, a Colombian-French urbanist and scientist and expert in intelligent cities, technological innovation and complex systems, prefers to describe “reasonable density” as “social intensity” with premises that combine economic, ecological and social dimensions.

We must promote the “urban-human encounter” in which people stop being “socially disconnected digital ghosts,” he said from Paris.

The possible increased use of cars would constitute a “triple blowback”, because they emit pollutants, like nitrogen dioxide and fine particles, which make COVID-19 more lethal. According to several studies, the air inside cars is stale and the vehicle subjects its users to “citizen anonymity,” Moreno said.

The urban space is one of coexistence, that generates bonds, but “the car generates neither economic activity nor social bonds,” reflects selfishness and today does not even represent social status, he asserted.

These are urban issues whose debate should intensify ahead of the 27th World Congress of Architects, which was postponed from this year to Jun. 18-22, 2021, due to the pandemic. It is expected to draw about 15,000 participants in Rio de Janeiro.

Postponing the meeting gives the International Union of Architects more time to organise it and to expand the debates, to include discussions of the effects of coronavirus in cities, said Sergio Magalhães, an architect and urban planner who chairs the Organising Committee.

Rio de Janeiro, named the World Capital of Architecture 2020 by UNESCO (United Nations Educational, Scientific and Cultural Organisation), will showcase its nearly five-century-old historic centre, and the impact of the pandemic in a tourist city.

Brazil will also stand out with cities that are badly treated by local and national governments, according to Magalhães, a professor at the Federal University of Rio de Janeiro who is renowned for his role in the upgrading of some 150 of the city’s favelas in the Favela-Bairro (favela-neighbourhood) project in the 1990s.

Brazilian cities are precarious because 80 percent of the homes were built by private individuals themselves, without any financing or support. From 1950 to 2010 about 60 million urban homes were built this way in the country, a popular feat.

Another 40 million will be built by 2030, although the population of the country will barely grow, because the birth rate has declined and families are shrinking, Magalhães explained.

One major problem is urban sprawl, with low density areas that make sanitation and urban services difficult to deliver. The area covered by Rio de Janeiro has grown three times more than the population since 1960, he said.