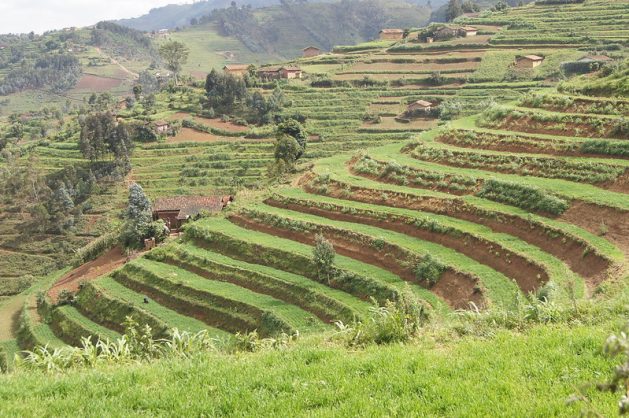 Rwanda may be a small country of some 12 million people, but its membership in the East African Community provides it with a market of some 100 million. Credit: Aimable Twahirwa/IPS

In a virtual discussion, the director of operations at the Private Sector Federation (PSF) of Rwanda, Yosam Kiiza, said Rwanda’s strength lies with its membership with the East African Community (EAC). The EAC is composed of five countries and has a population of over 100 million people.

“This means that investing in Rwanda is an opportunity to export to the rest of the other member countries as well as the Great Lakes Region,” he said.

Rwanda also shares a border with the Democratic Republic of the Congo (DRC) whose population is 80 million. Although the DRC is not yet a member of the EAC, it provides a vast market for its smaller neighbour, Rwanda, which has a population of 12 million.

Two webinars, organised by the Global Green Growth Institute (GGGI) in partnership with Rwanda Environment Management Authority (REMA) as part of an agreement between the Italian and Rwandan ministries of environment, were held this month. The online discussions were aimed at facilitating green technology transfer and creating partnerships between companies from Italy and Rwanda.

Kiiza was speaking during the Jun. 10 webinar that targeted major stakeholders, such as institutions, entrepreneurs, investors, developers etc., who have a key role in the green growth and sustainable development of their country’s economy in both Italy and Rwanda.

Through its transformation to low carbon development and green growth, Rwanda is a minefield of opportunities. The first webinar was held on Jun. 03.

Meanwhile, Kiiza said the PSF is keen on investments that will deliver green growth solutions primarily in public health, air quality, and environmental restoration as well as creating sustainable jobs in tourism, transport, agriculture and manufacturing.

“The Italian business community is ready for the challenge,” the President of the Small Industry of Assolombarda, Alessandro Enginoli, said. A study tour of 30 Italian companies – he continued — was planned for March. The tour, organised in cooperation with GGGI and the Italian Trade Agency, was cancelled because of travel bans implemented by both governments to curb the spread of COVID-19. However, said Enginoli, “I’m confident we can do it again as soon as possible, probably in October.”

He said the dialogue between the two federations, Assolombarda and PSF, started a year ago when he first visited Rwanda. Assolombarda is the regional private sector association from Lombardia Region and a member of the National Private Sector Federation, Confidustria. It is the largest industrial association in Italy, representing 7,500 companies. The Small Industries represents 4,500 companies with a turnover of about €32 billion.

“Italy is known for its high concentration of small and medium companies,” he said, adding: “This model is perfect for African needs. The Italian business model is a win-win model that creates local development and job creation.”

Absolute Energy, an independent investment platform focused on renewable energy, is already pursuing a path of affordable energy in Rwanda. According to Absolute Energy chief executive officer, Alberto Pisanti, energy is a means to development. He said considering that agriculture is more developed compared to other countries, closing the gap between the sector, water and energy is the way to go.

Pisanti highlighted the gaps in agriculture such as the fact that 70 percent of farm work in Africa is done manually, 90 percent has no artificial irrigation and that the continent has 50 percent of global uncultivated arable land and imports 66 percent of the food it consumes.

“There’s a lot to do. Clearly you need machinery, transformation, reduce waste and work as much as possible locally to avoid people migrating to the cities thus abandoning rural areas,” said Pisanti.

He said it was for that reason that his company believes in rural electrification and decentralized generation is key especially in countries like Rwanda. But there are challenges, he said, adding that doing a business in a village that is too small may not be viable.

Also sharing his experiences of running a business in Rwanda was Giovanni Davite, co-owner and executive director of Kipharma, a business started by his father in 1969. It now has a turnover of €12 million. He described Rwanda as a stable yet fast-growing country whose leadership has a strong vision. He warned though that it requires patience.

“If you’re in business to do a quick buck, Rwanda is not for you,” he said.

Other industries that made presentations include agriculture, ecotourism, wood, construction and textile. Representations were also made by by Daniele Kihlgren, President of Group Sextantio-DOM, which focuses on sustainable tourism and Vicky Murabukirwa, a senior partner from construction company Duval Great Lakes Ltd.

Diane Mukasahaha, the chairperson for the Apparel Manufacturing Group (AMG), said she was grateful that the Government of Rwanda banned the import of second-hand clothing because this has created an opportunity for the local industry. She said this industry creates a lot of jobs.

Italian Ambassador to Uganda, Rwanda and Burundi, Massimiliano Mazzanti, was pleased that the Embassy was involved in this initiative and encouraged entrepreneurs who want to start their business in Rwanda to avail themselves of the support of the Italian Embassy.

According to Claudia Beretta, who works on a project that is focusing on private sector engagement with GGGI, the Government of Rwanda does not leave out the word ‘green’ when talking about development. Responding to a question from IPS, Beretta said the airport is a good example of linking development to sustainability.

“It’s the biggest infrastructure project and the objective of the government is to have the greenest airport in Africa,” she said.

She said GGGI, an international organisation that assists countries develop inclusive and sustainable economic growth, is working closely with the government to make this vision a reality.  Beretta added that other opportunities exist in the renewable energy sector which can contribute towards reducing post-harvest losses. She said rural electrification through renewable energy could help farmers with refrigeration systems that would keep produce fresh until it reaches the market.

“The majority of the population is using charcoal and wood to cook and this is a big problem for the environment and health of the population. The government is working towards supporting new technologies and alternative fuels such as LPG,” she said.

Beretta noted that this is a challenge considering that buying power for rural communities is low although this could be overcome through business models that offer affordable energy.