Print |
A record 53.6 million tonnes (Mt) of e-waste was produced globally in 2019,
the weight of 350 cruise ships the size of the Queen Mary 2;
$57 billion in gold and other components discarded - mostly dumped or burned 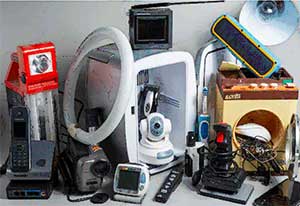 Only 17.4 per cent of 2019’s e-waste was collected and recycled. This means that gold, silver, copper, platinum and other high-value, recoverable materials conservatively valued at US $57 billion — a sum greater than the Gross Domestic Product of most countries – were mostly dumped or burned rather than being collected for treatment and reuse. 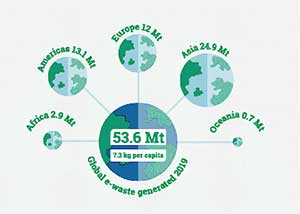 For perspective, last year’s e-waste weighed substantially more than all the adults in Europe, or as much as 350 cruise ships the size of the Queen Mary 2, enough to form a line 125 km long.

E-waste is a health and environmental hazard, containing toxic additives or hazardous substances such as mercury, which damages the human brain and / or coordination system.

Other key findings from the Global E-waste Monitor 2020:

• Proper e-waste management can help mitigate global warming. In 2019, an estimated 98 Mt of CO2-equivalents were released into the atmosphere from discarded fridges and air-conditioners, contributing roughly 0.3 per cent of global greenhouse gas emissions
• In per capita terms, last year’s discarded e-waste averaged 7.3 kg for every man, woman and child on Earth
• Europe ranked first worldwide in terms of e-waste generation per capita with 16.2 kg per capita. Oceania came second (16.1 kg) followed by the Americas (13.3 kg). Asia and Africa were much lower: 5.6 and 2.5 kg respectively
• E-waste is a health and environmental hazard, containing toxic additives or hazardous substances such as mercury, which damages the human brain and / or coordination system. An estimated 50 tonnes of mercury – used in monitors, PCBs and fluorescent and energy-saving light sources – are contained in undocumented flows of e-waste annually
• E-waste in 2019 was mainly comprised of small equipment (17.4 Mt), large equipment (13.1 Mt), and temperature exchange equipment (10.8 Mt). Screens and monitors, lamps, small IT, and telecommunication equipment represented 6.7 Mt, 4.7 Mt, and 0.9 Mt respectively
• Since 2014 the e-waste categories increasing fastest in total weight terms: temperature exchange equipment (+7 per cent), large equipment (+5 per cent), lamps and small equipment (+4 per cent). According to the report, this trend is driven by the growing consumption of those products in lower income countries, where those products improve the living standards. Small IT and telecommunication equipment have been growing more slowly, and screens and monitors have shown a slight decrease (-1 per cent), explained largely by lighter flat panel displays replacing heavy CRT monitors and screens 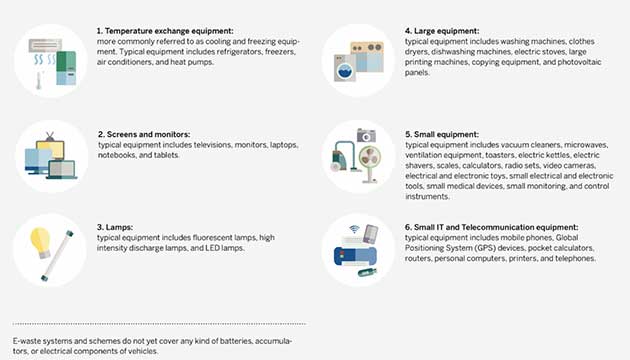 • Since 2014, the number of countries that have adopted a national e-waste policy, legislation or regulation in place has increased from 61 to 78. While a positive trend, this is far from the target set by the International Telecommunication Union which is to raise the percentage of countries with an e-waste legislation to 50 per cent 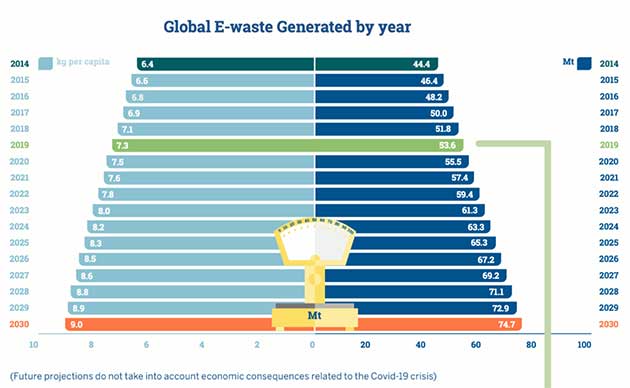 The Global E-waste Monitor 2020 (www.globalewaste.org) is a collaborative product of the Global E-waste Statistics Partnership (GESP), formed by UN University (UNU), the International Telecommunication Union (ITU), and the International Solid Waste Association (ISWA), in close collaboration with the UN Environment Programme (UNEP). The World Health Organization (WHO) and the German Ministry of Economic Cooperation and Development (BMZ) also substantially contributed to this year’s Global E-waste Monitor 2020.

“The findings of this year’s UNU-affiliated Global E-waste Monitor suggest that humanity is not sufficiently implementing the SDGs. Substantially greater efforts are urgently required to ensure smarter and more sustainable global production, consumption, and disposal of electrical and electronic equipment. This report contributes mightily to the sense of urgency in turning around this dangerous global pattern.”
– David M. Malone, Rector United Nations University (UNU) & UN Under Secretary General

“Far more electronic waste is generated than is being safely recycled in most parts of the world. More cooperative efforts are required to make aware of this increasing issue and take appropriate countermeasures supplement by appropriate research and training. I am pleased that UNITAR now joins this important Global E-waste Statistics Partnership of UNU, ITU and ISWA, illustrating how valuable these activities are.”
– Nikhil Seth, Executive Director, United Nations Institute for Training and Research (UNITAR) & UN Assistant Secretary-General

”The Global E-waste Monitor highlights the pressing issue of e-waste management in today’s digitally connected world in that the way we produce, consume, and dispose of electronic devices has become unsustainable. Monitoring e-waste streams will contribute to the achievement of the Sustainable Development Goals and tracking the implementation of the ITU Connect 2030 Agenda. The Monitor serves as a valuable resource for governments to improve their global e-waste recycling rate by developing the necessary/needed/required e-waste policies and legislation. ITU will continue to support the efforts made in this report towards the global response required in identifying solutions for e-waste.”
– Doreen Bogdan-Martin, Director, Telecommunication Development Bureau, International Telecommunication Union (ITU)

“E-waste quantities are rising 3 times faster than the world’s population and 13 per cent faster than the world’s GDP during the last five years. This sharp rise creates substantial environmental and health pressures and demonstrates the urgency to combine the fourth industrial revolution with circular economy. The fourth industrial revolution either will advance a new circular economy approach for our economies or it will stimulate further resource depletion and new pollution waves. The progress achieved in e-waste monitoring by the Global E-waste Statistics Partnership is a sign of hope that the world can manage not only to monitor closely the e-waste rise but also to control their impacts and set up proper management schemes”
– Antonis Mavropoulos, President, International Solid Waste Association (ISWA)

“Informal and improper e-waste recycling is a major emerging hazard silently affecting our health and that of future generations. One in four children are dying from avoidable environmental exposures. One in four children could be saved, if we take action to protect their health and ensure a safe environment. WHO is pleased to join forces in this new Global E-waste Monitor to allow evidence, information about health impacts and joint solutions and policies to be made available to protect our future generations’ health.”
– Maria Neira, Director, Environment, Climate Change and Health Department, World Health Organization (WHO)