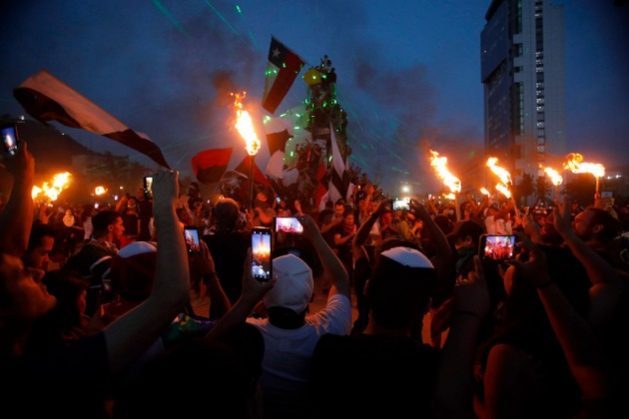 The confinement policies put in place to address COVID have discouraged mass political gatherings, but the factors that drove the social unrest of 2019 remain and, in many ways, have been exacerbated by the COVID pandemic. Credit: Carlos Vera.

Aug 7 2020 (IPS) - While COVID-19 continues to wreak havoc across Latin America, its governments are developing policies which they hope will provide for a rapid economic recovery when the pandemic wanes.

In doing so, they will need to address the aspirations of the region’s growing middle and working classes — otherwise Latin America faces the prospect when it eventually emerges from the COVID crisis that widespread social unrest will undermine efforts to revitalize the economy.

From 2000 through 2014, Latin America significantly reduced poverty and created a vibrant middle class. These gains were fueled in large part by a natural resources export boon that generated a healthy 3.2% average annual growth rate (even after accounting for the financial crisis of 2008).

Equally important, many countries saw the consolidation of democratic regimes and the adoption of policies that produced important gains for many outside of the established elites. 77 million people rose out of poverty during this period and by 2010, the middle class exceeded the number of poor for the first time in the region’s history.

With this growing affluence, a new “citizenry” emerged, made up of the region’s expanding middle-class together with poorer working-class families, many of whom had risen out of poverty and struggled to maintain their position (the “strugglers”).

Buoyed by economic and social gains, this citizenry looked forward to a better life marked by affordable transportation, more household appliances and consumer goods, improved healthcare, access to higher quality education for their children, and the prospect of increasing incomes and strengthened pensions.

By the end of 2014, Latin America’s economic fortunes had started to turn as the natural resources boon dissipated.  The price of minerals and other resource exports plummeted by 40% by 2016, which engendered an acute decline in the region’s annual growth rate to below 0.5% during the next four years . In the face of hardening fiscal constraints, governments began to reduce social and other benefits.

These changes, however, were taking place in a context of an increasingly vocal and confident citizenry that had emerged from the earlier period of economic gains and resulting societal shifts.

From Colombia to Chile to Ecuador and elsewhere, middle-income countries faced civil unrest in 2019 as the citizenry went out massively to protest in the streets against unmet expectations, economic dissatisfaction, inequality, discrimination and corruption.

Governments across LAC needed to address and adjust to this increasingly active citizenry, as epitomized by the Chilean government’s decision to move COP 25 to Spain in the face of widespread civil unrest in Santiago.

In March 2020, the COVID-19 pandemic burst upon Latin America, causing enormous economic and social damage. The IMF has projected that the region could see a 9% drop in output this year, potentially leading to the loss of more than 30 million jobs and the disappearance of well over 2 million of the region’s companies.

This crisis is pushing households out of the middle class and driving many strugglers back into poverty. The World Bank estimates that the number of poor people could increase by up to 23 million, taking the total number of people living in poverty in the region to more than 170 million.

Latin America will eventually emerge from the COVID-19 nightmare but will do so in a changed world presenting important challenges. The region’s governments are presently developing policies to revitalize economic growth, but are constrained by fiscal and other limitations that already were hampering their economies leading into the COVID crisis.

Moreover, many of Latin America’s trading partners are revisiting their reliance on global value chains, which may lower the demand for the natural resources that had helped to power the region’s economic growth.

Of particular significance, Latin America will need to address these macro-economic issues in a political and social context that continues to be marked by the forces that drove the civil unrest of 2019.  The confinement policies put in place to address COVID have discouraged mass political gatherings, but the factors that drove the social unrest of 2019 remain and, in many ways, have been exacerbated by the COVID pandemic.

Although the aspirations of the citizenry have arguably been somewhat obscured by the COVID crisis, they persist, as does the political and societal weight of this group.

To provide for an effective and sustainable outcome, Latin America must restart its economies in a manner that meets the needs of the region’s citizenry.

This requires a policy framework which: (i) promotes equitable and inclusive growth, ensuring that policies meet the needs of the citizenry and not simply the interests of entrenched elites; (ii) strengthens the quality and responsiveness of public sector institutions and services, notably by improving their accountability and technical capacities; and (iii) enhances the business environment for the private sector so as to transform the region into an attractive pole for both domestic and foreign investment.

The governments should also work to effect real regional economic integration which is severely lacking by promoting a collaborative rather than protectionist approach that provides for equitable exchanges amongst countries.

As Latin America looks to emerge from COVID, much of the policy discourse will be about regenerating the economic growth that is indispensable to increasing prosperity.  Yet, hidden behind the pandemic of 2020 are the events of 2019 that point to the ongoing risk of widespread civil unrest and societal disruptions.

While 2020 has reminded Latin America (and the world) that plagues are not confined to history books, it is similarly important not to forget the lessons of 2019.  Latin America has seen the emergence of a growing and empowered citizenry whose aspirations must be addressed if the region hopes to produce significant and sustained economic and social advancements.

Ricardo Raineri is former Minister of Energy of Chile and past President of the International Association for Energy Economics, and is currently a Professor of Economics at Pontificia Universidad Católica de Chile.

Philippe Benoit is a former Energy Sector Manager for Latin America at the World Bank and is currently a Senior Fellow with The Breakthrough Institute.

The views expressed are those of the authors in their personal capacities.