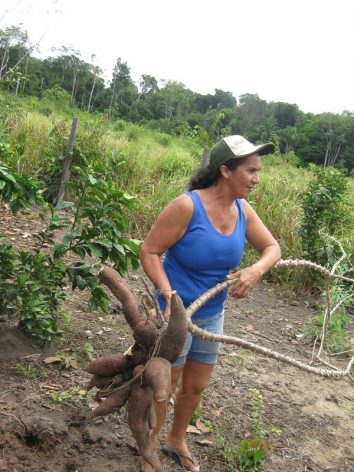 Family farming is a “critical sector” for Latin American and the Caribbean (LAC), with approximately 16.5 million farm holdings across the region. Credit: Mario Osava/IPS

UNITED NATIONS, Aug 17 2020 (IPS) - With limited transport options to carry their goods to the market, lack of protective gear, and limited financial resources, family farmers across Latin America are facing grave consequences as a result of the COVID-19 pandemic.

According to a survey carried out by the Inter-American Institute for Cooperation on Agriculture (IICA) with 118 family farming specialists — defined as professionals with high levels of knowledge in the agricultural sector in general and family agriculture in particular — across 29 countries, many of the respondents said they were already facing the brunt of the COVID-19 pandemic.

Family farming is a “critical sector” for Latin American and the Caribbean (LAC), according to the IICA report, with approximately 16.5 million farm holdings across the region.

Mario Léon, manager of IICA’s Territorial Development and Family Agriculture Programme, at the headquarters in San José, Costa Rica, told IPS that 80 percent of LAC’s production units are family farming units, with 56 percent of them being in South America and 35 percent in Mexico and Central America. These holdings account for between 30 to 40 percent of the agricultural GDP of the region. Given the pervasive fear among customers of contracting the coronavirus, it’s farmers who are suffering: with difficulty in  selling their products and being able to carry them to the market.

“However, it is possible that the most dangerous food shortages may occur in those regions and countries that are net food importers, particularly among the most vulnerable sectors of the population (the poor and indigent),” Léon told IPS.

Full excerpt of the interview below:

Inter Press Service (IPS): Throughout the survey, it consistently appears that “restrictions on travel and movement” is a key factor affecting the family farmers. What role does traveling and commuting play in business for them?

Mario Léon (ML): Many LAC regions with FF communities are far removed from urban centres and have an inadequate road network, which creates logistical costs and increases the prices at which goods are ultimately sold. When transportation is restricted, they cannot receive production inputs or even those food products that may not always be produced or available in rural communities, such as noodles, sugar, oils, cleaning or personal care items, medicine, etc. If production inputs do not reach communities, agricultural activities cannot continue. Similarly, during the harvest, if transportation is restricted, products cannot be distributed and since storage, silos and refrigeration facilities are not always available, the produce is wasted. This is partially due to a lack of organisation and the inability to access proper transportation for distribution.

IPS: How has the restriction of movement affected family farming?

ML: Measures taken to curtail the pandemic, such as restricted movement, has affected family farming in various ways. On the demand side, it has caused the temporary closure of outlets and services, including food stores, which has led to a contraction in the food demand, which in turn has forced prices downward and has made it difficult for some producers to place their products on the market. Consumers have also reduced their visits to traditional markets, out of fear of contracting the virus.

On the supply side, given that family farming  production activities are not usually labour intensive and that most of its production processes have always been done without the need for close physical contact, the effect of the pandemic on this aspect is thought to have been minimal, for now. The limitations it faces, therefore, relate more to services to transport agricultural products to markets and the restrictions on vehicular movement in the countries.

IPS: Is the current crisis affecting any marginalised groups within family farming differently: such as women or indigenous communities?

Yes. Women play a leading role not only in the home but also in the production and selling of food. They are the ones normally involved in short circuit trade and in the selling of products, allowing the family to generate an income. They manage the household and complement the efforts of the production unit. In many countries, women are responsible for horticulture production, the growing of medicinal plants and the rearing of small animals.

Women are also involved in processing family farming  production, via small scale agro-industry. When sales outlets are temporarily closed or restricted, this limits their options and affects them directly. The situation is more complex in indigenous communities. Distance, the lack of communication media or outlets to sell their craftwork is aggravated by social confinement and makes their situation worse.

IPS: In what ways do you believe these groups have been affected?

ML: Although the survey did not conduct an in-depth assessment of how these marginalised groups have been affected, one would expect that they have and perhaps more, given that the demand for food has been decreasing, creating increased competition among producers to access markets. Producers who are more equipped and have more linkages to trade channels have been able to access markets, causing marginalised groups to be displaced and their income to be reduced. Social distancing measures have also exacerbated the effects of the pandemic on marginalised groups that, even before the crisis, had limited access to production services and markets, which is a situation that has now been further aggravated by their limited digital education. This has affected their capacity to promote their business undertakings during the pandemic.

ML: Local markets, including collection and supply centres as well as retail markets, are the primary destination for family farming products in Latin America. Most producer organisations are of an informal nature and lack any kind of legal status; therefore, they are unable to enter into commitments relating, among other things, to the purchase of vehicles to transport their products to markets. As a result, their market access is dependent on intermediaries, namely transporters who collect products and then transport them to sales centres, reducing profit margins for producers. Some family farmers do have their own transport services, either because they form part of an association or, in just a few cases, because they are able to generate enough income to purchase their own vehicles; however, the vast majority of farmers rely on intermediaries. Quarantine measures have reduced the availability of transport services. Additionally, due to a lack of sanitary protocols, entire crews of truckers at several companies have fallen ill with the virus, which has hindered the transportation of products.

IPS: The survey says, “this relationship between producers and intermediaries was most affected in zones in which associative enterprises had been weakened the most, thereby limiting the negotiating power of family farmers.” What factors lead to this reduced negotiating power for them?

ML: Because marketing processes via producer organisations have come to a standstill, farmers have undertaken individual efforts to sell their products at the prices offered by intermediaries. Collective marketing has been affected by reduced product volumes and the absence of contracts and/or agreements that foster social cohesion within producer organisations, which were already weak.