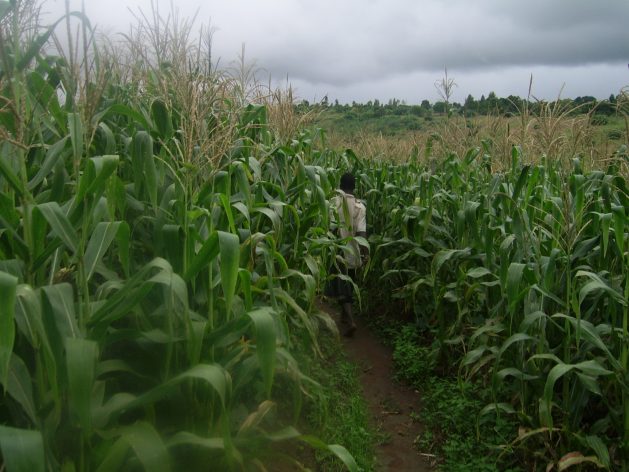 The rural-urban migration of youth household members is leading to loss of labour for agricultural production which was not compensated by hired labour. Courtesy: Charles Mpaka

CHIRADZULU DISTRICT/BLANTYRE, Malawi, Aug 12 2020 (IPS) - As households in Chiradzulu District in Southern Malawi start preparing their farms for the next maize growing season, Frederick Yohane, 24, is a busy young man.

Every morning, he works with his two brothers in their family field where they grow maize and pigeon peas. In the afternoon, he tills other people’s farms to raise money for his needs and to support his family.

Twice a week he cycles to nearby markets to sell the chickens that he buys from surrounding villages.

This has been his life since he was 16 when his father suffered a stroke, which paralysed his left leg and arm. Yohane finished secondary school in 2014, two years after his father fell ill. But he did not pass the final examinations.

Without a school-leaving certificate, he followed the route of many youths in this rural district who trek to Blantyre, Malawi’s commercial capital, to look for menial jobs, mainly as assistants in Asian shops or as street vendors.

“Through a friend, I found work in a hardware shop owned by an Indian. But the money was not good compared with what I was getting in the village. So, I just worked for two months and I returned to the village,” he tells IPS.

Yohane is not planning to return to town again to look for a job. He believes he can make more money in the village if he works harder.

“Besides, I am the eldest child. My father can no longer work. My mother spends much of her time looking after our father. It’s the three of us working in the field,” he says.

Yohane’s family is one of the millions in Malawi which relies on family labour for their farms.  The Food and Agricultural Organisation of the United Nations (FAO) says in its Small Family Farms Country Factsheet for Malawi that farmers account for 80 percent of the total population of 17.5 million in Malawi. Out of that population of farmers, around 75 percent are small family farms that depend on family labour.

However, like the rest of Africa, Malawi suffers a high rate of rural-urban migration, mostly by youths seeking a better life in towns.

When youths, who make up the majority of Malawi’s population, migrate to urban centres, the productivity of family labour farms declines, according to findings of a study commissioned by the International Institute of Tropical Agriculture (IITA) in Malawi in 2018 under its Enhancing Capacity to Apply Research Evidence (CARE) in Policy for Youth Engagement in Agribusiness and Rural Economic Activities in Africa.

Under the CARE programme, IITA is working with young researchers across Africa to promote understanding of the impact of poverty reduction and employment and factors that influence youth engagement in agribusiness and rural farm and non-farm economy, Timilehin Osunde, communications officer for the International Fund for Agricultural Development (IFAD)-CARE Project at the IITA in Nigeria, tells IPS.

In the Malawi CARE study, researcher Emmanuel Tolani interviewed households in two districts of Zomba and Lilongwe. Both districts are known for their high production of maize, Malawi’s staple crop.

The CARE study focused on households where youth had migrated to urban centres in comparison with those where youths had not moved.

In a resulting Policy Brief titled “Youth on the Move: Welfare effects on originating households”, the research found that households, which have youths migrating to urban centres, were each producing 13 50-kilogramme bags less than they could harvest if the youth did not move out.

“This can be [attributed] to the fact that migration of youth household members was leading to loss of labour for agricultural production which was not compensated by hired labour using the remittances received,” reads the brief.

In the brief, Tolani recommends the introduction of income-generating activities among rural households to reduce the need for households to look for other means of diversifying their incomes, such as encouraging the migration of youths.

IITA’s Osunde adds that the lack of an environment suitable for agribusiness, the search for educational opportunities and access to services and resources are among the factors for the trend of rural youths leaving their homes for urban centres in Africa.

Over the years, Malawi has designed and implemented programmes aimed at improving social and economic conditions of rural areas, which could reduce rural-urban migration in Malawi.

However, rural-urban migration has not abated. Malawi’s National Planning Commission attributes this to what it says are “policy implementation inconsistencies across political regimes”.

This argument has featured highly in development discourse in Malawi such that it motivated the establishment of the National Planning Commission. Established through an Act of Parliament in 2017, the Commission’s mandate is to ensure continuity of development policies across political administrations.

On the other hand, Osunde observes that a lot of rural development programmes in Africa have failed because they are designed by policy makers without the input of the rural youth.

“These are often implemented with an up-bottom approach instead of using a bottom-up approach,” Osunde tells IPS.

To support African governments in stemming the tide of youth rural-urban migration, IITA is implementing a number of agriculture-specific programmes, besides CARE.

For instance, the Start Them Early Programme (STEP) aims at changing the mindset of young people in primary and secondary schools by providing them with basic understanding in agriculture to direct them toward agriculture-related careers, says Osunde.

“[The programme] helps to create a conducive business environment by advancing youth-led policies and provides a communication network that delivers much-needed agricultural information to other youths involved in agribusiness,” Osunde says.

In addition, the IITA Youth Agripreneurs aims to change perceptions of youths in Africa about agriculture and see that agriculture can be exciting and economically rewarding.

“With agriculture in Africa largely suffering from negative perceptions amongst youths due to the drudgery involved, insufficient financial gains and a dearth in basic infrastructure, the youth programme being implemented by IITA is aimed at changing the perception among youths in Africa while creating resources that can enable them start out as agripreneurs on the continent. These are agriculture-specific programmes that Malawi can adopt to attract youths into agribusiness,” Osunde tells IPS.

Director General for the National Planning Commission, Dr Thomas Munthali, says they are currently mapping the country into potential investment zones with bankable investment projects which, among others, could lead to the reduction of youth migration.

“The idea is to create secondary cities in such zones based on their arable land, mining and tourism potential. These will be created into industrial hubs offering sustainable decent jobs and socio-economic amenities just like in cities,” says Munthali.

As rural youths in Malawi wait for such programmes, Yohane has already decided to stay in the village. And he is dreaming big.

“We harvest enough maize for our food. But we need to make money. So we are planning to rent another piece of land this year where we can grow more maize for sale. We won’t need hired labour. In future, we want to see if we can buy more land on which we can do serious commercial farming,” he says.