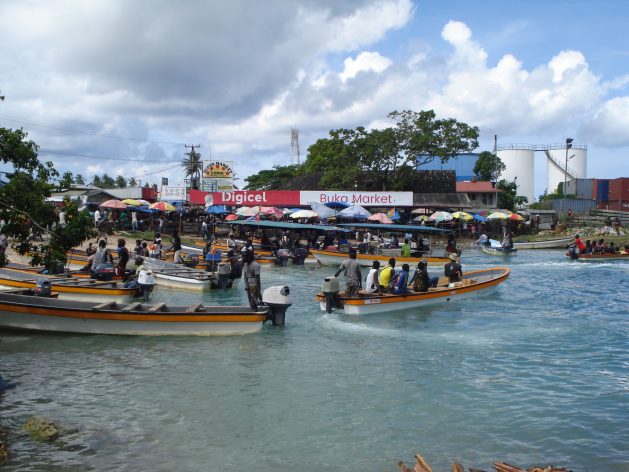 Following an almost unanimous 97.7 percent referendum vote in November of last year for Independence from PNG, the people of Bougainville returned to the polls last month to decide on a new government. Bougainville's main town of Buka. Credit: Catherine Wilson/IPS

CANBERRA, Australia, Sep 29 2020 (IPS) - Ishmael Toroama, a former revolutionary leader and fighter during the decade long civil war which engulfed the remote islands of Bougainville in Papua New Guinea (PNG) in the 1990s, has been elected the autonomous region’s new President ahead of high-level talks about its political future.

“I, as your mandated President, am ready to take Bougainville forward, focussing on law and order, anti-corruption policies, the [referendum] ratification process and improving the fiscal self-reliance of Bougainville,” Toroama said in a public statement on the occasion of his swearing in as President in the region’s main town of Buka on the Sept. 25. He will be supported in a caretaker government for the next two weeks by his new Vice President, Patrick Nisira, MP for Halia constituency in North Bougainville, and Therese Kaetavara, Women’s Representative for South Bougainville.

Toroama, who defeated 24 other presidential candidates, is a strategic choice. Following an almost unanimous 97.7 percent referendum vote in November of last year for Independence from PNG, the people of Bougainville returned to the polls last month to decide on a new government. It is now tasked with carrying the autonomous region on a challenging political journey toward the long held local aspiration for nationhood.

“The referendum was a turning point…looking at all the 25 candidates, people were looking for who could deliver and successfully talk about Independence [with the PNG Government],” Aloysius Laukai, Manager of the local New Dawn FM radio station, told IPS. Laukai claims that “the election was conducted well” and widely accepted as free and fair. The campaigning and voting periods were reported as organised and peaceful, in spite of some alleged cases of misplaced voting papers.

The islands of Bougainville, with a population of about 300,000 people, are located more than 900 kilometres east of the PNG mainland. Bougainville hit the world headlines in 1989 when an indigenous landowner uprising against the then Rio-Tinto majority owned Panguna copper mine on Bougainville Island escalated into a civil war which raged on until a ceasefire in 1998. The peace agreement, signed in 2001, provided for establishing an autonomous government, which occurred in 2005, and a referendum on the region’s future political status.

Despite having only one recorded case of COVID-19, to date, the Bougainville government declared a state of emergency in March, which led to the delay of the general election, originally planned during the first half of this year.

Former President John Momis, who has led Bougainville for the past 10 years and been a prominent local political leader and figure of stability for more than four decades, bowed out of the race, having served the maximum two terms in office.  The field then mushroomed into an unprecedented more than 400 candidates vying for 40 parliamentary seats and 25 hopefuls for the presidency.

Alluding to the stakes ahead, Momis called for unity as voters turned out to cast their ballots from Aug. 12 to Sept. 1. “Let us all walk this journey together as one people and one voice to decide our leaders for this next government that will lead us to our ultimate political future that is within the confines of democratic values and international best practice standards,” Momis stated on Aug. 17.

While also a pro-Independence advocate, Momis, a former Roman Catholic priest with extensive experience in peacetime politics, is a contrasting figure to Toroama. His achievements include serving in the national parliament, playing a major role in the region’s peace negotiations and serving as Bougainville’s governor after the conflict from 1999 to 2005.

The new President was a commander in the Bougainville Revolutionary Army, a guerrilla force which instigated an armed uprising following grievances about the environmental devastation and economic inequity associated with the foreign-owned Panguna mine. He has not been a political leader or served in government administration, although he played a vital role in the peace talks which ended the conflict. More recently, he has been a successful cocoa farmer.

Geraldine Valei, Executive Officer of the Bougainville Women’s Federation, offered another perspective on the overwhelming support Toroama received at the ballot box. “The reason why we say that he is the right person is because, in our Melanesian way of resolving conflicts, if you start the war then you are the one to resolve it,” Valei told IPS, adding that, “he [Toroama] will, of course, need support from very good advisors to lead as President.”

Toroama’s rivals for the top office included James Tanis, who held the office of President briefly from 2008 to 2010, another former rebel ex-combatant, Sam Kauona, and local businessman, Fidelis Semoso. There were also two female candidates in the running: Ruby Miringka, a healthcare professional who has also worked for the Bougainville Referendum Commission, and Magdalene Toroansi, a former Bougainville Minister for Women.

Bougainville’s fourth government will face enormous challenges in the next five-year term to build a weak economy, improve governance and the capacity of institutions, all still in need of reconstruction and development following widespread destruction on the islands during the conflict.

Valei told IPS that she would like to see the new President “strengthen good governance, have zero tolerance of corruption, strengthen law and order and advocate for the ratification of Independence from Papua New Guinea”.

Toroama also faces huge public expectations to bring about the region’s long held dream of Independence.  Aspirations for self-determination in the region pre-date both the civil war and PNG’s Independence. The islands of Bougainville were brought under the umbrella of the new Papua New Guinean nation in 1975. But they are geographically located far from the PNG mainland and the islanders trace their ethnic and cultural kinship instead to the Solomon Islands, an archipelago to the immediate southeast of Bougainville.

However, the decisive result of last year’s referendum is non-binding. Long and complex negotiations between the PNG and Bougainville governments to agree the region’s new political status will occur over the coming months and years. Talks at the national level will be informed by input from local forums in Bougainville, comprising representatives of communities, ex-combatants, business leaders, women and youths. The final decision will then be ratified by the PNG Parliament. There is no deadline for this process, but Toroama has indicated he would like a decision reached within two to three years.

PNG’s Prime Minister, James Marape, has voiced his support and respect for the process ahead and the wishes of the Bougainville people. “I look forward to working with President-Elect Toroama in progressing consultations on the outcome of the recent referendum and securing long term economic development and a lasting peace for the people of Bougainville,” Marape said in a statement issued soon after the election results were announced.

Yet, the PNG Government is known to not favour full secession, preferring the region to remain within a ‘united’ PNG under a form of greater autonomy.

Looking ahead, economic experts claim that, with a weak economy and heavy dependence on international aid and funding from the national government, Bougainville would face a long period of transition to being an economically viable state, potentially up to 20 years.