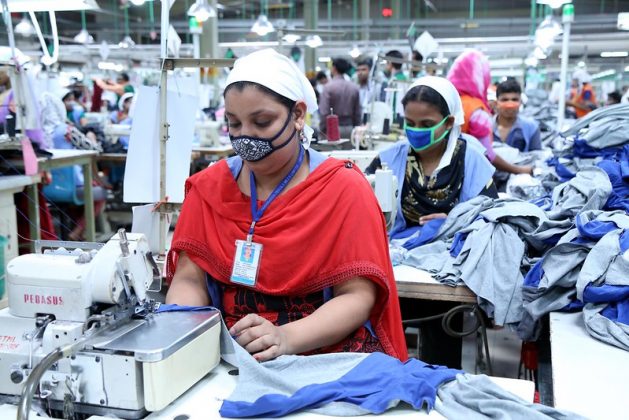 Organisers and activists came together last week to discuss how the fast fashion industry sits at the intersection of environmental and gender justice. The industry, which discriminates against women from the production cycle to the consumption of it, contributes to environmental degradation as two million tonnes of textile are discarded every year.

“We hoped to encourage people to look at the connection between women’s oppression – the pressure to look good, to be fashionable, that their bodies are not good enough – and the oppression of women worldwide in the garment sweatshops of the world,” Su Edwards, organiser of the panel, told IPS.

“We wanted to raise awareness of the vast resources consumed by fast fashion and the resulting pollution and devastation of the natural world,” she added.

The panel shed light on the importance of women from the global north creating a bridge to work in solidarity with women in the global south.

“We are very keen to emphasise the unity between groups that are often seen as having divergent interests,” Edwards said. “Fashion is a good place for women to find common interests and to begin to understand that their life choices may impact on their sisters in other places.”

The only representative invited to speak about the issue was Sumedha Shivdas, a fashion designer  from India.

“We wanted to include at least one woman from the global south in our panel and Sumedha is part of our organisation,” Edwards said when this issue was addressed. “The point was that she had heard about the Rana Plaza disaster but was numb about it.”

On environment, panelists stated that it takes 12 years to get rid of waste that fast fashion makes in 24 hours.

Beyond environmental concerns, fashion also has a large role to play in one’s identity. One of the highlights of the panel was Josephine Carter, a queer artist-activist and panel member who spoke about the role fashion plays on the intersection of environmental justice, human rights, and identity.

For Carter, identity is at the center of her activism. She is currently working on a poetry project honouring black men for Black History month in the United Kingdom.

“This work feels deeply relevant at the moment, as we’re once again reminded of how endangered black lives are, and of the particular forces of white supremacy which work to endanger black men particularly,” she told IPS.

This relevance is further deepened by the environmental concerns around the world.

“I am thinking, writing and working my way towards climate activism, and finding a way to make this inextricable with the activism work I already do, on race, gender, sex and class,” she said.

For the panel talk, her aim was to have her message reach women and have them engaged in the conversation on climate crisis, and for them to realise how urgent and relevant it is to their lives.
Another goal for her, as well as that of the workshop’s, was to convey the message that for activists, their emotions are very intricately linked with doing the work of climate justice. Understanding that link, and figuring out which measures work and what needs improvement, can help unlock opportunities for climate justice initiatives that are effective.

Inter Press Service (IPS): What role has fashion played for you in your identity?

Josephine Carter (JC): As a queer woman of colour, I got to explore how people with my identities get pushed in two different directions – to use fashion and dress as self-expression, or to use fashion and dress as a way to conform to a heteronormative and cisnormative society. Not only do big feelings about ourselves and our bodies come up as a result, there are also real-world consequences to conforming or not conforming.

IPS: The intersection of fast fashion, environment and the queer community aren’t usually examined together. What does this intersection tell society?

JC: The reality is that over consuming fast fashion clothing, either to stand out or to fit in, doesn’t come without environmental consequences. Once we accept that the ecologically degrading and exploitative fast fashion industry can’t be allowed to continue, for the sake of the planet and its people, we then have to reconsider our relationship to clothes and reckon more closely with the presence of homophobia and transphobia in our lives.

As mentioned in the workshop, a part of the work of achieving climate justice is the elimination of all oppressions. Bringing together the topics of fashion, environment and queerness (or other identities) shows that the climate crisis actually permeates all areas of our lives and experiences, even areas that might seem unrelated at first glance. It goes, I hope, a little way towards demonstrating that there are a thousand reasons for every person alive to be active in the fight for climate justice, including people who usually get left out of the climate movement.

IPS: What role do you believe fashion plays a role for queer and gender non-conforming communities?

JC: Experiences with fashion in queer and gender non-conforming communities are as diverse as the communities themselves. While I can’t speak for these communities as a whole – especially as a cisgender queer woman – I notice that fashion provides an opportunity for self-creation, for queer and trans people to reclaim their bodies from oppression and dysphoria. Because clothing is so gendered, it can be a useful tool for exploring and subverting the gender binary. It can also be an outlet for creativity, self-expression and sheer joy in queer lives which are so often marred by interpersonal and systematic homophobia and transphobia – from workplace discrimination to homelessness, from medical mistreatment to hate-motivated violence.

IPS: What other roles does fashion play in this conversation?

JC: Conversely, fashion can also play a role in keeping queer and trans identities hidden, especially when individuals have to conform to heteronormative and cisnormative gender roles because of an oppressive family environment, community or government. The necessity to stay hidden and the harshness of the punishment of visibly queer and trans people increases as homophobia and transphobia overlap with other systems of discrimination such as race, class and disability.

IPS: How has your identity as a queer person shaped your relationship with fashion?

JC: I use clothing to announce my queer identity and to hide it. Some of the pressure that is put on heterosexual women to look “feminine” and attractive according to our culture’s norms actually passes me by, and I love putting myself out in public as a weird, fat, butch, boxy, short, black queer woman when I wear dungarees, Doc Martens, men’s clothing, and the rainbow flag. It works as a way to signal to other people in the LBGTQ community that I’m here, that we see each other, that I stand in solidarity with a queer aesthetic and heritage.

I also sometimes get slurs yelled at me on the street, have disparaging comments made about my body by strangers, and am generally made aware that I don’t look how a woman “should” look. It’s interesting that the defining aesthetic categories for queer women, butch and femme, separate us out into who “looks like a woman” and who doesn’t. I remember many occasions as a teenager and young adult where I have tried and failed to look feminine, attractive and acceptable.

I use fashion as a way of constructing my queer identity, and fashion constantly reminds me that society’s idea of what’s acceptable for women’s lives is still very narrow.