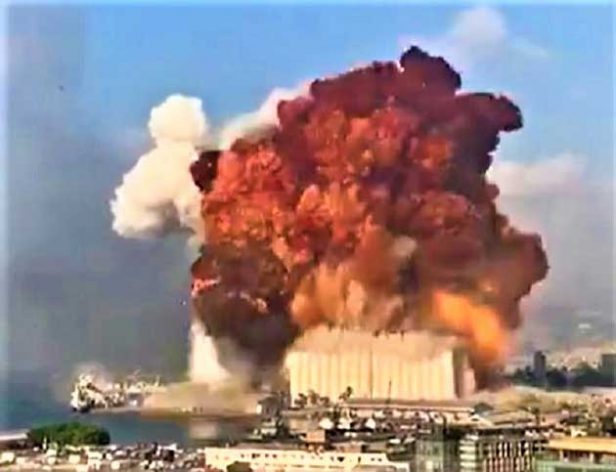 STOCKHOLM / ROME, Oct 7 2020 (IPS) - The 26th of September, the Lebanese prime minister Mustapha Adib stepped down after less than a month on his post. The president, Michael Auon, stated: ”Lebanon will be going to Hell if a new government is not formed soon.” The question is if his nation is not there already. A horrifying image of the state of the nation was provided on the 4th of August when 2,750 tons of ammonium nitrate, stored in a dockside hangar, blew up in an explosion killing more than 190 people, injuring 6,500 and damaging thousands of buildings.

Before a Civil War engulfed the country from 1975 to 1990 Lebanon was called the Switzerland of the East, enjoying a thriving culture, freedom of expression and a diversified economy that included tourism, agriculture and banking. Now, Lebanon suffers from endemic corruption, fifty-five percent of its population live below the poverty line, while more than 30 percent is unemployed. During the past year food prizes increased by 367 percent.

The first and only time I visited Lebanon was in 1978. My friends and I had been on our way to Baghdad, trying to follow the tracks of the Berlin-Baghdad Express. The entire stretch of this legendary railroad was no longer navigable, but we had read that most of the rails and stations were still intact. The railway was built between 1903 and 1940 to connect Berlin with the Persian Gulf. It had been financed by the German Government to gain access to Middle Eastern oil and facilitate provision of goods and supplies to German colonies in Africa and the Pacific. Furthermore, the railway was a strategic move to diminish Russian and British interests in the area. Even if World War I, the fall of the Ottoman Empire, loss of the German colonies and almost innumerable other obstacles delayed its construction, the Nazi regime could in 1940 celebrate the railway´s completion.

We came as far as Aleppo, where the rails turned east toward the Iraqi border, from there we took a bus to Damascus to apply for visas. However, at Iraq´s embassy we were told: ”Why travel to Baghdad? In these days life is complicated there. Go to Beirut instead, you´ll like it there.” A run-down taxi took us the 100 kilometres from Damascus to Beirut. Along the route we were repeatedly stopped at Syrian check points (the Syrian Army had in 1976 intervened in Lebanese internal fighting). When the startlingly young soldiers saw our worried looks they told us in broken English: ”Please, don´t worry. Beirut is fine, you´ll have a good time there.”

For Europeans like us Beirut looked strangely familiar, though destruction and desolation made us feel as if we had ended up in a parallel reality. We walked along The Corniche, the seaside promenade. On our left side were demolished apartment buildings and hotels, remains of the Battle of the Hotels that had raged the year before, characterized by heavy exchanges of rocket and artillery fire from various hotel rooftops and rooms. A postman passed by the ruins, placing letters and packages on the ground in front of them. To our left was the Mediterranean Sea, lined with stumps of palm trees. In front of a ruined hotel was an open-air restaurant with smartly dressed waiters attending an apparently wealthy clientele. Out on the sea, yachts lay anchored and speed boats raced by, towing water-skiers.

Lebanon means ”milky white”, probably in reference to its mountain peaks, which for more than half of the year are graced by snow. These inaccessible highlands are one of the reasons for Lebanon´s uniqueness. For thousands of years they have been a refuge for persecuted minorities. Maronites deriving their name from the Syriac Christian saint Maron had in the highlands been able to maintain their independence and religion. Their territory bordered areas controlled by the close-knit communities of the Druze, who do not identify as neither Muslims, nor Christians. Their scripture, Epistles of Wisdom, includes traits from the entire Middle East area finding their roots far back in age-old traditions. There were also Alawite communities sharing a faith considered to be Shiite, though their theology and rituals differ from mainstream Shia Islam. They do for instance drink wine and believe in reincarnation. In the Bekaa Valley and Southern Lebanon we find mainstream Shia Muslims, while the coast has traditionally been the territory of Sunni Muslim traders.

For thousands of years, refugees have found a haven in Lebanon. During the Armenian genocide in 1915, persecuted Armenians poured in from Turkey, their descendants now amount to approximately 150,000. Palestinian refugees arrived after the proclamation of the Israeli state in 1948 and now constitute approximately 300,000 of Lebanon´s inhabitants. During the recent Syrian crisis, 1.5 million refugees have arrived. With a population of seven million Lebanon is currently home to more refugees per capita than any other country in the world. At the same time the Lebanese diaspora is among the largest in the world. At least 10 million Lebanese live outside their country of origin and of them more than one million have maintained their Lebanese citizenship.

Lebanon is one of the few Middle Eastern nations that has been able to maintain its status as a democracy where free speech and tolerance are honoured, this in spite of more then forty years of constant clashes between its different population groups. On top of these calamities, the nation has during the last century suffered from foreign incursions. France, the U.S., Israel, Syria, Iran, Turkey, Egypt, Saudi Arabia, and Libya have meddled in Lebanese politics. Armed forces from some of these nations have even invaded parts of the country, trying to take advantage of internal power struggles.

The same pattern was apparent when Germany through the Berlin-Baghdad Express initiative tried to tap the Middle East´s oil wealth, making the Middle East one of the scenes for power games between ”world-leading” nations, a tragedy that since then has continued unabated. Recently it was estimated that Lebanon´s 22,700 km2 offshore area may contain at least 95.9 trillion cubic feet of gas and 865 billion barrels of oil, thus wetting the appetite of not only its neighbours, but that of France and Russia as well, at the same time as powerful nations continue to consider Lebanon as a pawn in their game for world dominance.

Clans and influential families have for centuries dominated Lebanese politics and done so with foreign support. A situation further complicated by the fact that when clan members moved into formerly unknown territories family ties were often weakened, while traditions and religious convictions remained. It became important not where you came from, but whether you considered yourself to be a Druze, Maronite, Shia- or Sunni Muslim, Palestinian or Syrian, Armenian, Alawite, Greek Orthodox, or Catholic Christian. This is mirrored by a political system dictating that Lebanon’s president has to be a Maronite, the speaker of parliament a Shiite, the prime minister a Sunni and the deputy prime minister Greek Orthodox. Parliamentary seats are shared out proportionally among 18 religious groups, while public sector jobs are divided up among sects. Political parties use ministries to dole out jobs to their followers.

An anomaly discernible during the last months political development. Answering to socioeconomic demands, while seeking support from the country´s traditional political elite, the mainly Shiite Amal and Hezbollah parties were in October 2019 instrumental in bringing down the government of Saad Hariri. The president Michael Auon, a Maronite and former brigadier general who had fought pro-Syrian Druze and Palestinian militias, signed a memorandum of understanding with the two parties, making their parliamentary bloc dominant, though their disagreement about who is going to be finance minister is now blocking the formation of a new government.

Amal and Hezbollah supporters share cities and villages, while both parties are supported by Iran´s Shia government and Syria´s Alawite dominated regime. However, slight ideological differences and fierce competition for decision making positions caused a three-year conflict between the two parties, involving bombings, kidnappings and psychological warfare. In 1990, Iran and Syria brokered peace and convinced them to form an alliance.

Lebanon remains entangled in extremely complicated, clan- and family based politics. Some examples; the powerful Druze leader and socialist Kamal Jumblatt, was a supporter of PLO and backed by Syrian politicians who later became his enemies. Jumblatt gave crucial support to the Maronite Camille Chamoun (president 1952-1958), whose son Dany became leader of the Maronite militia, while his brother Dory led a coalition of politicians opposed to Syrian influence over Lebanese politics. After Dory suffered a heart attack in 2012 his son Camille Jr. now shoulders his father´s political commitments. After Kamal Jumblatt´s death, his son Walid became the leader of the Druze fraction of Lebanese politics. A powerful enemy and sometime ally to both the Jumblatt and Chamoun families was the Maronite Bachir Gemayel, a parliamentary power broker, allied to France. Gemayel saw his son Bachir elected President in 1982, only to be assassinated a week before his inauguration. His older brother Amine was elected to replace him.

President Saad Hariri who a year ago was toppled by the Shiite coalition fits well into this complicated pattern of related politicians. Serving as prime minister 2009-2011 and 2016-2019 Saad is the son of Rafik Hariri, a business tycoon who was prime minister 1992-1998 and again 2000-2004. A Sunni Muslim supported by Saudi Arabia, the U.S., and France, Rafik embarked on an aggressive economic policy based on privatization of major companies, foreign direct investments, and tax breaks. After an unprecedented rise, the GDP soon fell drastically, not hindering that Hariri´s personal wealth grew from one billion USD in 1992 to over 16 billion when in 2005 an explosion killed 23 people, including Hariri. On 18 August 2020, the Special Tribunal for Lebanon unanimously found Salim Jamil Ayyash guilty of the assassination. Ayyash, who is at large, is a member of Hezbollah and the verdict is now affecting Hezbollah´s prestige among the Lebanese.

COVID-19 adds fuel to the Lebanese disaster, while talks with IMF over a recovery plan involving a bid for 11 billion USD has stalled over disagreements between Lebanese politicians on assessing losses.

What about the disastrous 4th of August explosion? On the 21st of November 2013, MV Rhosus ported in Beirut. This huge freighter had embarked from Georgia with a cargo of ammonium nitrate destined for a factory in Mozambique, owned by a Portuguese company suspected of providing explosives for the 2004 Madrid train bombings. After inspection by the port authorities Rhosus was found unseaworthy and forbidden to live the port. The owners claimed bankruptcy and following a court order Rhosus´s cargo was sometime in 2014 brought ashore and kept in a sealed hangar. Four years later Rhosus sank just outside Beirut´s port.

The Rhosus tale is complicated, smelling of corruption and arms trafficking. It involves a shady set of actors – Cypriot, Portuguese and Russian businessmen, the Lebanese bank FBME and possibly Lebanese militia.

It is easy to get lost in the labyrinth of Lebanese politics and to avoid this I finish by taking consolation in my Beirut memories – of the postman making his rounds, delivering letters to owners of ruins and how people in spite of the mayhem around them went on with their daily chores and welcomed strangers in their midst. It is something of a miracle that a heartening, thriving mosaic of people and cultures still persists in Lebanon.