Dr Asoka Bandarage*, a scholar and practitioner, has taught at Yale, Brandeis, Mount Holyoke (where she received tenure), Georgetown, American and other universities and colleges in the U.S. and abroad. Her research interests include social philosophy and consciousness; environmental sustainability, human well-being and health, global political-economy, ethnicity, gender, population, social movements and South Asia. 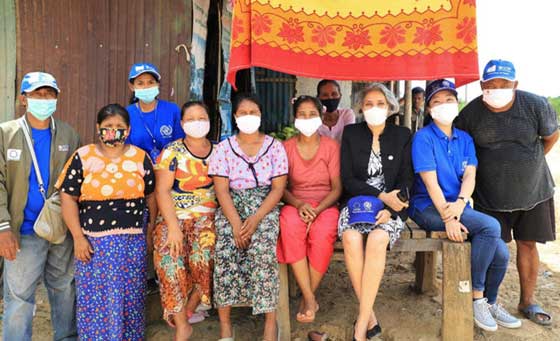 COLOMBO, Sri Lanka, Nov 10 2020 (IPS) - SARS-CoV-2, the corona virus that causes COVID-19, has been spreading exponentially across the world over the last ten or so months. As of November 6th, according to the Center for Systems Science at Johns Hopkins University, there have been 49,195,581 cases of COVID-19, including 1,241,031 deaths.

More than a third of the global population has been placed on lockdown. The global economy is experiencing the deepest global recession since World War 2 and massive numbers of people are losing livelihoods and suffering serious effects on their physical and mental health.

The pandemic has allowed states and corporations to tighten technological surveillance and authoritarianism, curtailing privacy and democratic protest. As virulent second and even third waves of the pandemic speed across countries, people are gripped with fear and despair over their own survival and what the future holds for humanity.

The origin and prevention of the virus are mired in controversy and conflict between conventional and ‘conspiracy’ theories.

This unprecedented, multi-faceted global crisis, however, calls for deeper exploration and broader discourse on its causes and long-term solutions. Biomedical science, social science and ecological and ethical perspectives need to be integrated to overcome this pandemic as well as other pandemics predicted in the years ahead.

Controversy over Origin and Prevention

Given the lack of media coverage, there is scarce public awareness of the likely laboratory origins of previous pandemics like the H1N1 outbreak of 1977-78. The global scientific and media establishments attribute the origin of COVID-19 to an animal-to-human (i.e. zoonotic) transmission at a seafood market in Wuhan, China, in December 2019.

While US intelligence sources also originally asserted this, they conceded in March 2020 that the pandemic may have originated in a leak from the lab at the Wuhan Institute of Virology in China.

The Wuhan Institute is linked to the US army’s Defense Advanced Research Projects Agency (DARPA), which does research and testing involving bats and coronaviruses and gene editing ‘bioweapons’.

The Wuhan Institute also has a close, decades-old partnership with the US Army Medical Research Institute of Infectious Diseases (USAMRIID) in Maryland, the leading US military laboratory for ‘biological defense’ research. USAMRID is known for periodic shutdowns due to its problematic record on safety procedure.

Gain-of-Function Research (GOF) involves “manipulating viruses in the lab to explore their potential for infecting humans.” This type of research is criticized by many scientists on ethical grounds because of the risks GOF viruses pose for human health from accidental release. Due to public health concerns, in October 2014, the US government banned all federal funding for efforts to ‘weaponize three viruses’: influenza, Middle East Respiratory Syndrome (MERS) and Severe Acute Respiratory Syndrome (SARS).

In the face of this ban in the US, Dr Anthony Fauci, the director of the National Institute of Allergy and Infectious Diseases (NIAID), reportedly “outsourced in 2015 the GOF research on bat coronaviruses to China’s Wuhan lab and licensed the lab to continue receiving US government funding.”

In early 2018, US embassy officials in China raised concerns about “inadequate safety” at the Wuhan Institute of Virology. US science diplomats warned that, due in part to a lack of adequate safety personnel, the research that the lab was conducting in relation to bats “represented a risk of a new SARS-like pandemic.”

Yet, action was not taken and despite the controversies, Dr. Fauci was appointed as the leading doctor in the US Coronavirus Task Force and continues to function in that position.

Hollywood films, such as 2011’s Contagion presented eerie premonitions of the COVID-19. In 2015, billionaire and global population control proponent, Bill Gates warned of a huge threat of a global pandemic.

A pandemic simulation called Event 201 was conducted in October 2019 by the Johns Hopkins Center for Health Security in partnership with the Bill and Melinda Gates Foundation and the World Economic Forum projected up to 65 million deaths due to a coronavirus.

However, the global biomedical, political and business leaders who were well aware of the impending Covid pandemic did not take the precautionary action needed to safeguard people. The United States, Europe and other countries found themselves without adequate testing kits, respirators, hospital beds and medical personnel when the virus started to spread.

A failure of leadership lies behind the massive destruction of human life, livelihoods and social life that we are experiencing today.

While lockdowns, curfews and the isolation of entire communities and regions seem to be the norm, the effectiveness of this approach and its enormous negative consequences on the economy, society and mental health are coming into question.

The success of the mainstream approach depends on a host of local socio-economic factors, such as the age of the population, health infrastructure, leadership, mobilization of people as well as just, uniform and compassionate enforcement of preventative measures.

Double standards in enforcing Covid health protocols can contribute to resentment and weaken overall conformity jeopardizing the health and safety of entire populations. Apparently, under strict Covid guidelines in Australia, some individuals have been prevented from visiting with dying family members while at the same time, VIPS and celebrities have been exempt from strict quarantine measures.

Likewise, in Sri Lanka, high powered delegations from China and the United States (led by Secretary of State Mike Pompeo) arrived in the midst of the worsening second wave in October 2020, seemingly foregoing national Covid guidelines.

Many countries in the global south, such as, Vietnam, Cambodia, Senegal and Rwanda have contained the pandemic more successfully than the United States and the rich European countries.

As of November 1, Rwanda and Senegal, reported 0.28 and 2.04 Covid deaths per 100,000 people respectively, whereas the corresponding number for the US is a staggering 70.4.

The vast majority of those infected recover easily and only the elderly and those with other pre-existing illnesses are the most vulnerable. Thus far, on November 6th, of the total confirmed 49,195,581 cases, 32,368,883 have recovered.

Given this reality, many epidemiologists are suggesting ‘focused protection’ of the most vulnerable groups, allowing the rest of the population to develop ‘herd immunity;’ the point at which the majority of a population becomes immune and limits the spread to those that are not immune.

Sweden is the leading example of a country that went against the global norm of mandatory lockdowns, social distancing and use of face masks. Sweden experienced much higher numbers of cases and deaths than its Scandinavian neighbors during the first wave of the pandemic.

However, Sweden has had relatively fewer deaths during the current second wave while other Scandinavian and European countries which imposed strict lockdowns early in the pandemic are facing massive spikes in infections and deaths.

Given the relative failures of the mainstream lockdown approach and its negative socio-economic and psychological impacts, alternative long-term approaches like that of Sweden warrant consideration.

A May 2020 report from the Center for Infectious Disease Research and Policy in the US suggested that the COVID-19 outbreak will not end until 60% to 70% of the human population becomes immune to the virus, which could take anywhere from 18 to 24 months.

Meanwhile, many virologists and global leaders argue that the only way to eradicate the virus would be with a vaccine ‘delivered to every human being’ as quickly as possible. Pharmaceutical companies are now racing to provide a vaccine, the magic bullet to end the pandemic, and a highly profitable one at that.

However, there is no certainty that a vaccine against COVID-19 would act as effectively as previous vaccines against viruses such as smallpox.

The Gates Foundation, which has funded the UK’s Pirbright Institute that is currently working on a vaccine against COVID-19, stands to benefit from vaccine marketing. Bill Gates is calling for a ‘digital certificate’ to identify individuals receiving the upcoming COVID-19 vaccine.

Backed by a massive organization called ID2020, these certificates are expected to grant access to other social and economic rights and services. Mass vaccination to eradicate COVID-19 is seen as the opportunity to introduce a worldwide digital ID, and ID2020 is already testing one in Bangladesh that is ‘biometrically-linked’ to fingerprints.

Reportedly, a ‘covert way to embed the record of a vaccination directly in a patient’s skin’ – called a ‘quantum dot tattoo’ – is also being researched at MIT with support from the Bill and Melinda Gates Foundation.

What would happen to those who refuse to get vaccinated for COVID-19, or other mandatory, possibly gene-altering, vaccines in the future? Will they be denied access to essential services and cast off from society?

Do the kind of research and practices introduced in the name of disease prevention, such as Gain-of-Function Research and bioweapons development, pose greater threats than they provide protection of human and planetary life?

And how do the unprecedented shifts in human behavior seen this year, with increasing reliance on artificial intelligence, undermine age-old patterns of human connectedness to nature and to each other?

Notwithstanding political and cultural differences, the rising economic power of China is pursuing the same growth driven developmental model as the declining Euro-American alliance. The pandemic has brought to light the dangers inherent in this technology- and market-driven system.

While conventions against biological weapons and bans of Gain-of-Function Research and the like are necessary, the multifaceted Covid crisis calls for a fundamental change of the global military-industrial system.

It is said that a crisis is a turning point, an opportunity to change. To understand where and how to turn, it is necessary for more and more people to question the values of the dominant globalization paradigm, including the management of the Covid crisis.

How has prioritizing unbridled economic growth over environmental sustainability and human wellbeing contributed to the emergence of the COVID-19 pandemic? How have deforestation, climate change and human expansion into the habitats of other animals contributed to easier transmission of viruses between species?

How has the pollution of the earth’s water, air and soil by industrialized agriculture and militarism, led to the depletion of human immunity and increase susceptibility to new viruses and diseases?

How has the reliance on the globalized import and export economy resulted in massive losses of employment and shortages of essential food and medicine during the Covid crisis?

It is time to fashion a more balanced, ecological way of living that respects the environment, upholds bioregionalism and local communities. More and more people are questioning the prevailing notions of success and development and shifting to agroecology, community-based and healthier ways of living.

These developments need to be complemented with demands for greater transparency, ethics and accountability in the use of technology, especially biotechnology and vaccines against COVID-19 and other viruses.

The unprecedented COVID-19 pandemic is making people more sensitive to the fragility and insecurity of life and our physical and emotional interconnectedness to each other and the rest of nature.

The crisis can teach us to overcome fear, excessive greed and individualism and develop compassion for the suffering of humanity and other species of life. It offers an opportunity to overcome despair and powerlessness and to collectively challenge oppressive political and economic structures and turn the world in a more equitable, ecological and healthier direction.