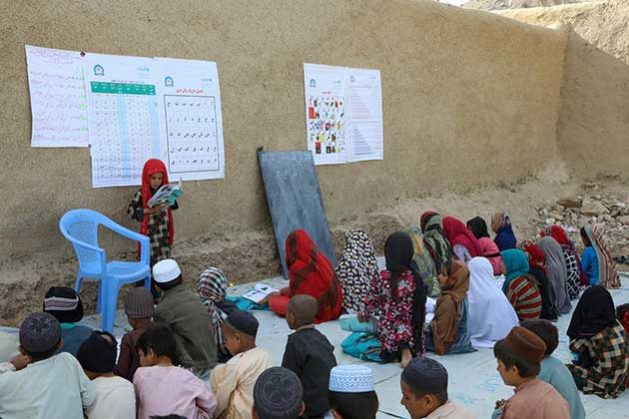 For each of the past five years, Afghanistan has been identified by the United Nations as the world’s deadliest country for children and, despite progress made in peace talks between the government and the Taliban, child and youth casualties from the ongoing conflict continue to mount in 2020.

Education itself has come under fire, with hundreds of attacks on schools and teachers. A 2018 joint report by the Afghanistan Ministry of Education and UNICEF, estimated that as many as 3.7 million children in Afghanistan were out of school, 60 per cent of them girls.

Against this backdrop, Education Cannot Wait (ECW) – the global fund launched at the 2016 World Humanitarian Summit to deliver quality education for vulnerable children and youth in countries affected by armed conflicts, forced displacement, climate-induced disasters and protracted crises – selected Afghanistan as one of the first countries to roll out a Multi-Year Resilience Programme (MYRP). The in-country Steering Committee formed to oversee implementation of the programme appointed management of the MYRP to UNICEF as a grantee.

Sarthak Pal, ECW project coordinator for UNICEF in Kabul, says Afghanistan’s MYRP was designed to focus on ‘out of school children’, by setting up community-based education (CBE) classes close to where they live. Classes are arranged mostly in private homes and sometimes in mosques for those who cannot make the long journey to the nearest school.

The first year of the MYRP – with teaching starting in May 2019 – saw some 3,600 classes established in nine of Afghanistan’s 34 provinces. This required newly recruited teachers, 46 per cent of whom are women, to teach 122,000 children. Nearly 60 per cent of the enrolled children are girls.

“When Education Cannot Wait came to Afghanistan in 2018 there were 3.7 million out of school children. These were the children and youth left furthest behind. Today, results from our multi-year resilience investment in Afghanistan are among the most promising in our global investment portfolio, especially for girls’ access to education now reaching the target of 60 percent of our investment. This shows how we can achieve education outcomes for the most marginalized children and youth in complex crisis settings by bringing together humanitarian and development actors under the leadership of the Ministry of Education. The children and youth of Afghanistan, the Afghan girls, deserve no less,” said the ECW Director, Yasmine Sherif.

One new pupil in the classes is Khalid*, an eight-year-old boy with a permanent foot disability, who was displaced by conflict from Afghanistan’s Kunar province to Nangarhar province. Previously deprived of education by war and poverty, Khalid now attends a CBE class with access to free education and books. His teacher praises his enthusiasm and creativity and says Khalid has gone from being illiterate to learning how to read, write and draw.

The closest school is 4 kilometres away from where Khalid lives, too far for him to go, but now he has a classroom just 300 metres from his home. Both Khalid’s life, and the life of his family, have been transformed. 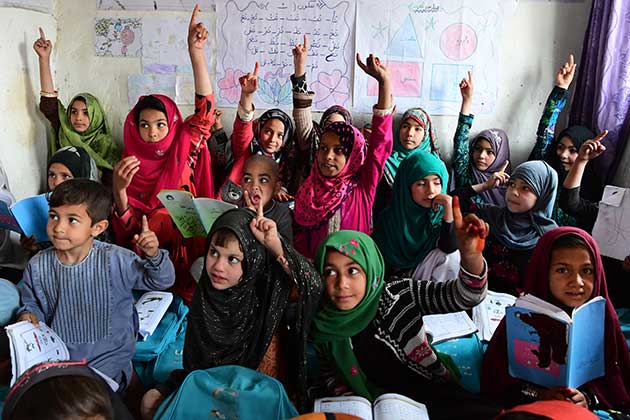 Khalid’s nine-year-old sister Hosna is able to attend an all-girls government school close-by. “In the evening, Khalid and I study together at home and help each other in our lessons,” she says, expressing how astonished she was by Khalid’s rapid improvement and capabilities. “Khalid is so intellectually improved and motivated.”

Bringing education closer to home helps secure the backing of both the community and the shuras (school councils), and is particularly effective in addressing barriers to girls’ education, such as long distances, a lack of female teachers and safety concerns. The role of School Management Shuras, or councils, has been important in building a sense of community ownership, although there are barriers to girls’ participation remains in some provinces.

ECW classes also reach children in camps set up for those displaced by conflict. Feizia Salahuddin quietly recounts in an IPS video how three of her siblings were killed. The 12-year-old girl also lost her mother. “We face so many hardships here,” she says. But then a smile appears when she describes going to ECW-supported CBE classes in Herat. “I love to study. It makes me happy,” she says.

An additional hammer blow to education this year came not from bombs or landmines but COVID-19. The government ordered all schools closed in March 2020, and CBE classes could only start reopening recently. Children affected by the impact of COVID-19 school closures now also faced increased vulnerability to recruitment by parties to the conflict, particularly boys. The crisis also exacerbated existing vulnerabilities of girls to child marriage and teenage pregnancy. 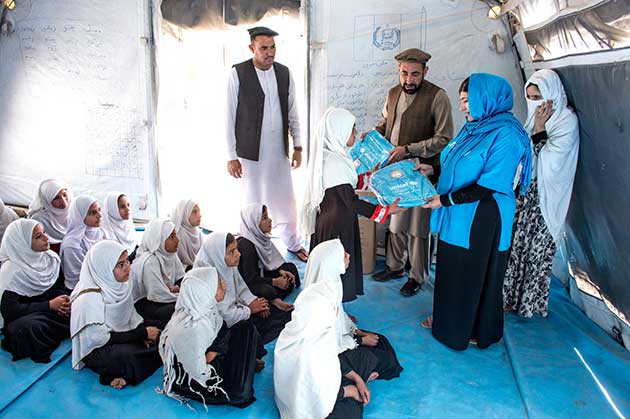 Dave Mariano, Head of Communications for Afghanistan for Save the Children International, an implementing partner for ECW, said the government had initially decided CBE classes could continue, but subsequently said teaching would have to continue via radio, television and internet, to which millions of children do not have access. Fortunately, classes eventually started to reopen with appropriate COVID-19 safety measures.

“The reopening of CBEs required a lot of coordination to ensure that necessary provisions were in place to safely reopen, such as the availability of PPE, sanitisers, and even general public awareness on how to mitigate COVID risks through basic hygiene and other practices,” Mariano told IPS.

Despite the challenges, UNICEF is already looking ahead to extend the MYRP, supported in this goal by the Ministry of Education and donors. Sweden is the largest in-country donor in Afghanistan, closely followed by Switzerland. However, UNICEF says the MYRP remains “grossly under-funded” with a 70 per cent funding gap across three years.

“We are advocating that three years of MYRP is not enough. The primary school cycle in Afghanistan is six years. We can’t leave the children half-way through. That is our main advocacy agenda now,” said Pal.

ECW has given priority in Afghanistan to improving education for girls with a focus on female teacher recruitment. This is being achieved in Herat, where 97 per cent of teachers are women and 83 per cent of students in accelerated learning classes are girls.

For girls like Feizia Salahuddin, this means a chance to start rebuilding lives shattered by conflict and displacement, giving a sense that through a classroom and her textbooks, she is once more part of a community.

“I get nervous when I get called to the blackboard, but my teachers and classmates support me,” Feizia says. “That is why I like them. They cooperate with me and teach me.”

*Names have been changed in accordance with child safeguarding and communications policies.