From Paraguay to Italy: Development at All Costs 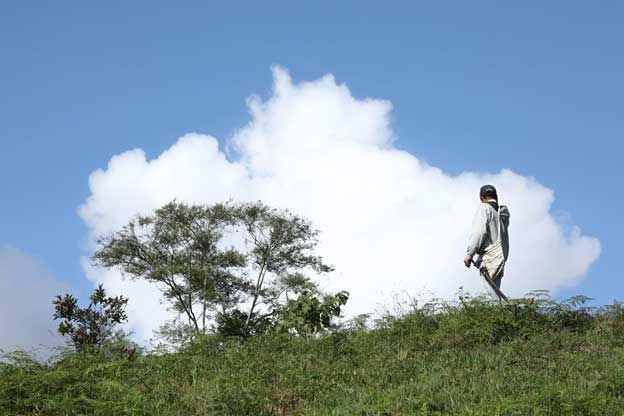 BRUSSELS, Nov 9 2020 (IPS) - I am speaking with Gladys and Raúl about civic space in Paraguay, when Raúl suddenly tells me about the fires. Thick smoke has reached the capital Asunción where he is based. In October, Paraguay became Dante’s Inferno.

Wildfires broke out across the country, with drought and record high temperatures drying its rivers and lands. Most of the fires concentrated in the vulnerable Chaco region in the west of the country. Though the Amazon gets most of the attention, other irreplaceable forests in Latin America are also under great threat.

According to Earthside, the dry forests of the Gran Chaco are disappearing faster than any other forests on Earth. By 2016, Paraguay had lost an area of forest larger than Switzerland. This trend accelerated again in 2019. That year, every two minutes, a patch of forest the size of a football pitch was bulldozed.

Raúl sends me a video on WhatsApp of a man burning land to clear it for cattle ranching. Studies have shown that no commodities in the world are more responsible for deforestation than Paraguayan beef and leather. And what is the main destination for leather? Some of Europe’s largest tanneries in Italy.

“Everything in Paraguay has to do with the climate crisis. At the moment, the middle-class doesn’t seem to suffer as much from it, but the reality is that whether you live in the big residential area or in the countryside, just like covid, the climate crisis doesn’t discriminate, it’s going to affect us all”

“We are seeing it now in Paraguay with the fires and the extreme droughts. Some of these phenomena were cyclical and normal but now they are increasingly anomalous and profound,” says Gladys. She works at POJOAJU, the platform for NGOs in Paraguay, along with Raul.

Land-grabbing and “development done wrong”, are increasing inequalities, having disastrous effects on biodiversity, and impacting negatively on Paraguay’s indigenous peoples, the Ayoreo Totobiegosode, whose numbers include the last ‘uncontacted’ peoples in Latin America outside the Amazon.

“Indigenous people are basically being wiped out; their lands usurped. We are going backwards in terms of the environment, our mountains are burning, we are aggressing nature,” Raúl explains.

But this triggers even bigger questions: who is benefiting from the current economic and development model? If it’s difficult to influence businesses operating in Paraguay, there are some critical institutions that need to hear our voices: public development banks.

From Europe to the Americas, from Asia and Africa, these financial institutions play a crucial role. Nearly 450 public development banks controlling approximately $2 trillion in public money will convene at the Finance in Common Summit, held in Paris from November 10-12.

Activists, civil society and environmental campaigners are calling for a radical transformation, and a much less “Westernised” approach to financing for development. Public development banks must not repeat the errors of the past, they can be part of the solution.

Development at All Costs

But let’ start from the very beginning. Here’s the definition from the Cambridge Dictionary. Development: defined as the process in which someone or something grows or changes and becomes more advanced. Yet, how many of us seriously question the terms and practices linked to “development”?

Growing up in Brussels, it was a buzzword that I would often hear, moving smoothly from mouths to ears, finding a righteous place in the meeting rooms of the European bubble. “Development projects”, “development finance”, “development agency”.

Always associated with the idea of progress, of things moving inevitably forward. It echoes evolution, and the natural progression of humans towards higher goals, higher dimensions. It’s linked to expansion, to exploration, to wanting more. The term itself promises something good, something superior. Development at all costs.

Talking to communities around the world we see a dichotomy between the Development Dream, its definition, and its impact. Imagine if your house had to be destroyed for a new road to be built. Wouldn’t you and your community want to have a say before it’s too late?

This issue is linked to power, democracy and transparency and it’s a matter that touches every single one of us as citizens – whether we want to admit it or not. We don’t have to look too far. Think of the thousands of people in Italy fiercely opposing a high-speed train project to the French city of Lyon, as they see it as a waste of public funds. You probably have a development project that is affecting – maybe positively, maybe negatively – your community as you read these words.

Questions need to be asked: Where does public money go? Who decides what development looks like and why? And finally, what are the alternatives to our current development models?

“The most important thing is to get close to the reality of the people, of communities. It’s not about technological innovation or about progress, it’s about knowledge,” says Pina Huaman, from ANC, the national platform of NGOs in Peru.

“I remember being in Lima at the International Monetary Fund meeting and the presenter from Mexico was telling all participants about the Peruvian miracle of economic growth. And the first reflex we had as civil society working in the field was to ask, “what miracle are you talking about?”

In the words of Teresa, from Fundación Otras Voces in Argentina, “we need to shift from ego to eco, from power over people, to power with the people”. We cannot talk about financing for development if it’s not responsive to the needs and demands of climate, gender equality, human rights, indigenous communities and biodiversity.

Being part of the development history of a country, whether in Paraguay, Peru or Italy, comes with great responsibility. We need dialogue with communities, not impositions. Few injustices have so far-stretched repercussions as development gone wrong.

The Other Side of Development

CODE-NGO, a network of NGOs in the Philippines, has a message for public development banks meeting in Paris in a couple of days: to put “social development” first.

“Financing economic development projects is not enough; it is only one side of the coin. Financing infrastructure projects may result in economic growth, but at what cost to the only planet we live on, or to people who can be adversely affected by such projects? We can look at practices that both drive economic growth and help our planet and people live at the same time.

We can build roads that do not damage ecosystems, and we can harness sources of energy such as wind and solar power instead of burning fossil fuels that are near depletion,” says Deanie Lyn Ocampo, Deputy Executive Director at CODE-NGO.

In the Philippines, asking for different models of development is risky, many human rights defenders, journalists, civil society organisations and even local residents are stigmatized and attacked for speaking up. At least 272 environmental defenders were killed between 2001 and 2019, according to the Kalikasan People’s Network for the Environment, a network of Philippine environmental organizations.

At global level, a recent Forus study conducted in 18 different countries, shows the disturbing reality of civil society facing increasingly serious restrictions on its freedom to engage, express itself and be heard.

To highlight often objectionable development approaches and insist on positive alternatives, civil society organisations published a joint statement calling on public development banks to incorporate human rights, disinvestment from fossil fuels and community-led development in the agenda and outcomes of the Finance in Common summit. Let’s start meaningfully engaging with those most affected by development activities.

If you could ask something of public development banks, what would that be? How can we promote new approaches to economic development that prioritise human rights and planetary well-being over financial interests and economic growth? How can public-private partnerships trigger the multiplying effects needed in communities? How can we create a more robust, just, ethical and equitable social-ecological economies?

We might not have all the answers, but we should at least ask these important questions.