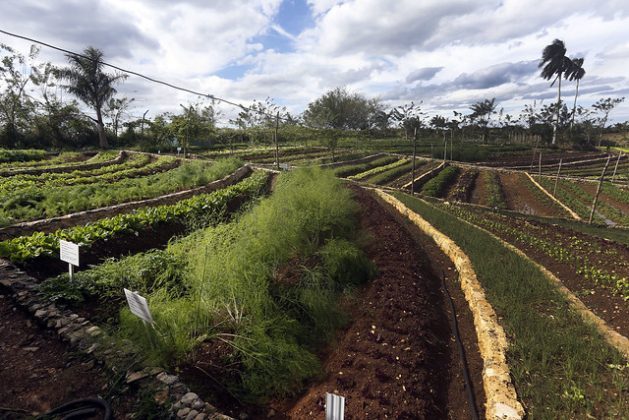 Terraces specially designed to prevent surface runoff during the rains have been key for growing vegetables on the sloping terrain of Finca Marta in the municipality of Caimito, Artemisa province, about 20 km from Havana, Cuba. CREDIT: Jorge Luis Baños/IPS

HAVANA, Jan 28 2021 (IPS) - Most beginnings are rocky and sometimes the obstacles seem insurmountable, before they are finally overcome. This was certainly the case for the Finca Marta, a farm in Cuba that had to begin by digging a well in search of water and with the hard-scrabble work of clearing an arid, stony and overgrown plot of land.

“It was an inhospitable environment, everything was totally abandoned,” agroecologist Fernando Funes told IPS. On Dec. 21, 2011, he and his family settled on an eight-hectare plot of land, some 20 km west of Havana, which they planned to farm against all odds.

“With Juan Machado, the local well digger who has become our shaman, we were digging for seven months, using only shovels, until at 14 metres deep we found water, more than we need. For us, this well is a metaphor for how far we are willing to go,” added Funes.

It was the solution to the main problem they faced in their decision to turn a relatively infertile, hilly plot of land without water into a productive farm, in a country whose water supply depends mainly on rainfall and where agriculture consumes about 60 percent of what is extracted from the watersheds.

The farm, which has 20 workers, now has a guaranteed round-the-clock water supply, from groundwater or rainwater that is harvested and stored in ponds and tanks. It is enough to cover the needs of both livestock and wild animals, as well as the crops. A solar pump now draws water from the well.

Farm management and production efficiency soon made it necessary to dedicate time and resources to the construction of greenhouses to produce seedlings, harvesting facilities, a rustic cowshed and a storage facility for beekeeping equipment and supplies, among other infrastructure.

Other efforts focused on the design of a sustainable energy system, incorporating various renewable energy alternatives such as solar panels for pumping water, a biodigester for capturing and distributing methane for cooking food, and solar water heaters.

“We have done all this ourselves by hand, with the resources, conditions and knowhow that we had,” Funes explained, after mentioning that further plans to take advantage of clean sources of energy include the installation of a windmill for pumping water and producing electricity. 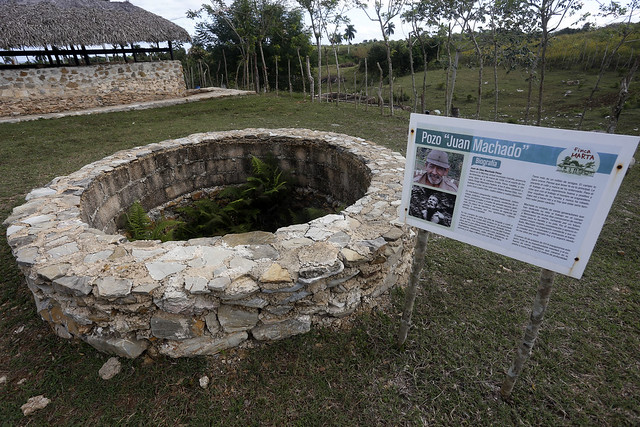 It took seven months of digging without machines on the Finca Marta to find enough water in a 14-metre deep well for the farm’s organic crops and small livestock, some 20 km west of Havana. CREDIT: Jorge Luis Baños/IPS

And terraces were created to prevent soil erosion when it rains, “on a farm where the only flat part is where the house is,” said Funes.

Each terrace has a stone wall at the bottom to prevent surface runoff during rainfall. The substrate is composed of a mixture of soil and organic matter from vermiculture and compost produced on the farm, with residue from the biodigester and other waste.

The result is the production of a variety of top-quality crops free of chemical fertilisers and pesticides, in harmony with the environment. “This gives us a comparative advantage in the market, because we offer a high diversity that gives us better chances of meeting demand,” Funes said.

Beekeeping soon became an important activity at Finca Marta, which started with one old hive. Today there are more than one hundred hives and about 40 tons of honey have been produced over the last eight years using modern techniques, mainly for export.

Forming part of a Credit and Service Cooperative, Finca Marta, located in the municipality of Caimito in the west-central province of Artemisa, markets vegetables directly to a group of private restaurants, hotels and state-owned companies, while providing certain products free of charge to a local centre that assists at-risk pregnant women. 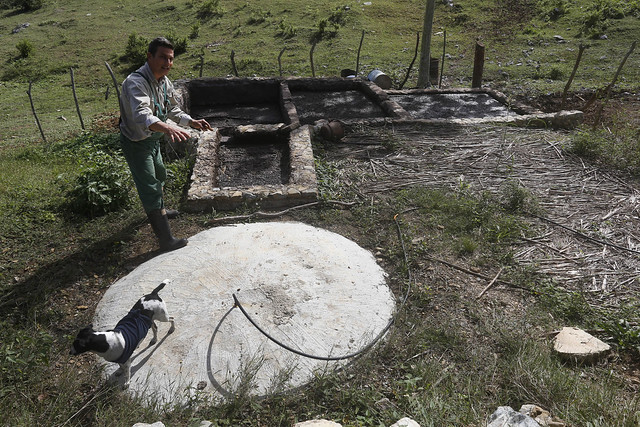 Agricultural engineer Fernando Funes explains how the biodigester works that uses livestock manure to produce biogas for domestic consumption at Finca Marta, in the municipality of Caimito, in the Cuban province of Artemisa near Havana. This is one of the innovations for the sustainable development of the farm. CREDIT: Jorge Luis Baños/IPS

“We are following a concept of production, processing, marketing and consumption. We do the whole chain ourselves,” said the agroecologist, who is determined to demonstrate in practice that it is possible to run an ecologically sustainable and socially just family farm that is also economically sustainable.

The project includes an ecological restaurant that opens once or twice a week to serve visitors interested in life in the Cuban countryside and in eating meals prepared with organic products. Agritourism boosts both knowledge and investment, because the income is reinvested in the production system.

“Coming in, we had a great deal of uncertainty, a lot of challenges ahead of us and it was very risky from every angle,” Funes acknowledged.

After four or five years of intense work, the farm was showing significant progress in terms of marketing and bringing in sufficient income to pay good wages and offer social benefits to the workers. 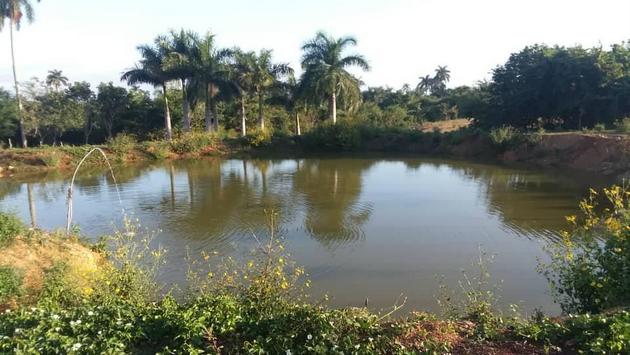 This is the largest pond dug on the Finca Marta farm for rainwater harvesting, part of the sustainable solutions used to turn a sloping, relatively infertile piece of land without water into a productive farm in the west-central Cuban province of Artemisa, which has now become a model for other farmers. CREDIT: Courtesy of Fernando Funes

“For me from the beginning it was an ethical and social commitment as a scientist for science to have an impact on the lives of people, who have to see an improvement in their income and living conditions in order to commit to a process of change,” said the agronomist.

But not only that. In his opinion, “the projection for the future is not only to continue enriching the farm, generating new jobs, and offering better wages and social benefits, but to begin to have an impact on transforming the area – that is, on local development.”

Funes, who has been dedicated to research and teaching for 20 years and has a master’s degree in Agroecology and Sustainable Rural Development and a PhD in Ecological Production and Conservation, plus 10 years of practical experience on his farm, has been part of a group of experts since October that will manage a government programme for the Development of Logistics and Supply Chains.

His farm also serves as a model for a network of 50 other farms that are adopting the concept of agroecological production, processing, marketing and consumption. 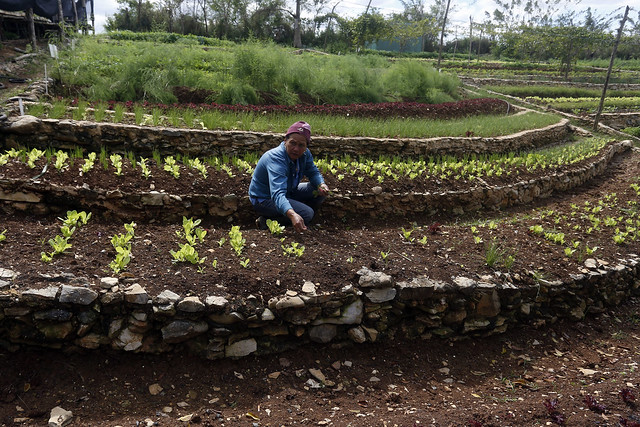 A woman plants vegetables on one of the terraces of Finca Marta, a farm using ecological farming techniques to tame inhospitable terrain with sustainable solutions, in the municipality of Caimito, in the west-central Cuban province of Artemisa. CREDIT: Jorge Luis Baños/IPS

The purpose of the government group, as announced when it was created, is to put into practice the modern concept of managing the integration, coordination and synchronisation of interrelationships, including material, informational and financial flows to supply and transform resources and products, all along the chain from suppliers to consumers.

These projects are part of Cuba’s effort to strengthen organic agriculture in domestic food production and thus alleviate the country’s dependence on imports, which cover 70 percent of food needs.

Today, this Caribbean island nation of 11.2 million people produces fresh vegetables and condiments using clean technologies on more than 8,000 hectares, where an average of 1.2 million tons of vegetables are produced annually.