Andrés Cañizález is a Venezuelan journalist and Ph.D. in Political Science 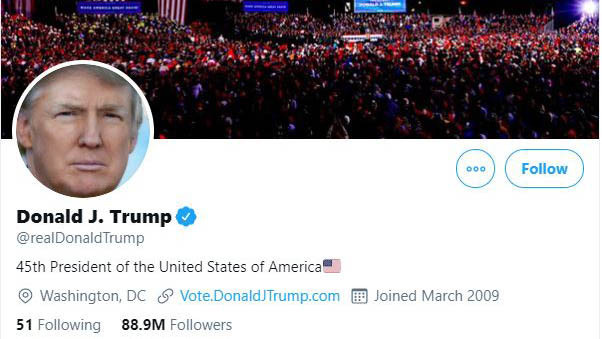 The @realDonaldTrump account on Twitter, the outgoing president of the United States' preferred platform for communication, and which was permanently suspended by the company on January 8, as was the official account as president, @POTUS. Image: Twitter

CARACAS, Jan 15 2021 (IPS) - Over the last four years, United States President Donald Trump has had in Twitter his main political communication tool. On this technological platform, he spread messages that were not entirely true, insulted and disqualified people, fired, or mocked his collaborators. Twitter was a stage for his sort of presidential reality show.

Twitter’s business decisions, initially to temporarily suspend Trump’s account, and then permanently, have ignited a heated debate, which like all those involving the United States (US), in these days of January, seems to be wrapped around extreme positions. It would be a good idea for another piece to look into how Trump precisely fueled polarization, the fruits of which are now for all to see, and how Twitter was his tool in such a strategy.

Trump and Twitter already had a love-hate relationship before the events of January 6, with the assault on the Capitol in Washington. With almost 89 million followers, Trump is the most influential head of state or government in office on this social media worldwide. Barack Obama, US president for two terms (2009-2016), is the person with the greatest number of followers worldwide, over 127 million.

Remarkably, Trump favored to communicate through Twitter. With succinct publications and by smartly using the impact of his messages among his many followers, the outgoing president not only skipped over engaging with mainstream media, but he himself had a far greater impact on Twitter than any press or TV company could have. From Twitter, he denigrated American journalism. 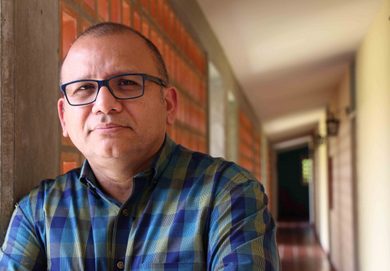 For Twitter, it was also a good business to be used intensively for four years by the most powerful man in the world, who sent out tweets at any time of the day or night, messages that were not filtered by the White House communications team. His Twitter account was a way of finding out what Trump was concerned about or up to, and thousands of news stories ended up being written based on the president’s tweets, not from the official president’s office account but from his personal account.

It should not be overlooked that this corporate decision, unprecedented in the case of a political figure with such a large following, was preceded by “misleading content” labels that Twitter decided to place on some of Trump’s messages in November 2020, in the heat of the election and counting of votes.

On claims that Trump was generating false content, which was subsequently proven to be the case, Twitter not only labeled but also even removed some tweets from the president. In my view, that seemed to be a mistake.

Then I argued that 1) a company should not restrict a discussion that was purely political; 2) politicians in the midst of a debate are not under the obligation to tell only truths; 3) without being media outlets themselves, social media are today a substantial part of the public forum; and 4) if Trump or any politician told lies, journalism was obliged to fact-check or prove it.

After the disgraceful and unfortunate events that took place in Washington on January 6, Twitter decided to suppress Trump’s account because with his messages the president would have “incited violence”. 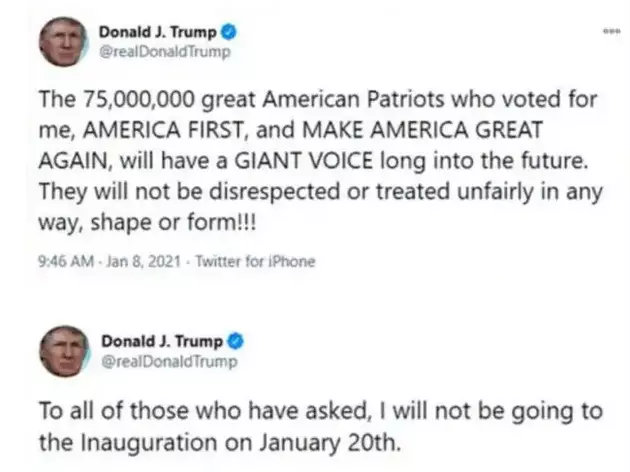 Donald Trump’s last two tweets before his Twitter account was permanently suspended, after more than 57,000 tweets generated by the outgoing US president, who had about 89 million followers. Photo: Twitter

It is quite accepted that limits can be placed on freedom of expression when messages go from being, for example, a mere insult, to proposing actions that end up unleashing violence. It was only when the crisis became a major scandal and the possibility of an impeachment on grounds of these events began to be floated that Trump finally condemned violence.

It was not the messages of just a random agitated person with a few tens or hundreds of followers. We are dealing with messages from someone who has held the main office in the world’s leading power – and will continue to do so for a few more days, with millions of followers on Twitter. This left the door open for his followers to sabotage the legislative ratification act on Democrat candidate Joe Biden’s victory, scheduled for January 6.

While some of Trump’s messages – or even silence at crucial moments – could be considered an implicit incitement or blessing of violence, the next question is whether a company alone can establish this.

I wonder if it should be Twitter, with a decision based on its corporate policies, that effectively closed Trump’s account or was this a decision that, as it was regarding freedom of expression, had to be settled in the US justice system.

I am afraid that we are facing a case in which we have irresponsible positions both from Trump, with his virulent or deceitful messages, and from Twitter by taking for itself the role of arbiter of what US and global society should read or not.

It is possible that this case will end up spurring a debate that should be urgent, but which has unfortunately been postponed given the immense economic power and political influence that such social media as Twitter and Facebook have gained.

The public defense of these platforms, in order to avoid any public debate or possibility of legislation, was precisely to hide behind the premise that their role was technological. They defined themselves as providers of technological applications to connect people, with no intervention on content. The case of Twitter and Trump proves the opposite.