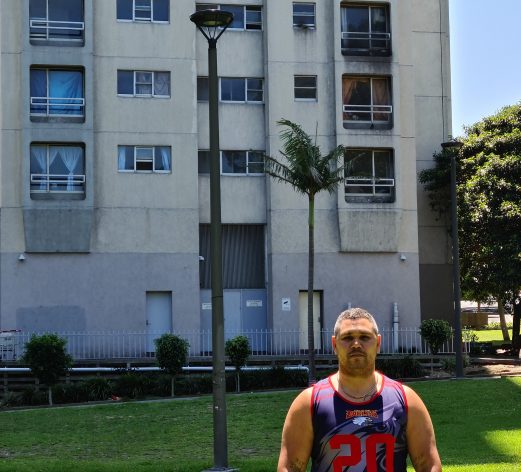 Keenan Mundine outside The Block, an Aboriginal community social housing area where he grew up. Today, he is using his own lived experience of navigating the criminal justice system that helped change the trajectory of his life to devise creative and innovative solutions for Aboriginal and Torres Strait Islander people so they can break free from the cycle of violence, police and prisons. Credit: Neena Bhandari /IPS

SYDNEY, Australia, Feb 15 2021 (IPS) - Keenan Mundine grew up in the Aboriginal community social housing called The Block, infamous for poor living conditions, alcohol and drug use, and violence, in Sydney’s Redfern suburb. At the age of about seven, soon after losing his parents to drugs and suicide, he was separated from his siblings and placed in kinship care.

“I felt robbed of my childhood. I didn’t feel safe and it made me struggle with my living conditions and mental health. I couldn’t concentrate at school and got into lot of trouble. I spent sleepless nights contemplating what my situation would be if my parents were still alive. At the age of 14, I ended up on the streets and tried to work my way around it,” Mundine tells IPS.

Today, he is using his own lived experience of navigating the criminal justice system that helped change the trajectory of his life to devise creative and innovative solutions for Aboriginal and Torres Strait Islander people so they can break free from the cycle of violence, police and prisons.

Indigenous Aboriginal and Torres Strait Islander people are globally the highest incarcerated people, making up 28 percent of the prison population even though they comprise only 3.3 percent of the total Australian population. Many are introduced to the criminal justice system at a young age, often incarcerated for trivial offences, and they remain in the system for life.

The Australian Government’s 2020 Overcoming Indigenous Disadvantage (ODI) Report notes that over-representation of Aboriginal and Torres Strait Islander people in the criminal justice system is the result of a higher prevalence of the common risk factors for offending, which stem “in part from their experience of dispossession, forced removal and intergenerational trauma and racism – structural and systemic factors including laws, policies and practices that can unintentionally operate to their detriment”.

“In 2019, the UN Committee on the Rights of the Child had recommended 14 years as the minimum age of criminal responsibility. The Australian Government must now do what is right and introduce legislation to raise the age, so children aged 10 to 13 years are not sent to prison as recommended by the national RaiseTheAge Campaign Alliance,” Australian Lawyers for Human Rights president, Kerry Weste, tells IPS via email.

“Despite the fact that indigenous children represent only six percent of young people in Australia, they comprise 57 percent of those in youth detention, and an alarming 78 percent of 10- to 13-year-old children detained,” says Weste.

The treatment these children have been subjected to could amount to a violation of the Convention on the Rights of the Child and the Optional Protocol to the Convention Against Torture and Other Cruel, Inhuman or Degrading Treatment or Punishment, which Australia has ratified.

Carly Stanley, who grew up in a large Aboriginal community in inner-west Sydney suburbs, recalls accompanying her grandmother to visit her uncle in prison and cousins in police cells. She accepted that this was normal because everyone in the community had someone behind bars. Although Stanley had a supportive family, she experienced trauma during her childhood. She dropped out of school and engaged in criminal activity and drug use, but she was fortunate not to ever have been in trouble for it.

“It is only when I got older and did a course in Aboriginal studies, learning the history of my people, did I realise that this situation was specific to our community,” Stanley, who worked for many years for government and non-governmental organisations, tells IPS. She realised that the processes and the structures in place didn’t take into consideration Aboriginal peoples’ cultural, social, economic, emotional, health and wellbeing into account.

“I tried to make changes as a senior officer inside the departments I worked for, but I realised very quickly that that wasn’t going to happen. It ignited my passion to help my people and get better outcomes for them through community-led solutions,” says Stanley, who along with Mundine established Deadly Connections, a grassroots Indigenous organisation.

Through Deadly Connections, Mundine says, “We have been able to implement direct interventions from a culturally responsive perspective to get our people social justice and participate in the economy. The government and institutions have many employment accreditation courses, but it is a big challenge to find a job when you have a criminal record.”

Research indicates that time in a juvenile justice centre is the most significant factor in increasing the odds of reoffending. On Jun. 30, 2019, 78 percent of Aboriginal and Torres Strait Islander adult prisoners had a known prior imprisonment, compared with 50 percent of non-Indigenous prisoners. Over the period 2000-01 to 2018-19, 55 percent of Aboriginal and Torres Strait Islander young people in sentenced supervision had more than one supervised sentence, compared to 34 percent for non-Indigenous young people, according to the 2020 ODI report.

While the large majority of Aboriginal and Torres Strait Islander adults in prison are male, the rate of female imprisonment is increasing more rapidly. Structural factors related to sentencing laws appear to be contributing to this increase, with 40 percent of all female prisoners being unsentenced (on remand) at Jun. 30, 2019, up from 37 percent a year earlier.

“Australia is in the midst of a mass imprisonment crisis, with the number of women in our prisons skyrocketing by 64 percent in the last 10 years. Too often, discriminatory laws and excessive police powers form a toxic combination that results in more and more women – and Aboriginal and Torres Strait Islander women in particular – being separated from their families and funnelled into the prison system,” Monique Hurley, Senior Lawyer, Human Rights Law Centre, tells IPS via email.

Since the 1991 Royal Commission into Aboriginal Deaths in Custody, which had found that ‘too many Aboriginal people are in custody too often’, Australia has lost 455 Indigenous people in custody — 295 in prison, 156 in police custody or custody-related operations and four in juvenile detention, according to the Australian Institute of Criminology’s Deaths in custody in Australia 2018-19 Statistical Report.

As Cheryl Axleby, co-chair of Change the Record, tells IPS via email, “Only by empowering and strengthening our communities – and directing funding away from a broken and harmful prison system – will we create safer and more equal communities for everyone.”

The new National Agreement on Closing the Gap includes targets for reducing the rates of adult incarceration by at least 15 percent and youth detention by at least 30 percent by 2031.

“The Indigenous Advancement Strategy Safety and Wellbeing Programme includes investing in adult and youth ‘through-care’ services, which provide intensive case management to those in prison or detention, starting pre-release and continuing post-release to address the underlying causes of offending and prevent reoffending,” according to a spokesperson for Minister for Indigenous Australians Ken Wyatt.

But Stanley says, “The measures in place are only tokenistic. However, a lot more people, especially the younger generation, are realising that a change is needed.”