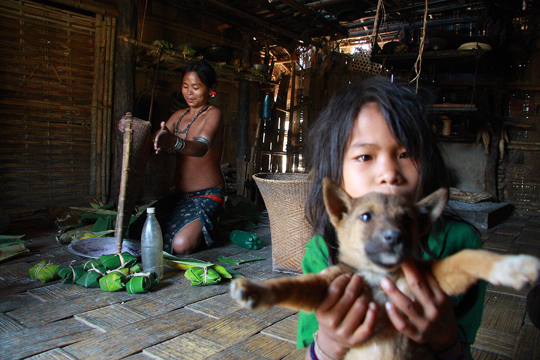 The development of a 5-star hotel on ancestral lands of the Mro indigenous community in Chittagong Hill Tracts, Bangladesh could destroy their traditional way of life, activists warn. Courtesy: CC-BY-SA-3.0/Md.Kabirul Islam

UNITED NATIONS, Nov 25 2020 (IPS) - The construction of a five-star hotel in the Chittagong Hill Tracts, Bangladesh, could lead to the forced eviction of the Mro indigenous community from their ancestral lands and destroy “the social, economic, traditional and cultural fabric of the community”, warns Amnesty International.

The hotel is expected to be built collaboratively by a welfare organisation and a local conglomerate. It is expected to affect six villages directly and about a hundred villages indirectly, according to local news.

Young, a masters student who has been protesting against the hotel, says the Mro indigenous community is living in fear of being evicted after the hotel is built. They are also concerned the construction will affect their livelihoods, potentially taking away some of their sources of income.

Many local activists from the Mro indigenous community have been organising for weeks against the project, which would spread over a thousand acres on the indigenous land in the Bandarban area in southern Bangladesh.

On Monday, Nov. 23, Amnesty International issued a statement calling for authorities in Bangladesh to listen to, and comply with, the indigenous leaders’ demands.

“The construction of a five-star hotel under these circumstances would violate the Bangladeshi authorities’ responsibility and commitment to protect and promote the rights of the indigenous peoples, rather than providing the indigenous community with the necessary support to realise their own development plans, for example by improving access to education and electricity,” read a part of the statement, calling for the project to be immediately abandoned.

A representative of the conglomerate building the hotel told the news media that the local government has an 8 percent share in the project. However, local leaders denied this, stating they do not have any such arrangement.

Young said those building the hotel must understand that the Mro indigenous community doesn’t want promises of “improvement” forced upon them as they prefer development on their own terms.

“They are completely cheating us to build this project, which will only generate profit for them, while the locals are deprived of these benefits,” Young told IPS in Bengali.

Inter Press Service (IPS): Tell us a bit about your concerns about the hotel.

Reng Young Mro (RY): The locals here have a lot of complaints about the hotel that’s being built and are living in fear about it.

Their concerns are about a range of issues: they’re having to witness construction on their ancient land. The project is [is to be developed over] a large area, where the locals have created a holy space for themselves, built graveyards and created a community. Many bank on this land to earn their living.

Meanwhile, the hotel’s project management has made a lot of plans for different kinds of entertainments such as a cable car between hills.

IPS: What are your specific concerns about facilities such as that?

RY: If there are cable cars between the hills, where the tourists are going back and forth, we are concerned about the kind of interruption this will cause in the life of the locals. There are also fears that the locals might be evicted. But the Mro community really likes to live ordinary lives in solitude, which would be hampered by this.

But it looks like roads are being dug through the villages, across the vast expanses of this area. If tourists end up frequenting these places, it will disrupt the privacy of the local people. As a result, many will either leave themselves, or they will eventually be asked to move — that is the fear.

And for an area with very little education, for a people to whom the idea of an “improved” life is rather foreign, what good will a five-star hotel do?

IPS: Do you have any fears about the protests the Mro indigenous community are organising against this project?

RY: Yes of course, we have many fears. First of all, they didn’t take any initiative to have any discussions with us. That’s why we asked for very simple conciliation, explaining that we just want to hold on to our culture, we want to continue living our normal lives.

That’s what we’re protesting for: we don’t want a 5-star hotel. And the protests will definitely affect the interests of those who are building this hotel, and so we live in fear of retaliation.

IPS: How do you respond to the justification behind building the hotel?

RY: The project building council says they’ve discussed the project with local leaders. Yes, they did speak a bit but they now targeted more places than they initially discussed. Even if they take 20 acres and build hotels, they need to discuss this with us. To the international community, our request is that this building needs to stop.

The process through which they’ve initiated to establish this is also problematic. According to any kind of legal process — whether it’s national, or local, or specific to the indigenous community — an institution is required to work in collaboration with local leaders and with their permission. None of that is happening.